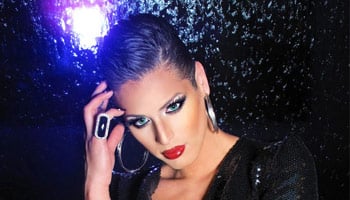 You may not know her yet but this hot looking mamacita is about to take ovah. That’s right senores y senoras Carmen Carrera is one of the latest Latinas to get cast in RuPaul’s Drag Race season 3. Make us proud mama! She’s known for her face, body, and performances where she leaves very little to the imagination. How does that bitch hide her candy so well? She’s a talented beauty that can hold her own in a group of the fiercest drag queens anywhere. All that and a hot looking boy out of drag. Some gurls/boys have all the luck. Does this Latina Jersey gurl have what it takes to take the crown as America’s top drag queen? Well, tune in Mondays starting January 24th for the premiere of RuPaul’s Drag Race season 3 to find out. For now search youtube for her past performances. Just don’t let the kids watch cause this diva to be is rated RRR!

Samara: So, you’re a Jersey girl. Tell us about growing up there.
Carmen: I grew up being the “man” of the house. My mother and my grandmother worked their 9-5, while my older sister and I kept up with the chores at home. I had no contact with my father or my father’s side of the family. Every birthday and holiday was a big party with loud music, a ton of food, and 100 family members. My sister and I had everything we wanted: we went to the Jersey shore every summer listening to freestyle music, we had a great family, and my mom made sure she was always there.

Samara: Did you have any issues with being bullied as a kid?
Carmen: When I was in kindergarten, I went to Catholic school and early on the kids made me very aware I was different. It never got to the point where I felt bullied about who I was, I just knew I did not want to be bullied so I learned how to “cover it up” or “blend in” with everyone else. Throughout middle school and high school, I knew that people knew I was or might be gay and I tried to avoid the subject completely. I tried to be friends with everyone and be this “straight” person. I didn’t want to be made fun of or get into any fights in school. My mom would of whooped my ass.

Samara: What can you say to those LGBT kids that are going through something like that now?
Carmen: Never give in and never give up! I would definitely say to stand up for who you are because I wish I did. I wish I had the pride I have now for who I am when I was growing up. It only takes one person to start a change. I think people who bully others are either raised ignorantly or have sexual orientation issues of their own. All it takes is a strong willed, confident person to open their eyes and make them understand. You can’t make people accept things they don’t want to accept, but you can give them an understanding to respect who you are.

Samara: And tell us who was the first person you called to tell them you had been cast in RuPaul’s Drag Race?
Carmen: The first person I called was one of my good girlfriends who pushed me to audition. She and my drag daughter produced my audition tape and kept me thinking positive about getting cast. It was an awesome support system. I needed that.

Samara: Who has been your favorite RDR contestant so far?
Carmen: I don’t just have one favorite! That’s a hard one. I would have to say Nina Flowers. Her style is so unique and her creativeness is unmatched. I’m amazed at her makeup artistry and the whole character she has created. Oh, and she’s the nicest and most humble person I’ve met!

Samara: And what advice have you gotten from previous contestants?
Carmen: The best advice was NOT to read what people post on Facebook and Twitter. Do not give in to all the negativity that can come from people’s judgment of who you are. Just be yourself, and if they don’t like it, fuck ’em!

Samara: So, are you ready for fame & fortune?
Carmen: I’m so ready haha! Just like Rihanna, I need it all. The money, the fame, the cars, the clothes! I really want the fortune more than anything though. I want to start a family, and honey, that’s gonna cost a couple dollars!

Samara: What are you bringing to the table for season 3?
Carmen: I can say this season, I’m keeping it real! I’m doing what I enjoy and expressing my drag and my art the way I want to. I love my body and I’m not afraid to show it. I want to bring the fishy realness with some Latina heat this season!

Samara: Can you give us a heads up as to who’s the nice one and who’s the bitch on season 3?
Carmen: Sure! I’m the nicest and purrrrtiest one and all the others are bitches! Ha!

Samara: Would you ever date someone that does drag?
Carmen: I would NEVER date someone that does drag. I can’t. I tried it one time for like a week and gagged! Too much drama, competition, and shadiness! For me, when my man comes home to me, or visa-versa, all of that BS gets left at the door. It’s about family, love, and happiness when we’re together. I’m the only woman allowed in this relationship. Yo quiero un macho, honey!

Samara: What are your plans for the future?
Carmen: I have so many plans and so many ideas. Most important to me is getting more involved in gay marriage rights, shedding some light on the tough issues gay people face when wanting to have a family, and also becoming an advocate for not only gay and lesbian people, but also for the transgender community who mostly get lost in priorities.