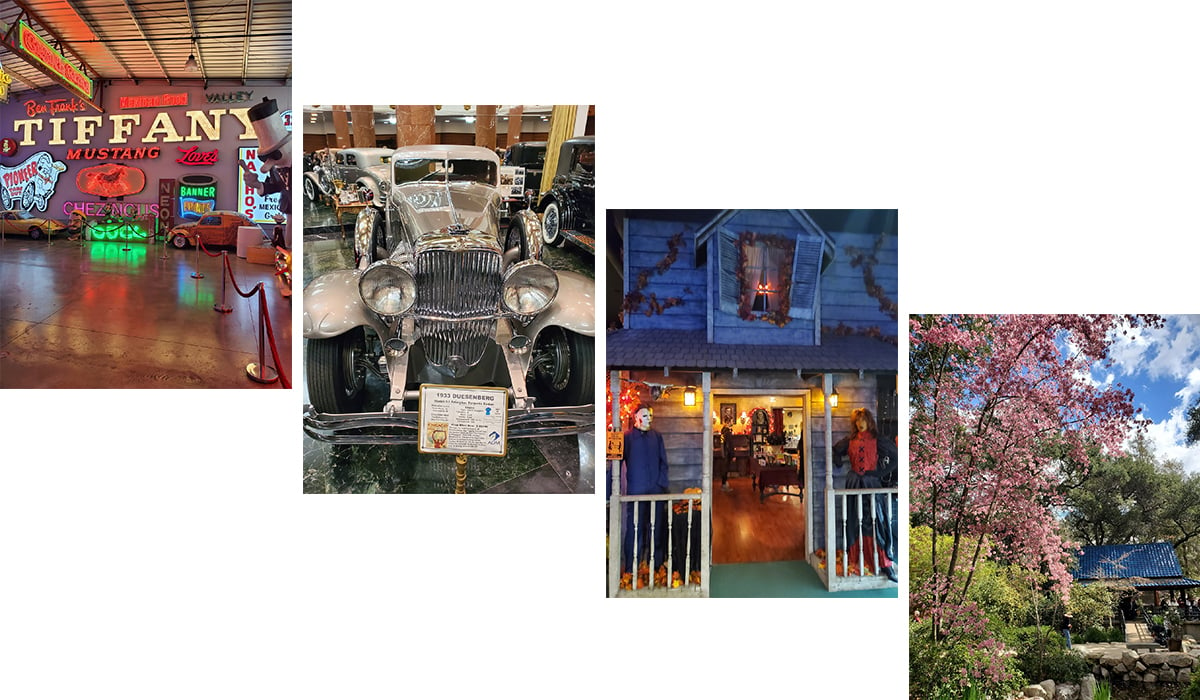 The San Fernando Valley, stretching from Agoura in the west to Glendale in the east and Sherman Oaks on Ventura Boulevard to San Fernando at the top, don’t get no respect from those south of the Hollywood Hills. L.A. snobs think it’s only claims to culture can be found at Universal Studios and shopping malls. Yet our two-day expedition uncovered a lot of creative fun, education, and inspiration to be had.

The Valley Relics Museum
https://valleyrelicsmuseum.org/ is in a Chatsworth industrial mall next to the Van Nuys Airport in Hangar C 3 and 4. Those who grew up in the Valley, current residents, and curious outsiders make the pilgrimage to be reminded of its colorful history. Outside was parked a Pontiac Bonneville owned by Nudie Cohen, the legendary clothing designer of Studio City, decorated with cowboy paraphernalia, including rifles. He was responsible for the “Rhinestone Cowboy” craze and the museum displays the gold lame suit he created for Elvis.

Lovingly curated by Tommy Gelinas, the exhibits feature Valley-based stars of cowboy movies and TV, like Roy Rogers and James Arness (“Gunsmoke”). On the horror side, the Boris Karloff section includes the screenplay of “The Brain of Frankenstein.” And you can see the VW bus from 1982’s “Fast Times at Ridgemont High” (filmed at high schools in Van Nuys and Canoga Park, with a cast of future stars). Local celebrities are often there signing autographs, and we met Diane Salinger, who appeared with Paul Reubens in three films, among her many credits.

There is a lot devoted to BMX bike racing, a photo of the Maharishi visiting the Taft High campus in 1968, locals reporting their experiences during World War II, functioning vintage arcade games, an entire room devoted to historic neon signs (see photo), and much more. You might even have something to contribute to the collection.

The Valley’s Public Art is surprisingly extensive and outstanding, such as Mural Mile running through Pacoima and Arleta along Van Nuys Blvd., much of it celebrating local history:

Not mentioned in that article is the Valley’s most famous mural, The Great Wall of Los Angeles by renowned Chicana artist and professor Judith Baca (see photo of one small part). It is over six blocks long, painted onto the concrete wall of the Tujunga Wash, one of the largest in the world, protected by a fence (which somehow has been respected by graffiti artists who have refrained from adding to it). The 13-foot-high mural was executed by her students over four summers in the 1970s. It depicts the history of California from the viewpoint of those who were largely left out of the official accounts, including women, Native Americans, LGBTQ+, religious minorities, Mexican Americans and Blacks. The images include the Japanese internment camps, Zoot Suit Riots, scenes from the Great Depression, Freedom Bus rides, gay rights activism, deportations of the undocumented, the birth of rock and rock, and so forth. It is located on Coldwater Canyon Ave. between Oxnard St. and Burbank Blvd. in Valley Glen next to the Valley College campus (where studying it is part of the curriculum, as well as at Grant High School).

Descanso Gardens
https://www.descansogardens.org/ is a 150-acre botanical oasis in La Canada Flintridge, despite being just 20 minutes from downtown L.A., near the intersection of the 210 and 2 freeways. The website lists the flowers in bloom each month and their range includes one of the largest collections of camellias in the Western Hemisphere, a five-acre rose garden, 400 lilacs, tulips, daffodils, irises, and wildflowers. A temple sits in the middle of the Japanese Garden (see photo), and you can walk through the Ancient Forest, which has flora that dinosaurs encountered. Signs explain the history, variety, and uses of each type of flower, plant, and tree. You can go at your own pace wherever you want or sign up for a guided tour.

Specialty Retailers abound in the Valley: two in Sherman Oaks are Freakbeat Records http://www.freakbeatrecords.com/, a venerable source of inexpensive recordings in every form, and Psychic Eye
https://www.facebook.com/psychiceye/ for all things paranormal. Another couple in Burbank are Halloween Town http://www.halloweentownstore.com/, for those who celebrate fright nights year-round (see photo), and Autobooks-Aerobooks https://www.autobooks-aerobooks.com/, which has everything from Cruise Night by Kristin Bedford (scenes from lowrider culture) to the three-volume Space Shuttle: Developing an Icon.

Few Angelenos have even heard of a museum that has made Top 10 lists for visitors: The Nethercutt Collection https://www.nethercuttcollection.org/ in Sylmar. We were skeptical as we drove through one of the less scenic parts of the Valley to see a placed being touted for its vintage cars (the Petersen Automotive Museum isn’t enough?), organs (does anyone still play them?), and gramaphones (we weren’t even exactly sure what they were). And yet something most have provoked those rave reviews about what had been collected thanks to the fortune of the Merle Norman cosmetics empire We reluctantly signed up for a two hour guided tour, worried that if we were bored we would have no escape. As it turned out, the Nethercut really is a world-class museum devoted to preserving “functional art” masterpieces.

We started out back to the future, admiring steam and electric cars from the late 19th and early 20th centuries (every vehicle is taken out on the roads at least once a year, some on freeways). Visitors see the evolution of things we take for granted, like gear shifts (first put on a steering wheel in 1904) and foot pedals (a 1913 Mercedes had five). In the background, player pianos and music boxes entertained with glorious sound quality (one Baldwin upstairs automatically played the paper roll recording of Gershwin’s “Rhapsody in Blue” as the composer performed it live). There are all kinds of other surprising items, from 18th century robotic dolls to a working steam locomotive outdoors.

In the main hall, the automobiles have been restored to their original brilliant colors and the centerpiece (see photo) is a 1933 Duesenberg Torpedo Sedan, plated with nickel that shines like silver (“it’s a doozy,” meaning awesome, derives from the “duesy”). It won the Best in Show at the Pebble Beach Concours 1980, the Olympics of classic cars, and is insured for $14 million.

The final part of the tour took place in a hall devoted to automated musical instruments, including player violins and massive orchestrions (used to provide music for dance halls or silent movies without having to hire an orchestra). For the finale, our guide played a Wurlizter organ that has 5,000 pipes. Our jaws dropped, eyes bulged, and ears were titillated for the entire time we were there.

There are plenty of other things to occupy several weekends, including tours of the working Warner Brothers Studio in Burbank, visits to the historic Mission San Fernando, seeing the planes close-up at the Burbank Aviation Museum, and listening to jazz at the Baked Potato in Studio City.