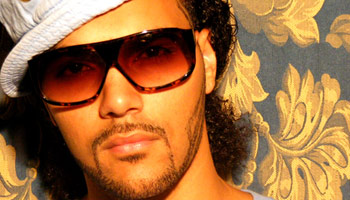 Moisés Morales also known as Papi Shank in the music business is a quadruple threat. This Puerto Rican, Dominican, Cubano doesn’t only have the best of all Latin worlds but is a singer/rapper/model/producer. To say he is a talent would be an understatement. Not only is he one of the hottest looking men on the internet but he is about to break through in the world of music with his first solo CD coming out this spring. His music is a blend of his origins and of many of today hottest genres with hip-hop, R&B, reggeaton, and even alternative rock, amongst others, all coming from one bad boy of music. Papi Shank is the bomb that’s about to go off. If his pictures get your attention then log on to his website to get a taste of what he does best and also to download your hot images of him and his music. Papi Shank es un macho con mucho latento.

Samara: First off tell us about your heritage. Because you’re mixed right?
Papi: Yeah, I’m Puerto Rican, Dominican, and Cuban.

Samara: Were you a school kind of guy growing up?
Papi: I love school. School is great. I liked it a lot. I always went to school.

Samara: How was it that you got into music?
Papi: I always loved it since I was a kid. I always loved to sing along with the songs but it wasn’t until I was in high school that I started doing it more like actually trying to write verses. I just started playing around with some friends in the cafeteria and then it grew from there.

Samara: You’re also a model and was in a contest recently. Can you tell us about that?
Papi: Oh that was an online competition. I don’t know the outcome yet. The winner will be posted on the 31st of January so we’ll find out what happened then. So you know you just had to post a picture of yourself and you’ll be voted upon and the top 200 will be reviewed by a panel of judges and they’ll decide which one to choose, so we’ll see what happens. Either way whether I win or not it’s just good for more promotion. Another site and people see my picture. You know cross-marketing.

Samara: How do you like to describe your music?
Papi: My music. I may do hip-hop and R&B but I try to… my music spans across all genres. When I finish my solo album, which I’m working on at the moment, it’s gonna have a lot of diferent elements in it. You know hip-hop, R&B, pop, reggae, reggaeton, maybe even some salsa and merengue. I don’t know. Some alternative rock, Latin, even freestyle. I grew up with a lot of freestyle music. In my singing you can hear that, on melodies. So trying to you know infuse the genres.

Samara: Is it mainly English or Spanish too?
Papi: My music at the moment is like 95% English. Though I’m Latin and I understand it 99% of it, you know speaking it I stumble during conversations with people back and forth. Spanish has become more Spanglish but I’m actually about to work on that. When I was on tour in Spain last year, I was out there for two months, my Spanish got way better, I was having full conversations. But as soon as I came back to the States I started talking English again so it’s a little rusty again. But in my music I got one reggeaton track Tiempo and sometimes I put a few Spanish words in my rhymes. I can understand it so I can sit down and write it just takes me a minute to write it. I plan to have more Spanish in my music.

Samara: Tell us about your new single and CD?
Papi: Well in 2008 I put out a collaboration album, sort of a mixtape album called Log on Vol. 1 and basically that CD consisted of 20 tracks with 16 songs of collaborated tracks of artists that I be working with you know artists that I did a feature for them on their albums also a mix tape.
So I decided to put out a CD of original music because prior to that it was all beats of industry tracks and I just took a song and remixed it. And that’s how I started doing it. But I decided to put out original music.
The song that I just put out now Wut Ya’ll Want was my single track on that album because like I said it was a collaborative album so every single track on that album that was the only song of just me on it. So I figured to end last year and to begin this new year I started with my solo song for that album.

Samara: When does the new CD come out?
Papi: I don’t know, I don’t know. Up until this point I’ve never tried to shop any labels. I’ve never tried to get a deal or anything. I don’t even have management or agent. I handle everything on my own. So this year I’m trying to put together a solo album and try to shop it. First I was trying to do my street credibility and my industry buzz before I step to any label. Cause now a days labels are not trying to do aritst development. So I’m trying to come to them already developed. When I put together this album I’m trying to drop the first single from the album March 20th, the first day of spring.

Samara: You also have a calendar coming out right?
Papi: Well I’ve never done a calendar. I’m planning to do my first calendar for 2010. I just came up with that idea. I mean it crossed my mind two times in the past but I always just brushed it off. But I’m trying to take the modeling thing a little more serious and so at this moment I decided I’m gonna try to put together a calendar for 2010. So I start working on that sometime around March, April and try to get it together for 2010. That will be my first calendar.

Samara: How is it that you feature all these artists like Biggie on your videos?
Papi: That actually… if you know about me before I put out this collaboration album or mixes that I’m telling you about that I started with was called illegal remixes. So basically I take an industry track you know for instance a song like the one that you’re talking bout with 50 Cent She Wants It song the Ayo Technology track. I take a song like that and I take it and remix it. Cut parts of the song out and I add myself to it. And that’s how I was putting out these mix tapes. So that way my buzz generates. You already wanna hear the song, you wanna listen to the song and then you go, “oh what’s this?” “is this another version of the song?” And then I believe I make the song better when I add myself to it so I don’t think anybodys complaining about that. So that’s how I began my buzz. And then I saw other artists started doing it started taking it to another level of remix music video. So again there is no comission. I just took the music video, I shot a music video at home and I had it spliced together so it seems like I’m in the video with them but it’s all part of the illegal remix tape persona.

Samara: What female artist would you like to do a duet with?
Papi: I’d be happy to work with anyone. I like to work with artists. If I had to pick one Mariah Carey is my favorite R&B vocalist female. So if I could work with her that would be phenomenal.

Samara: So is Papi Shank single, taken, or what?
Papi: Well I’m married to the game is what I like to say to everybody cause you know its all about staying faithful to the music business and the entertainment world. So that’s the answer I’d like to give you. (laughs) I am involved with someone though.

Samara: Anything else you want to say to your fans?
Papi: “To infinity nine the industry is mine,” that’s my new slogan for the year. But you know if anybody is trying to do it you gotta do it for yourself. Everybody needs a hand. You can’t do everything yourself. Do as much as you can for yourself and then someone else can help you out. So you gotta do it for yourself if you wanna be in the entertainment business. Educate yourself. Don’t think cause you can rap or you can sing its gonna happen. Appreciate the support, the love, keep it coming. I’m gonna try to keep giving everybody what they want and more. I’m about to put out this album. I’m also gonna put out my next mixtape. Log On Vol. 2, which is gonna be a mixtape downloadable for free for everyone. That’s what I’m trying to do for everybody.

Samara: Thank you so much for this interview Papi.
Papi: Thank you for your time, I appreciate your support. Bye!