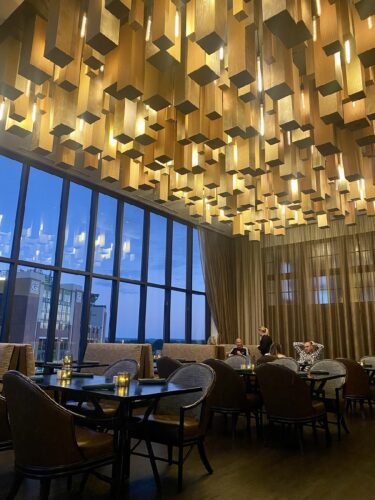 Ever since I was young, I have wanted to visit Green Bay. I didn’t know much about the city itself aside from the fact that it is home to arguably the most iconic stadium in the world. I remember watching football with my dad and listening to the broadcasters comment on how it felt to be at Lambeau Field to watch the Green Bay Packers play. What I didn’t realize was the reason why the stadium became so famous. I found that out during my recent visit to Green Bay.

Green Bay may not be the first city that comes to mind when you are looking for LGBTQ-friendly destinations to escape to, but if you are a football fan, there is no better place to visit. The city comes alive on game day. On the Sunday I was in town, it seemed like everyone in the city was either watching the Packers game at a bar, attending a tailgate outside the stadium or had a seat at Lambeau. If you are lucky enough to score tickets, you are in for a treat. The building is a monument to football dating back to the formation of the Green Bay Packers, the third team to join the NFL behind the Arizona Cardinals (then St. Louis Cardinals) and Chicago Bears, one of the team’s fiercest rivals.

Surrounding the stadium are statues of Curly Lambeau, the team’s co-founder, coach Vince Lombardi and other Green Bay icons who made the game what it is today. Ironically, based on today’s criteria, a city the size of Green Bay would never be awarded an NFL franchise, but the team became the most winning team in NFL history with thirteen league championships since its formation in 1919.

If you have a chance to tour Lambeau Field the day prior, I highly recommend doing so. You will get to visit parts of the venue you probably won’t have access to on game day as well as the opportunity to get on the field and stare in awe of the size of the structure, which holds over 81,000 fans.

After the game, head to one of Green Bay’s LGBTQ bars including The Roundabout, XS and Napalese, the Wisconsin’s second oldest gay bar. A beautiful mural was also created on the side of Napalese’s wall that is worth seeing during the daylight as well.

Green Bay is home to a ton of mom-and-pop cafes and coffee shops. One of my favorites was The Attic, which also doubles as an independent bookstore. Grab a latte and head over to The Automobile Gallery, a collection of classic and unique cars founded by William “Red” Lewis that is housed in an old Cadillac dealership. The Automobile Gallery’s mission is to offer a unique atmosphere for public and private events which supports the education and inspiration of “The Automobile is the Art.” You will get up close and personal with everything from sporty Mercedes’, Porsches, and Corvettes to a classic Rolls Royce and Hippie-inspired van. It truly is a car lover’s dream.

Spend the rest of the afternoon strolling around downtown Green Bay or the De Pere Riverwalk before heading to dinner at Taverne in the Sky which is located on the top floor of the Lodge Kohler. Lodge Kohler is part of the new Titletown development which is just across the street from Lambeau Field. Taverne in the Sky is a modern restaurant with panoramic views of the city. The menu features an assortment of entrees including a delicious Ancho Rubbed Wood-Fired Salmon which comes with chorizo corn cakes and grilled asparagus served with ginger-mango salsa and a poblano cream sauce. For dessert, try the Sticky Toffee Carrot Cake. I promise you will be in love, even if you’ll need to hit the gym the next morning.

Or if you prefer, you can skip the gym and treat yourself at The Pancake Place. I went there before the game on Sunday morning, and it was filled with Packer fans as well as a few tables of New England Patriot fans, who the hostess picked on from time to time. It was all in good fun and everyone was in high spirits. It was one of the most entertaining breakfast experiences I’ve had in a long time.

As far as lodging is concerned, there aren’t a ton of boutique properties in Green Bay. Most hotels are chains, with the exception of Tundra Lodge, a local favorite. It definitely is a bit quirky but a viable alternative to the chains if you are looking for something with more of a Green Bay feel. And by quirky, I mean it has an indoor water park. You don’t see that very often.

What I enjoyed most about the city were the people. Everyone was extremely friendly and welcoming, which helped make my trip to Green Bay really special. Go Pack Go.
Enjoy the Journey!