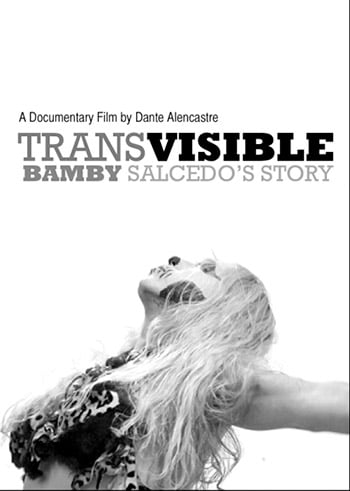 Outfest will be screening the world premiere of “TransVisible: Bamby Salcedo’s Story,” a documentary film on the life of renowned Los Angeles-based Trans Latina Activist and leader, Bamby Salcedo. Turning personal challenges and barriers into the very basis of her activism, Bamby gives voice and visibility to the multiple, overlapping communities her life has touched.  She has become an effective advocate and role model not only for the Transgender community but also the Latina, immigrant, HIV+, youth, and LGBT communities.

Her gripping and intimate first-person storytelling, supported by those of family, friends and colleagues, leads us through the challenges of her early life towards her unlikely and transcendent rise to being the powerful activist that she is today.

Passing through addiction, prison, prejudice, and loss, her resilient and generous spirit carries her from merely surviving these challenges to becoming a thriving and beloved advocate.

From her post at the helm of the nations largest transgender youth program at Childrens Hospital Los Angeles, the story of her wide-ranging and multi-focused activism takes us in several directions.  We see her creation of the life-changing Angels of Change program for trans youth. We follow her empowering grassroots advocacy with her nation-wide Translatina Coalition and we hear her testimony supporting LGBT imigration reform at the California State legislature and beyond.

Her unassuming warmth and and down-to-earth personal style is a constant throughout and coexists with the seriousness of her determined committment as an activist. What emerges in the film is a portrait of someone who so fully and completely participates in her life that it is infectious and inspirational.  Someone for whom people happily say, ‘I know Bamby’.  That she is fortunate and grateful to be alive is expressed in her life, in her work, and in her signature dance moves that are always ready to spontaneously and joyfully erupt.

As a film about a transgender subject, Transvisible: Bamby Salcedo’s Story is unusual for its in-depth focus on the personal and professional life of a transgender person, activist and leader. The film reflects her life as a unique, integral and fully dimensional human being.  It includes the issue of gender transitioning only in the context of a life with a variety of her other particular concerns, issues and accomplishments.
The film is also unusual in that it portrays an exceptional trans activist in mid-career, in action, in her full power, poised to raise to even greater heights in the years ahead.  The visibility of her story at this point in her life will not only widen the circle of awareness and support for her current work, but will speed the delivery of her hopeful, possibly life-saving example to the many unknown others, in the midst of their own life and death struggles right now.

Dante Alencastre is a Peruvian-born, Los Angeles-based documentary filmaker and activist.  His previous award-winning film, En El Fuego ( In The Fire ) ( 2007) documented the plight of transgender Peruvians.  Five years later, he produced El Fuego Dentro ( The Fire Inside ) ( 2012) which follows up with the personal and political transformation of this group of extraordinary grassroots transgender activists.

Executive Producer Roland Palencia is a recognized LGBT Latino activist and leader, based in Los Angeles, with decades of service to the community. He is the co-founder of Gay and Lesbian Latinos Unidos, Viva!, an LGBT Latino arts organization, the former Vice President and Chief of Operations at AIDS Healthcare Foundation, and former Executive Director at Equality California and Clinica Msrg. Oscar A. Romero.

=====
en un cuadrito
Screening on Sunday, July 14, 2013 at 6:30 p.m. at the Redcat in Downtown LA. To purchase tickets, please visit www.outfest.org and search for keyword: TransVisible.