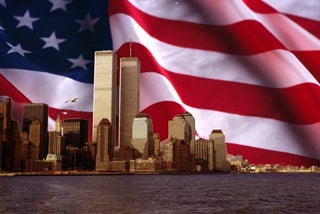 I remember the exact moment I fell so deeply in love with my husband that I literally cried like a tiny child. We had been married for ten years, it was just after 911.

I was in our bedroom being domestic, making the bed, sorting clothes, swearing under my breath at my husband for leaving change in his pockets, for not turning his clothes right side out.

The TV was on; they were playing back messages from partners who would never again speak to their mates. Some were going to die and saying their last goodbyes, some were going to suffer one of life’s greatest losses.

I looked at my husband’s version of clothes ready to be washed, a mess of inside outs and filled pockets, and I cried, sobbed, bawled. I knew then I was the luckiest woman alive.

We had been married for ten years. It had not been an easy ten years. Drugs had been involved, near poverty, ill health, lost businesses, yet we had somehow made it through and were starting our lives over.

We had just moved from San Francisco to Los Angeles and woke up a few mornings later to the enormous loss of 911, dwarfing our small issues to nothing. Sitting on the bed, listening to those love-filled good-byes, I grabbed my husband’s clothes and held the smelly, inside out things with a desperate love. I cried into his t-shirt blessing God that I still had him and had been given this second chance to love and appreciate him, eccentricities and all.

Love is truly an amazing thing, the most powerful energy in the Universe, stronger than any hate. Love is necessary to our very existence, like oxygen, we cannot live without it. Love need not be romantic, it need not be the end all be all of our lives, but it must be present, it must be felt, it must be expressed.

It makes me wonder how anyone can deny that love exists, in whatever form it takes, whether between mother and daughter, husband and wife, sister and brother; between friends whose worlds would be that much smaller without the other, or between male and female or male and male, female and female, love is the single most powerful force that exists.

Prejudice and hate are the weakest energy known to man. They only appear strong when they blow up buildings and lives, when they attempt to deny that love exists. However, it is appearance only with prejudice and hate, they have no real power. We cannot deny that lives were lost on 911, but we can deny the perpetrators of this horror their goal of winning over us, of destroying us.

Most of us are forever changed by 911. Some suffered losses not quite survivable, but for those of us who sat 3000 miles away from Ground Zero and watched and listened in horror as those we now knew existed lost one another, the world would also change. How the world changes for us is up to us, not to those who attempt/who succeed in harming us.

I became aware of my love for my husband, consciously aware. I swore to those burning buildings, to those tapes of love and farewells, to all that we hold sacred, I swore my love and passion to my husband.

I can no longer remember what they said in those tapes of last time goodbyes. I can, however, hear their voices. I can hear a love far more powerful than anything that was happening to them at that moment.

Time stopped for them, and for me, in those moments of loss, in those moments of true, raw, brutal, honest, unequivocal, undefeated, impassioned love. In its place rose a love that is now conscious and far more forgiving for those of us with mates who slobber, who forget to take the dog out, who leave dirty dishes in the sink and never remember to empty their pockets before putting their jeans in the laundry.

We honor those of 911 when we love instead of hate, when we embrace instead of pre-judge, when we choose to kiss instead of argue. Love is the most powerful, all healing force in the Universe. Honor 911, make love to your mate, hug your best friend, embrace your boss, forgive your mother, hang on tightly to your sister and express your love to your father.