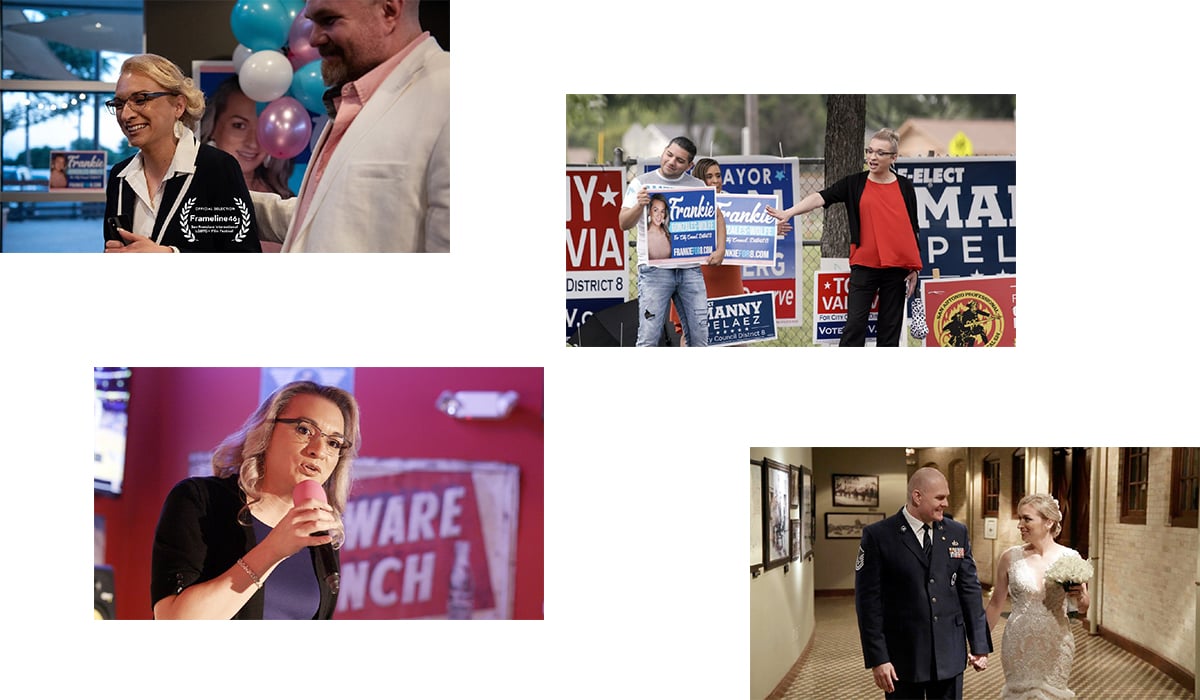 Filmed over the course of three years, director Ray Whitehouse gives us a compelling new documentary that follows Frankie Gonzales-Wolfe while she campaigns as the first trans woman for San Antonio’s 2019 city council race. A Run for More premiered at this year’s San Francisco’s Frameline 46 Film Festival and is on track to be a festival favorite.

As a political campaigner with more than fifty elections in her holster, Frankie is used to fighting other people’s causes, including Hilary Clinton’s run for president and Beto O’Rourke’s campaign in 2018. However, when she decides to run for city council in her hometown of the Alamo, she faces a different kind of challenge—and this time it’s personal.

In order to win, Frankie knows she has to be a representative for everyone, which is a devil’s tightrope in Texas. Frankie’s platform is to represent all the diverse communities that make up her district. “If a small town in Texas can do it, then anyone can do it,” exclaims a young campaign volunteer, referring to a trans woman running for office.

What’s fascinating about Whitehouse’s 80-minute cinema-vérité style documentary is not that Frankie encounters transphobia, that’s a given, but what is much more interesting is how Frankie is constantly rediscovering who she is and how she draws on so many good, as well as traumatic experiences that made her the strong individual that she is today. Her family supports her and volunteers on the campaign. It’s an inspirational grass roots approach with a small army of friends that go knocking on doors and make phone calls to solicit support.

One endorsement she has to get on her own, however, is from the trans community in Texas. She never embraced the statewide trans community, outside her circle of friends, and never reached out to those activists for assistance prior to her bid for city council.

In one particular awkward scene, an elder trans activist calls Frankie out for deliberately shunning her at a past event. You see the painful guilt register on Frankie’s face as the activist then begins to praise the young politician for having the courage to run and hence, be a “role model” for younger trans. Still, the activist claims, recalling their first meeting, “You spent the whole day avoiding me.” Through a tear, Frankie confesses, “I was broken.”

Indeed, Frankie went through a period of self-doubt. After being raped one night, her self-esteem is fractured, and she begins to question her own identity and contemplates suicide. The filmmaker does a commendable job of portraying the night she was attacked by three men in the parking lot of the gay bar where she had just performed. Instead of a graphic reenactment of the assault, Whitehouse just shows images of the parking lot, asphalt potholes, and darkened alleys as Frankie recounts her heartbreaking story. It’s a devastating experience all too familiar for trans women and men.

With therapy, family support, and marriage to a well-adjusted Air Force veteran, Frankie pulls herself together. The politician realizes that she and the trans community will never be safe unless she and others weave a safety net of laws that will help protect them and give trans people a voice at the political table. Between 2018 and 2022, U.S. lawmakers across the country have proposed more than 700 anti-LGBTQ+ bills.

In her own community, it’s an uphill battle as Frankie’s political placards are ripped down all over the city. Her husband, Jeff Wolfe, fears for his wife’s safety, but admits there’s very little he can do to protect her. The film documents how happily married she is to a loving, supportive husband and how he listens more than he gives advice.

A Run for More is a personal journey of self-discovery over the course of a historic campaign, and what Frankie learns about herself along the way is as eye-opening as the reactions she receives from the community she hopes to represent.

For screening updates and info on A Run for More, visit: https://www.arunformore.com/