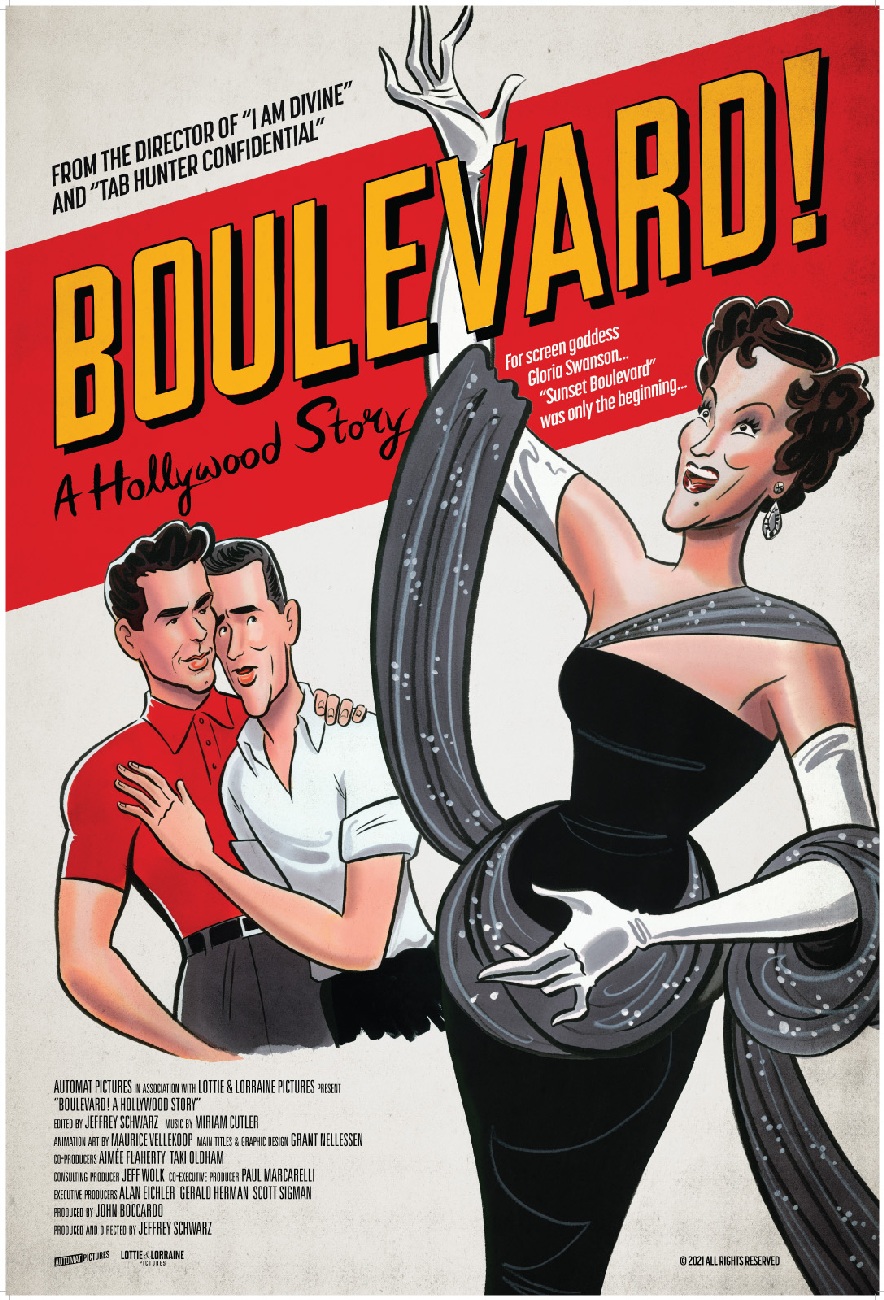 If you’re a fan of the 1950 movie Sunset Blvd, starring Gloria Swanson and William Holden, then you’re going to fall head over stilettos for Boulevard! A Hollywood Story, available now on iTunes and Apple TV. Those not familiar with the film noir masterpiece can still appreciate this poignant love story about a gay couple commissioned by silent film icon Gloria Swanson in 1957 to develop a musical adaptation of Sunset, 35 years before Sir Andrew Lloyd’s Broadway hit.

Adelante: I just want to say I’m a big fan of your films. I mean, you’re the queer Ken Burns of LGBTQ documentaries. How did you get your start in this genre?
Schwarz: I appreciate that. I love Ken Burns. I went to film school, and I saw The Life and Times of Harvey Milk, when I was in college. And that really blew my mind because it was connecting me to our history, which was now my history because I was coming out and wanted to learn everything I possibly could about people who sort of walked in my footsteps and see whose shoulders I was standing on.
And Harvey was certainly one of those people. And I got very interested in the work of Rob Epstein, who directed that film, and Jeffrey Freeman, his filmmaking partner. I then ended up being able to work with them when they were producing the Celluloid Closet. That was my first job, becoming an apprentice editor on that film and really getting to see how a documentary is made from the ground up.

Adelante: So why did you choose to make a documentary about Sunset?
Schwarz: It’s probably my favorite movie. I love the blending of fact and fiction. I love how cynical it is about Hollywood. It’s just very darkly funny. And I read a book called Close Up on Sunset Boulevard, and it’s about the making of the movie.

And there’s a chapter in there about this attempt to make a musical back in the fifties. But what really sparked my interest was her collaborators, which were actor Richard Stapley and Dixon Hughes, who are gay couple. And there wasn’t a ton of information in this chapter, but there were some references to friends of theirs. And one of them, I actually knew, Alan Eichler, and I called him and I asked him, ‘Is there a story here?’ And he said, “I’ve been waiting for somebody to ask me that question for 25 years.”

Originally, I was thinking it would be a scripted project, but then in uncovering all this incredible archival material and talking to people who were privy to these events, I realized that it could make a terrific doc. And I love uncovering queer stories from the pre-Stonewall days.

Adelante: What do you think is the fascination with Sunset Boulevard and gay audiences?
It comes down to the Norma Desmond character. She’s the original Baby Jane. The movies about women of a certain age who are at a point in their lives when the world doesn’t see them anymore. And they act out in these very strange ways, either the way they dress, the way they look or talk. They live in the sort of world of delusion. The Norma character is just so compelling because you hurt for her.
But at the same time, you, you relish in how she just doesn’t give a shit about what other people think. She’s living in her own world that she’s created. And for some reason, we see ourselves in these characters.

Adelante: And I think especially older gay men.
Schwarz: That’s really, for me, the core of this film, because one of the men who worked with Glory on writing this musical, Richard, was a very handsome, young movie heartthrob, who had a limited movie career, but he started to get older too. And the movie industry kind of passed him by, but he was really still holding onto that dream of being the matinee idol. He never let it go, so there’s so many parallels in the documentary between the themes of Sunset Boulevard and Richard himself. So that’s another thing that attracted me to it.

Adelante: have you ever thought of doing an actual feature film, a biopic on Divine or, or any other doc subjects?
Schwarz: I would love to adapt some of my docs into scripted films. I don’t know that I would be interested in directing them myself, but I definitely want to be producing them and help to adapt them to the screen.

Currently, I’m developing Boulevard as a scripted feature or series. We’ll see what happens there. For me, I don’t really see a difference between features and docs. The story structure’s the same for me. I’m attracted to docs that tell a very kind of linear story the way feature films do.

Adelante: What advice would you give to, uh, young filmmakers who, who want to make LGBTQ documentaries?
Schwarz: Do it yourself. It might be cliché advice, but it is the best advice I could give. Don’t wait for anybody to give you permission to do it. Figure out a way to do it yourself. Find a story that is compelling to you. For young filmmakers, especially now, the tools to make a movie have never been more accessible. You can shoot and edit and do so much yourself. But for me, it’s finding that compelling story.

Adelante: What has been your greatest reward in making this film or the films you’ve directed?
Schwarz: The real reward is that these films help to secure the legacy of people who may or may not be forgotten over time. People that we assume will never be forgotten, they always are forgotten. It’s just the way of the world. This film will extend the legacy of some of these folks. I mean, Richard and Dixon are people that no one’s ever heard of before, but they’re being talked about now. And that makes me feel great.