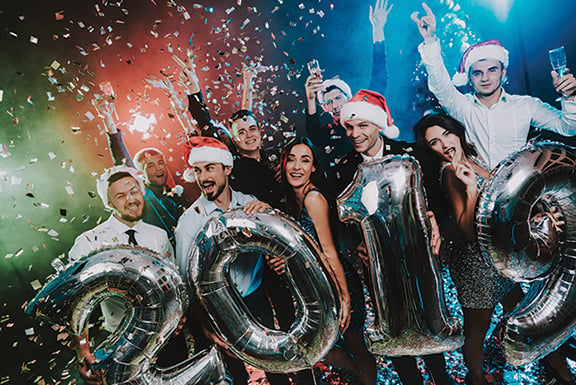 The holiday season is always full of stress, and by the time the New Year arrives, we start to frantically panic because we have too many things we want to accomplish and too many others we didn’t accomplish. And what do we do? We make a list of NEW YEAR resolutions. Resolutions we are going to start but most of the time we are not going to finish.

Two years ago, sí, lo sé, that’s long ago, I decided to have one single New Year’s resolution. It was written like this: “This year is the year of not giving a fuck!” At first, friends laugh at my “funny” resolution. Others thought my sarcasm had reached an obscene level (because it hadn’t before?), and others actually took my declaration seriously.

I was serious; I declared such resolution over, and over, and over. And when my birthday arrived, I announced it once again to make sure people understood I was determined to follow it. And followed it I did. Everyday I reminded myself it was the year of not giving a fuck! And you know what? It worked! Soon, I was expressing how I didn’t care about everyone’s problems, how the drama at work didn’t face me, how, if things did not turn out as planned, it was okay. The year ended and I found myself being happier so for the year 2018, I declared that my only New Year’s resolution was to continue my 2017-year resolution, “Continue to give no fucks!” Life became better, and easier, and much more peaceful.

But many people didn’t like my new attitude. They told me I was being selfish and I was being un culero. So, I started to doubt my new approach to life. And just when I was about to give up, to change my ways, to listen to others, a friend, sent me a message via a Facebook Meme:

“Not giving a fuck means taking care of yourself first—like affixing your own oxygen mask before helping others.”

“Not giving a fuck means allowing yourself to say no: I don’t want to. I don’t have time. I can’t afford it.”

“Not giving a fuck—crucially—means releasing yourself from the worry, anxiety, fear, and guilt associated with saying no—like allowing you to stop spending time you don’t have with people you don’t like doing things you don’t want to do.”

“Not giving a fuck means reducing mental clutter—like eliminating annoying people and things from your life, freeing up space to truly enjoy all of the things you do give a fuck about.”

And there it was! The proof I was waiting for. No, it wasn’t scientific research, or a Bible passage, or an official statement by a president, but a Facebook meme sent to me by a friend who lives across the nation and, who unbeknown to her, did not know I was doubting my “I don’t give a fuck” attitude. Right after I read it, I smiled, and smiled, and continue smiling for a while.

This meme, which to many would be just a funny thing to read on Facebook was, to me, a validation of a decision I had taken two years before, a decision that had turned my life for the better and that some friends had decided to attack.

I sat down and made a list of those people who had called me selfish and un culero and then I asked myself, why are they being like this? Why aren’t they happy with how my life has turned out?  Why? Why? Why?

I thought of the many moments we spent together and the many times I had come to their rescue, to be with them, to help them out, and also of the many times they have done that for me… and, lo and behold, the scale was not even. I knew then that my “I don’t give a fuck” attitude was in fact, a good decision, because I was taken care of myself first and then taking care of everyone else. Such resolution didn’t serve many but it served me and that was the problem. No, not a problem to me but a problem to those who did not benefit from my resolution… and that is why they attacked me and made me doubted myself.

Luckily, a Facebook meme arrived on time, with the necessary words to give the clarity, strength, and validation I needed. And so, for this New Year, my resolution continues to be the same for the last two years. And on this first month of the year 2019, I offer you my resolution. Make 2019 the year of giving no fucks! Use it, practice it, and live it. And may this year be the start of a life where you don’t give a fuck…. So you can enjoy life to the fullest! Happy 2019 Queeridos!!!