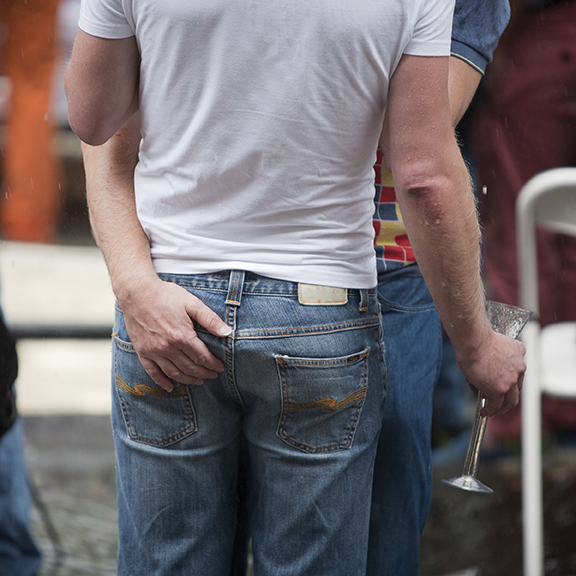 A VIEW FROM THE BRIDGE: Notes of an Antiquate Queen

Did you miss me, Queeridos?

Of course you didn’t, even though I have been suffering and thinking about all you every single moment of my tragic and dramatic life. I’m not going to hold that against you because, as traumatic and damaging your indifference is, I still will think of you. All because I am a hot, sexy, irresistible, and complete mess, my queerido. Because. Of. You.

But never mind that! Today I want to speak about consent. Because, unless you live somewhere where there is absolutely no communication, I’m sure you are well aware about the circus going on in the lower depths, known as Washington, D.C. And no, I don’t want to talk about what is going on in the ninth circle of hell. I leave that Facebook and Twitter. I wan to talk to you about consent within our own joto community.

When I was a young and cute college boy, and believe it or not, there was a time when I was young and cute, I experienced all types of sexual harassment from a lot of the gay people that were at the clubs I attended. And no, I’m not saying I’m a victim and I’m also not innocent either, mainly because I practiced the same activities everyone else did. Anyway, I was away in college and I was at a club, dancing the night away and releasing all the stress from being a graduate student. At some point I decided to go to the restroom and on my way there, a guy simply grabbed my crotch as I passed by. Of course I ignored it and kept on walking, but as I strolled away, I heard him tell his friend, “He’s cute; but there’s nothing there.”

I am not going to talk about whether he was right or wrong about “nothing being there,” because that statement is subjected to many factors. But what I will say is that for just a few seconds, as I headed to the bathroom, I felt a little ashamed of being who I was. Why? Because the guy’s purpose was not to find out whom I was but rather to figure out what I was packing under my pants, in other words, I was a sexual object. I quickly shook away the uncomfortable feeling, saying, “Don’t mind him. Don’t allow him to ruin your night.” And so, I continued my way to the restroom and afterwards I stepped back onto the dance floor and made sure I was sexy and tantalizing with every single body move. And let me tell you, being a trained dancers and having a natural rhythm come on handy even today.

Is there a point to my story? Of course there is, queeridos. Everything I talk about has a point, even if it takes me two pages to get to it. But I digress, as I continued life in the gay circuit, I started doing the same thing to other guys, grabbing them without permission, brushing my body against them as they passed by, vocalizing the things I wanted to do to them if they only gave me the chance. And why did I do that? Because that is what our gay culture has been doing since I remember. But after all these years and after all the events that have been occurring since the #metoo movement began, I have come to the conclusion that such behavior is not something to be proud of and something that we need to be aware of so we can change it.

But, do we need to change it? Yes, we do. Even though we are gay people and our gay community has always “accepted” such practices. As an underrepresented group we have come a long way to understand who we are and how our behaviors and actions have damages us in more ways than one. At the same time, we have also thrived as a community. So grabbing, verbalizing, and touching other gay men at a club because that’s who we are is not really an excuse or a permit to become perpetrators of sexual harassment. We may have acted that way in the past but there is nothing—NOTHING—that should give us permission to behave in such ways today. As jotos, we have achieved a lot in the last ten years, we have equal rights and legalize marriage. We are becoming part of the fabric of society, and so, our behaviors need to change, especially the non-consensual practices of harassing other gay men because they are gay and because we are in a gay club. Really, being in a club surrounded by other gay men doesn’t give anyone the right to behave and/or act upon such harassing practices. The only place where that is permitted is sex clubs. And even in such places, there are still rules to follow. We must evolve, queeridos! It is best for us all.