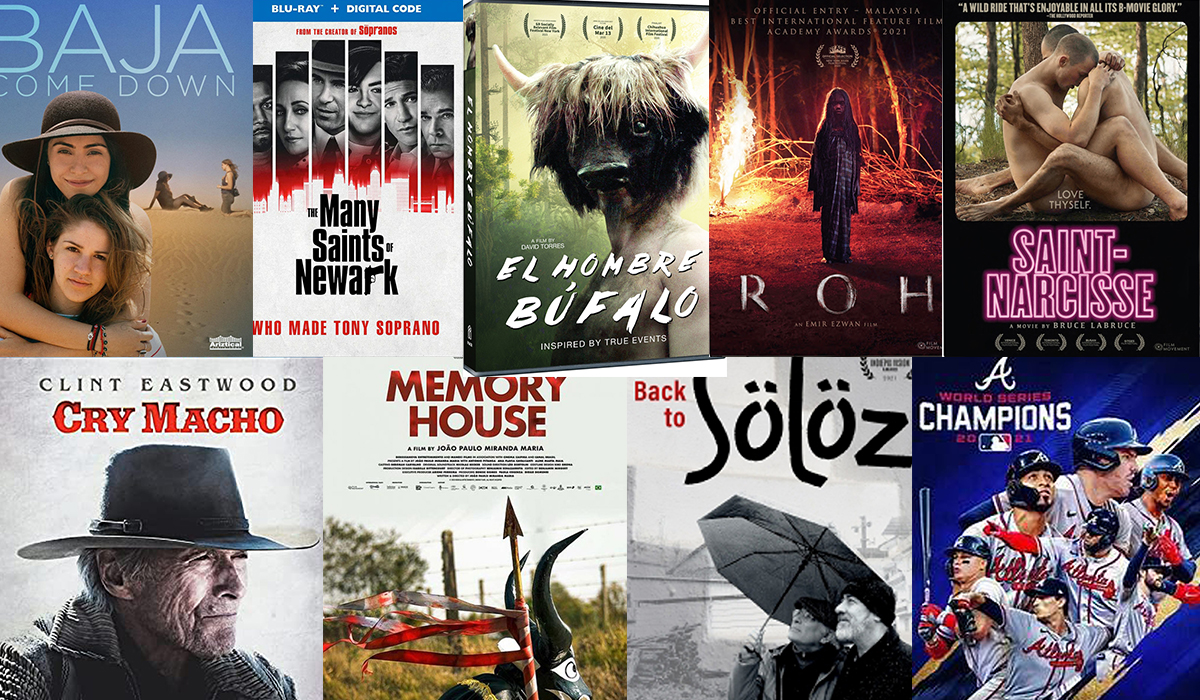 BAJA COME DOWN
Ariztical Entertainment
Available on DVD/Digital January 25
Charlie (Michelle Ortiz) and Hannah (Caitlin Michael Riley) can’t say it out loud, but the two women both know their relationship is coming to an end. As a last-ditch effort, they head south, down the dusty coast of Baja California, Mexico with their ragdoll cat Lou. The two reconnect and make love but the connection doesn’t last long before the tension between them rises to the surface. And when a crisis at work calls for Charlie to go back to L.A., the question of whether they will return separately or together must be faced.

THE MANY SAINTS OF NEWARK
Warner Bros. Home Entertainment
Available now on 4k, Blu-ray and DVD
Young Tony Soprano is growing up in one of the most tumultuous eras in Newark’s history, becoming a man just as reval gangsters start to rise up and challenge the all-powerful DiMeo crime family. Caught up in the changing times is the uncle he idolizes, Dickie Moltisanti, whos influence over this nephew will help shape the impressionable teenager into the all-powerful mob boss Tony Soprano.

MEMORY HOUSE
Film Movement
Available on DVD/Digital Now
In this audacious debut feature, Joao Paulo Miranda Maria conjures a surreal image of the racial and social rifts in modern day Brazil. Cristovan, and indigenous black man from the rural North, movies to an industrialized Southern town populated by the descendants of Austrian espats to work in a milk factory. Immediately confronted with their virulent racism, he becomes more and more estranged from the white world. Upon discovering an abandoned house filled with objects reminding him of his origins, Critovam begins a spiritual and physical metamorphosis.

ROH
Film Movement
Available now on DVD/Digital
Cut off from civilization, a single mother puts her children on high alert when they bring home a strange young girl caked in clay. She tells of spirits and spirit hunters and after spending the night she delivers an ominous prophecy: the family will all soon die. As strangers begin to show up on her doorstep, and terrible events crop up around them, she quickly finds another reason to fear the forest. This eerily atmospheric folk horror tale marks the stunning directorial debut of seasoned visual effects artist, Emir Ezwan. From the ominous lighting, off-kilter tone, isolated locations and strange goings on, ROH is a visceral, spine-tingling revelation.

SAINT NARCISSE
Film Movement
Available Now on DVD/Digital
Dominic, a young man with a fetish… for himself. Nothing turns him on more than his reflection, with much of his time spent taking Polaroid selfies. When his loving grandmother dies, he discovers a deep family secret: his lesbian mother didn’t die in childbirth and he has a twin brother, Daniel, raised in a remote monastery by a depraved priest, held captive against his will! The power of destiny brings together the two beautiful, identical brothers, who, after being reunited with their mother Beatrice, are soon embroiled in a blasphemous web of sex, revenge and redemption.

CRY MACHO
Warner Bros. Home Entertainment
Available Now on 4k, Blu-ray and DVD
In 1979, Mike Milo, a one-time rodeo star and washed-up horse breeder who takes a job from an ex-boss to bring the man’s young son home, away from his alcoholic mother. Crossing rural Mexico on their way back to Texas, the unlikely pair face and unexpectedly challenging journey, during which the world-weary horseman may find his own sense of redemption through teaching the boy what it means to be a good man.

EL HOMBRE BÚFALO
IndiePix Films
Available on DVD/Digital now
El Hombre Búfalo follows Eric, a young journalist in Mexico City who stops writing after he receives death threats. Obsessed with an elderly homeless man who has dementia and a mythical being who takes care of abandoned children, he decides to write again, even if it costs him his life.

BACK TO SÖLÖZ
IndiePix Films
Available Now on DVD/Digital
Turkey, a village, today. A French filmmaker of Armenian origin returns to his roots. Four times in three decades, the director and actor Serge Avédikian returned to Sölöz, his grandparents’ village located 170 km south of Istanbul. Throughout his successive returns from 1987 to 2019, he has drawn from this experience a powerful film on the themes of identity, historical truth and reconciliation.

WORLD SERIES 2021
Shout! Factory
Available on DVD/Blu-ray now
All of the excitement, drama and life-changing moments from the 2021 World Series® are here in the official 2021 World Series release from Shout! Factory and Major League Baseball. Only one team earns the right to call themselves winners, and the 2021 World Series® will showcase all of the blood, sweat and tears that goes into the title “World Champions.” This program features an adrenaline-filled feature-length film, highlights from the entire postseason and incisive bonus features.