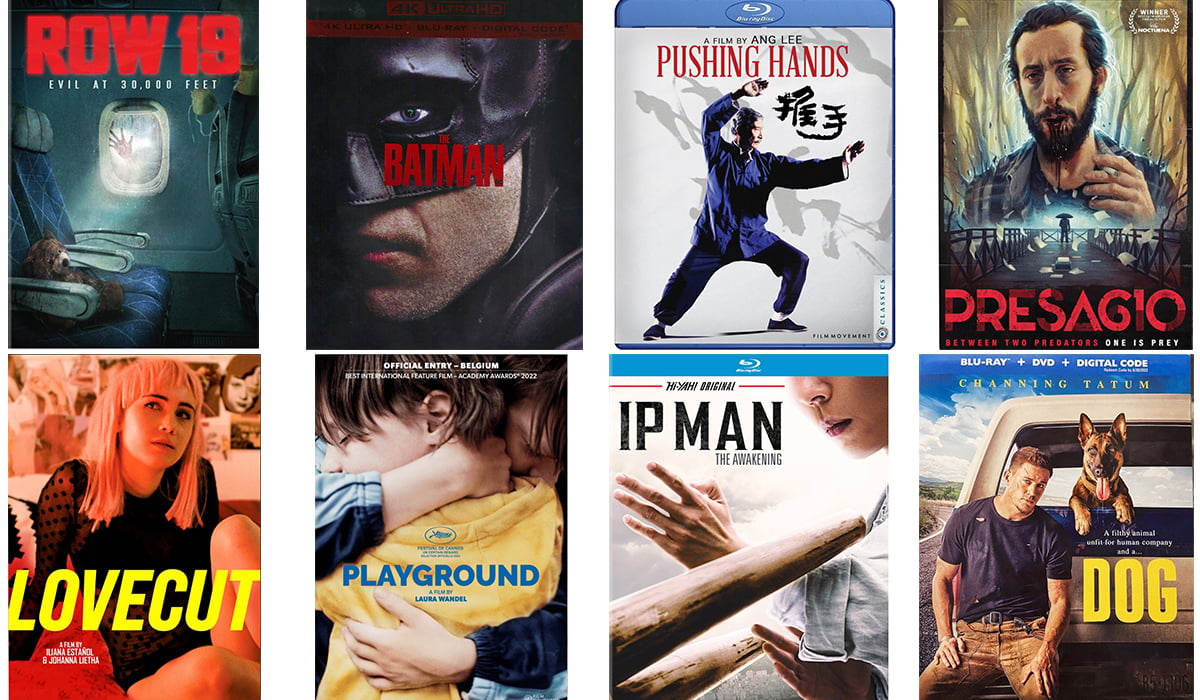 THE BATMAN
Warner Bros. Home Entertainment
Available on 4K, Blu-ray, DVD and Steam on HBO Max – now
When a killer targets Gotham’s elite with a series of sadistic machinations, a trail of cryptic clues sends the World’s Greatest Detective on an investigation into the underworld, where he encounters such characters as Selina Kyle, Oz, aka The Penguin, Carmine Falcone, and Edward Nashton/aka The Riddler. As the evidence begins to lead closer to home and the scale of the perpetrator’s plans becomes clear, Batman must forge new relationships, unmask the culprit, and bring justice to the abuse of power and corruption that has long plagued Gotham City.

PRESAGIO
IndiePix Films
Available on DVD/Digital Now
Camilo, a young writer traumatized by the death of his wife and child, describes his disturbing experiences to a psychiatrist skilled in hypnosis. Meanwhile, in his waking life, there’s a mysterious “umbrella” man, who’s him to finish his painfully autobiographical novel, regardless of the consequences. Part thriller, part experimental horror film, director Matias Salins has crafted a gritty psychological voyage into the inner turmoil behind one man’s dark despair and creativity.

PLAYGROUND
Film Movement
Available on DVD/Digital Now
In this debut feature by writer-director Laura Wandel, shortlisted for the Academy Award® for Best International Film, the everyday reality of grade school is seen from a child’s-eye-view as an obstacle course of degradation and abuse. Following 7-year-old Nora and her big brother Abel, we see Nora struggling to fit in before finding her place on the schoolyard. One day, she notices Abel being bullied by other kids, and though she rushes to protect him by warning their father, Abel forces her to remain silent, while he endures more humiliation and harassment by his peers.

DOG
MGM & Warner Bros. Home Entertainment
Available on Digital, Blu-ray and DVD Now
Army Ranger Briggs and Lulu buckle up for a road trip down the Pacific Coast in hopes of making it to a fellow soldier’s funeral on time. Along the way, they’ll drive each other crazy, break a handful of laws, narrowly escape death and learn to let down their guards in order to have a fighting chance of finding happiness.

ROW 19
Well Go USA Entertainment
Available on Digital, Blu-ray & DVD Now
When several flight passengers suddenly suffer gruesome, unexplained deaths, a young doctor on board begins to suspect that the shadowy, terrifying force behind her own worst childhood nightmare may be back for blood.

PUSHING HANDS
Film Movement
Available on Blu-ray/DVD/Digital Now
Having just moved from Beijing, elderly tai chi master Mr. Chu (Sihung Lung) struggles to adjust to life in New York, living with his Americanized son Alex (Ye-tong Wang). Chu immediately butts heads with his put-upon white daughter-in-law, Martha (Deb Snyder), a writer who seems to blame him for her own paralyzing inability to focus. But when Chu begins teaching tai chi at a local school, his desire to make a meaningful connection comes to fruition in the most unexpected of ways.

LOVECUT
Omnibus Entertainment
Available on DVD/Digital Now
Tracking the intertwining stories of three young couples, LOVECUT keenly observes the contemporary challenges of identity and sexuality posed by the digital age. As the virtual nature of Alex and Momo’s relationship allows them to conceal uncomfortable truths, Ben and Luka’s promising match on a dating app collides with the barriers they face in real life. Meanwhile, Anna and Jakob realize the radical visibility of uploading their sex life to the web.