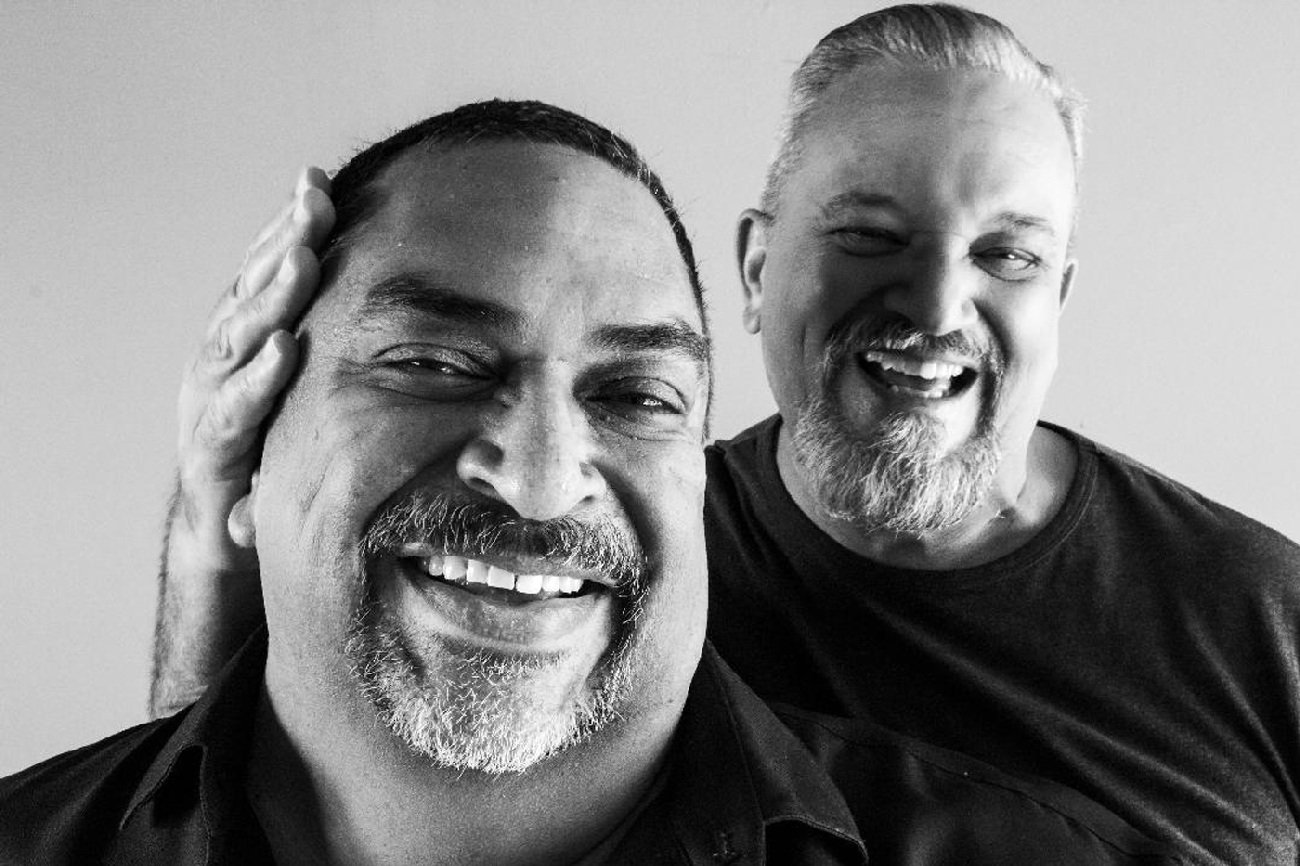 Philip Barragan wasn’t supposed to live to see retirement. That’s what he believed at 23 when in 1989 he became part of the first wave of individuals diagnosed with HIV. That was a very dark time in the HIV epidemic when the expected lifespan after one tested HIV positive was 7 to 10 years at best. This is because the modern HIV diagnostics and medications were not yet developed and not much was known about the disease. “I figured I would be checking out from this life by my 30th birthday.” A healthy person now and after 33 years living with HIV, Philip faces a different challenge: Figuring out how to provide for he and his husband’s medical needs in retirement when they will no longer both rely on Philip’s employer-based medical insurance and when their income will be reduced.

After testing HIV positive in the late 80’s, “I left Catholic seminary in 1989, but I was still drawn to help others, so I decided on a life of service in the secular world. I dedicated my life to helping other people living with HIV and AIDS by providing front-line services as an HIV case manager, a treatment advocate and an associate director of an AIDS service organization, says Philip. Eventually he found his way to a local health department where he has spent the last 20 years working with disenfranchised populations, currently as a senior manager working with the residually uninsured.

Philip is granted health insurance through his work and this is generally referred to as employer-based health insurance. Today, his husband is covered on his work health insurance. Now at age 67, his husband has had Medicare for two years and each year they have explore the option of moving him to a Medicare Advantage Plan (MAP) but that has been a challenge. At present, it is costing the couple about $500 a month for Philip to cover his spouse on his employer’s plan. When Philip retires, he will not be able to continue coverage for his spouse on this health insurance plan because of the plan’s rules. Also, there will be less income for the couple to live on when Philip retires.

“My hubby is also HIV positive. We are both on a modern medication regimen, which would cost both of us more than $2,000 for a one-month supply of 30 tablets. Our insurance, one of the best you can get, has a copay of $20 for a three-month supply. This is an absolute deal and we are grateful. The trouble comes in when we look at how that medication is covered by a MAP (Medicare Advantage Plan) when my good employer based insurance goes away for my husband,” says Philip.

“The methodology of how MAPs cover “higher tiered” medications such as our HIV meds gets quite complicated. Suffice it to say, even MAPs targeted at the HIV community result in the plan member having to pay around 25% of the monthly cost, usually resulting in nearly $700 monthly copays for the entire year.”

There is a national program called the AIDS Drug Assistance Program (ADAP), which has been around since 1987. It is a wonderful program that provides coverage for individuals otherwise unable to get their medications. ADAP requires individuals to have an income at or below 500% of the Federal Poverty Level (FPL), which is currently $64,400 per year for an individual or $73,350 for a married couple. Philip and his husband fall into the category of earning too much to qualify for ADAP. Philip’s healthier income plus his husband’s modest Social Security income puts the couple over these amounts.

“The Medicare system is still not fully up to date for the middle-class aging HIV population. I know I must not be the only person seeing this landscape. Why haven’t I heard others screaming about this? Are we supposed to go quietly into retirement accepting an imperfect situation saying, “Thank you, sir. May I have another?”
To look more into this situation again this year, I decided to reach out to a local AIDS service organization and I spoke with a lovely HIV benefits specialist. The landscape of benefits has changed so significantly since I was on the front line so I knew I needed a specialist who was up to date on all things HIV. He initially stated because of my income level, he would be unable to enroll my husband as a client, but he would offer some quick guidance.”

Philip says the counselor told him, “You’re thriving and you have what none of my other clients currently have.” Philip explained that even with his income, the couple was still distinctly middle-class. Philip says the conversation ended with the counselor and him arriving at these potential solutions: Switch to an older combination of antiretrovirals, which are not as expensive as the modern day classes of meds, or divorce his husband to separate their incomes at some point in the future, perhaps when he retires and can no longer cover his spouse on his employer based insurance. In separating their incomes, his husband could meet the income threshold to get assistance through ADAP and have access to the most up to date, state of the art HIV medications.

“So it seems I wasn’t supposed to live to see retirement, or I shouldn’t have done as well as I have because our HIV safety net programs weren’t designed to handle situations like mine—a person living with HIV now 33 years after my diagnosis with a good job and preparing for retirement.”

“Our national health care system is in a much better place now than it was in 1989 when I marched with ACT UP Los Angeles, but it’s imperfect. My HIV-positive friends who taught me how to use my young voice back then have all since passed away. There are plenty of resources and programs available for those living at or below the FPL. But the reality is different if you are doing financially well enough to not be considered impoverished.”

Philip says he will have to divorce his husband upon his retirement so his husband can continue getting his medications. This because his employer based insurance will no longer cover his spouse and their combined retirement income will still keep the couple above those income thresholds for assistance when his husband transitions to a Medicare Advantage Plan for care.

“I will be blessed with lifetime medical coverage from my work, but the clock is counting down for my husband. So much for planning for our future together as a married couple. That legal status carries a certain level of significance as well as implications that cut both ways.”

“I may be thriving, and I am grateful for what I’ve achieved as an advocate, activist and writer, but I find it hard to reconcile the reality of living past my so-called expiration date. This year we observe the 34th World AIDS Day on December 1. Clearly, there is still work to be done. Personally, after three decades, it’s hard not to feel like I’ve stayed too long at the party, and all I can hear are the words of Dame Maggie Smith: “I fear I am a relic, and I have misplaced my tambourine.”

Phillip’s situation is not unique, it is more of the norm and illustrates how public benefits are administered for people living with HIV who are and/or were fortunate to be employed and looking at retirement. For many, in order for them to feel secure that they can stay on the most modern medications they will often be faced with co-pays if they are fortunate enough to qualify for Medicare when they leave their employer based medical insurance. If their incomes are above the threshold for the AIDS Drug Assistance Program, now at just over $64,000 they will not qualify for public assistance support. With basic living expenses related to housing, food and transportation continuing to climb, persons with HIV who are clearly not rich but not poor enough to get help will live on fixed incomes and will be forced to go without.

In Los Angeles County, more than 50% of all persons living with HIV and AIDS are over the age of 50 and face certain retirement in the coming years so this will be a mounting problem. Retirement savings, for those who worked a life time to accumulate, will be used rather to meet medical expenses as opposed to providing for a flexible retirement that many should be able to have.

Public policy changes need to be made to address this situation. Last year through an Act of Congress called the Inflation Reduction Act, the cost of monthly insulin will be brought down to $35 a month for those on Medicare beginning in 2023. How can we mobilize as a community to see similar concessions for people with HIV on Medicare to control HIV drug costs?

This healthcare insurance and benefits situation is also a challenge for tens of thousands of people living with HIV who are on public benefits and want to work. To be sure, there are many now healthly people with HIV who rely on the AIDS Drug Assistance Program, Medicare, MediCal or other Ryan White Programs including housing assistance who want to go back to work. They seek to work to develop a career or just to earn extra money even if it’s part time and even if its just for a few years. But they don’t make the move because they are worried they will loose all or parts of their benefits which have kept them alive, healthy and provided for their care, while at the same time, keeps them impoverished and limits their choices around employment. Public policy analysts need to work with people living with HIV to fully understand the scope of the issue.