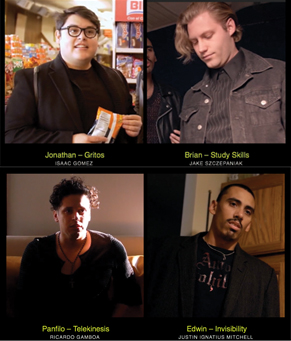 Today’s political climate is difficult for people with progressive politics.  The House and the Senate have Republican majorities that, in aggregate, support the rolling back of affordable healthcare and strict enforcement of our immigration system. Leftists find themselves increasingly unsupported by the administration. Ricardo Gamboa’s responds as a true anathema to Trump and his ideologues with his web series, Brujos.

BRUJOS finds its oppositional energy in the underside of the U.S. mainstream’s left-right political spectrum. Premiering online on January 17, 2017, the show describes itself as, “…a queer-of-color web series that follows [three]gay Latino grad students that are also witches as they try and survive the school semester and a witch hunt led by the wealthy, white, male and heteronormative descendants of the first New World colonizers.” The campy, horror-themed web series follows characters Panfilo, Edwin, Jonathan, and Brian mix up magic, the academy, sex, the politics of systemic oppression, and comedy with the representation of queer Latinos. Perhaps most importantly, the show opens up the possibility of imagining new ways to be in the world within ongoing political struggles.

The ascendance of fake news and the much-criticized alternative facts has eroded public trust in mainstream media outlets while swaying others to fish endlessly for schools of political red herrings. As media consumers, we are all subject to this blurry combination of rhetoric and reporting, all of which is, in one way or another, changing the ways we absorb information. This is the nature of storytelling. At the same time, content creators are using fiction to comment on the nature of our political and social realities: through satire, parody, subtext, sub-plot, and more. Such tools are often part of the work of independent queer artists of color, and the help of the internet and web-based platforms that support content them. OpenTV, with its emphasis on showcasing “queer and intersectional television,” is one platform that makes Brujos possible and other queer of color web series possible.

Gamboa himself has been uncompromising in his vision for the web series. Blending activism, scholarship, and art, Brujos uses allegory to retell the colonial witch hunt in the present. One of the many disastrous consequences of European contact with the Americas was the imposition of Christian customs onto the spiritual practices of indigenous peoples, many of which survive today, true to tradition are adapted over the centuries. We see this fighting back revived in the main drama between straight white men and queer brown men, the classroom scenes where the coven dissect white-dominant queer scholarship, and the unapologetic centering of queer of color storytelling in the context with the intimacy and familiarity with the occult, latin american practices you find in mainstream media accounts of witchcraft.

At the same time that the religious right joined conservative political forces in the 1970s and onward, the United States saw an emergence of politically conscious and activist witches that decried misogynistic and earth-unfriendly legislation. The mainstream media, in all its forms, has embraced the witch. The label and mystique has been applied liberally to a range of artists that orient themselves toward the dark, mysterious, and occult. White womanhood has been the primary way for us to identify the witch in the mainstream (which parallels the gains white feminism has had in the United States). However, with the explosion of self-published content online, queer people of color have been asserting themselves further in the range of practices of self-care and oppositional knowledge that they share online and in public.

Brujos, in its brilliance, reverses the racial dynamic operative within mainstream stories of witchery. Characters Panfilo, Edwin (whose power of invisibility has been revealed to be the most poignant commentary on feeling unseen),  and Jonathan all have supernatural powers, and white character, Brian, chimes in for comic relief. The choice is significant. More often than not, queer characters of color have little to provide in terms of substantive complexity when content is not drive by queer people of color. In addition to the quality production, wonderful cinematography, queeny punchlines, and shameless sexuality, what is the magic of this web series? The gift of the imaginary. Seeing ourselves beyond our pre-defined roles is the magic this show bestows.

Gamboa is fundraising to complete the series’ first season. Please consider donating, if you are able. You can watch all four episodes the webseries at BrujosTV.com and see for yourself why you need 8 more.