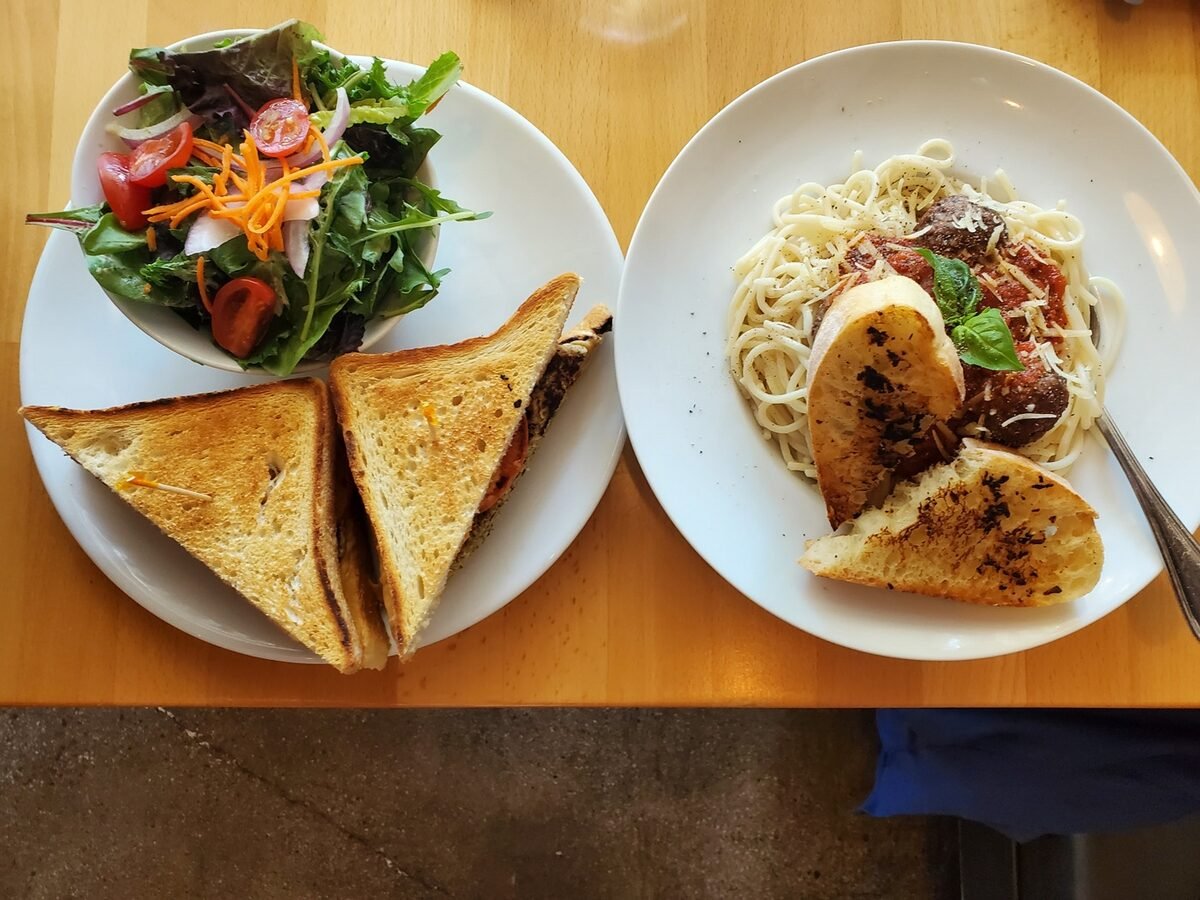 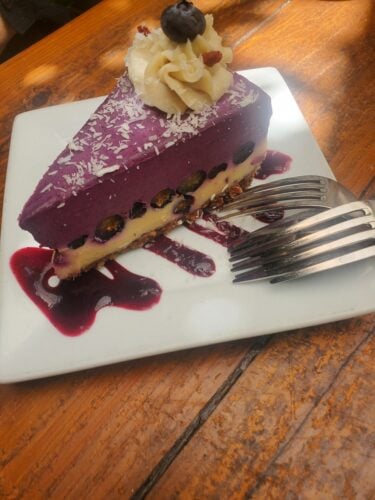 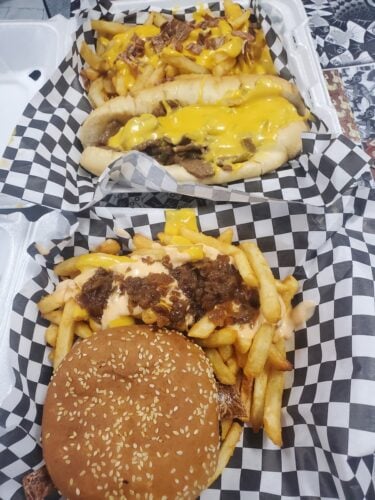 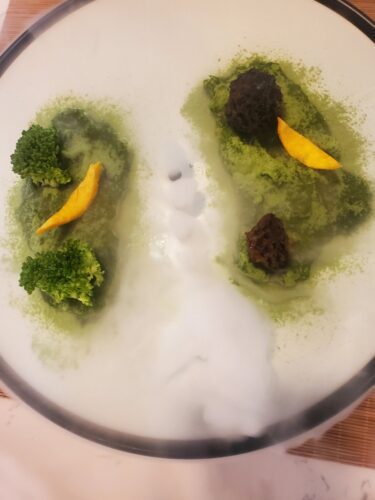 In recognition of Thanksgiving dinner guests who may want no actual turkey, this month we’re highlighting restaurants serving plant-based version of meat, which you can pick up in advance.
With Hollywood and the music world embracing a healthy, holistic lifestyle, it’s no big surprise that many celebrities have taken this a step further by becoming vegans (no animal foods in their diet, while most vegetarians also include dairy and/or eggs). Among them are Brad Pitt, will.i.am, Ariana Grande, Alicia Silverstone, and Russell Brand. Others prioritize a “plant-based diet,” which might include some meat and fish, so mainstream restaurants in Southern California increasingly have diverse offerings enabling any group with mixed preferences to find something on the menu when they dine out. We previously reviewed Little Pine (founded by Moby) in Silver Lake and Sage Restaurant in Pasadena.

Real Food Daily
https://www.realfood.com/ has had a long-time location on La Cienega near Beverly Blvd. and recently opened another in Pasadena. The new owners, Adaline and Thomas, maintained much of the original vegan menu (famous for its all-day breakfast), made portions bigger, and added delicious new dishes. We were especially fond of the Impossible Spaghetti & Meatballs, the Tuna Almond Melt sandwich, and the Cheeseburger Egg Rolls. The Superfood Smoothie and Banana Maca were refreshing and filling (not to mention very healthy). The Chocolate Cream Pie Cake and Vanilla Bean Cake were desserts as good as we’ve ever had in any kind of restaurant. There is something for everyone with any cravings, including Garlic Noodles, a Margherita Pizza, and Spicy Ramen Bowl (and there is an extensive children’s menu).

Sun Cafe
https://suncafe.com/ in Studio City near Universal Studios is in a lovely setting (it has been named one of the most romantic vegan restaurants in the U.S., among its many culinary awards). It is one of the few whole foods restaurants with an all-organic and dairy-free menu and willing to accommodate special dietary needs, such as making some dishes gluten-free. Some dishes are noted as being a good match with indicated wines. The starters include BBQ Cauliflower, they serve seasonal raw soup, and one salad is the Legendary Kale Colossus. We sampled the powerful Bambucha Guava Punch Kombucha On Tap. Our favorite sandwich was the Reuben and among the entrees customer faves are Mac & Cheese and Baked Lasagna. The desserts are especially outstanding, especially the Blueberry Cheesecake.

Doomies’ Home Cookin’
https://www.doomiesrestaurants.com/ at Vine and Fountain in Hollywood brags about its menu appealing to those who want “vegan comfort food,” a place you can bring friends who aren’t eager to eat at a “health food” restaurant and think French fries are one of the four essential food groups. It has exact knockoffs of Philly Cheesesteak, BBQ Pork, Shrimp Po Boy, and a Fried Chicken Dinner. Its Peanut Butter Bacon Burger is surprisingly delicious (but sure to include plenty of pickles). There are alternative milk shakes in flavors like salted caramel and mint chocolate, as well as deep fried Oreos. It’s even open for breakfast for those who need a wake-up fix and its NextMex, a vegan taqueria, is next door (or try NextMex Express in City Terrance).

Cafe Gratitude has locations in the Larchmont area south of Hollywood, Venice, downtown L.A., Newport Beach, and San Diego. Since few natural food restaurants are open early, we sought the best plant-based breakfast in town at Larchmont. Note that if you want to see what they offer for brunch (9 am-1 pm) you need to click on the bars on the website for the chain in the upper left, then the location, and then the choice of menus (or just click here: https://cdn.shopify.com/s/files/1/0514/4284/3810/files/CG_Menu_SS22_Print_Brunch_220728.pdf?v=1659643246). On the site, if you click directly on the location and then Menus, what you get is the All Day one (10 am-9 pm). The brunch menu is mouthwatering fun just to read their innovative twists on traditional dishes, such as the Yo Soy Vida Mexican hash with mushroom carnitas and tofu scramble; the pumpkin spice brioche French toast with roasted strawberry compote, cashew whipped cream, and maple syrup; and the acai superfood bowl with granola, cashews, Incan berries, goji berries, cashews, and coconut. Beverages include a mocha latte with cacao and raw honey, Better Booch with ginger and morning glory, and a mink chip shake. Among the bakery’s offerings are a lemon blueberry coffee cake. You’ll leave with awakened taste buds.

Taste of Beauty
https://www.thetasteofbeauty.com/ in Fountain Valley, Orange County, is the most beautifully-designed natural food restaurant we have ever experienced (and we have done hundreds of reviews). Its aesthetic combines Asian Zen principles with Swedish Lagom style (which takes a holistic approach to living that seeks “balance in every area through awareness, moderation, and sustainability,” according to founder Jeremy Yan). This extends to everything from the paintings on the wall to the music and table settings. Each gourmet dish has a poetic name, such as Monet’s Garden and Land of Abundance, with a story behind it which the waitress tells. Each is given a gorgeous presentation, as you can see from the photos on its site and the one here (of Green Mountains and Rivers, made of morels and shiitake mushrooms, mashed potatoes, tofu, and green powder, with dry ice from the bowl underneath the plate providing the illusion of fog). There are two choices of eight-course meals ($89 each) and we shared both. The Orchid Tasting Menu starts with a really delicious soup made of oat milk, chestnut, black garlic, shiitake, black fungus, carrot, celery, and daylily. It ends with a dessert made of coconut and oat milks, lactobacillus, cherry, raspberry, pistachio, and black sesame. The Plum Blossom Tasting Menu begins with a dish of assorted mushrooms, bamboo fungus, and quail egg, while the dessert is made of yogurt, avocado, burdock, dragon fruit, pear, and apple in a cone. Plan at least two hours to savor the experience. Even your most sophisticated friends who may have never been to a vegetarian or whole foods restaurant will be impressed.