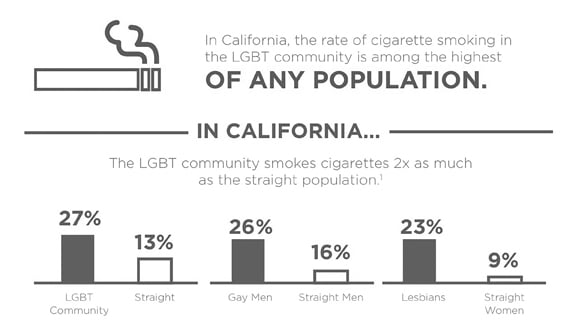 More than 50 years ago, the U.S. Surgeon General revealed just how deadly tobacco actually is, sparking an arduous battle to limitthe influence of tobacco companies. Still, Big Tobacco remains a major predator in many communities today.

I’ve seen Big Tobacco’s deceptive marketing tactics take full effect in the way they target California’s LGBT population through my work with the California LGBT Tobacco Education Partnership and hearing stories from individuals trying to quit. I’m most recently alarmed to learn about Newport cigarettes being distributed at Pride eventsand e-cigarette companies sponsoring Pride events. Research has also shown that the LGBT community’s heightened smoking rates may be linked to the stress of discrimination and direct targeting by the tobacco industry.That is unfair and unacceptable. Our communities fight too hard for equality to let one industry tear us down.

Tobacco use impacts every single one of us. When you smoke a cigarette, you not only increase your risk for heart and lung disease, but you also put the lives of those around you at risk.Secondhand smoke has more than 7,000 chemicals, many of which are toxic and known to cause cancer.Smoke is especially dangerous for young children.[5]That’s exactly why wehave to fight to get tobacco out of our communities:to keep our loved ones and our familiessafe.

November 17th marks the American Cancer Society’s annual Great American Smokeout, a day challenging people who smoke to put down their cigarettes for 24 hours and spark a long term path toward living tobacco and nicotine-free. This year, I’m calling on all who smoke, and especially those from our communities, to take a stand against Big Tobacco, which has been deceptively invadingour lives for decades.

Smoking is the single largest preventable cause of death in the United States. It kills more people each year than HIV, car accidents, illegal drugs and suicide combined. Don’t let Big Tobacco control our future.It’s time we stop the tobacco industry, before more lives are lost in the smoke.

Bob Gordon, MPH, serves as Project Director for the California LGBT Tobacco Education Partnership. He also co-facilitates The Last Drag, a free stop-smoking program for the LGBT community in San Francisco. As Co-Chair of the San Francisco Tobacco Free Coalition, Bob helped organize San Francisco’s Tobacco 21 ordinance and he was key in the passage of the first tobacco-free pharmacy ordinance in the US. Bob has been honored with a number of awards for his work, including the 2013 Community-Based Leadership Award from the Alcohol Tobacco and Other Drugs Section of the American Public Health Association and the 2013 Community Activist Award from the American Legacy Foundation.