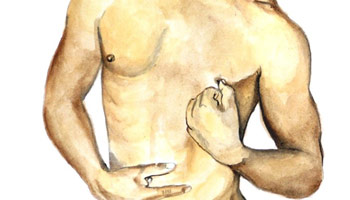 I’m here in complete darkness and my eyes hurt trying to figure out the shape of the bodies walking by. I feel a little nervous, it is my first time in this place and I don’t know what I’m supposed to do. My best friend Jorge suggested that we should come here. He said it could be fun to see all these perfectly shaped bodies parading by, showing off proudly the best they have.

He told me I didn’t have to do anything if I didn’t want to, but I should give it a try.
What he didn’t know is the fact that I had been dreaming about seeing him naked. I became obsessed with the idea when I meet him at the gym, but my hopes dropped to zero when I found out he was married. But just when I thought the battle was lost, he confessed to me one night that he had fooled around with a guy when he attended high school, and he kind of liked it.

He told me he heard about this place and decided to give it a try. Although he wanted to keep it completely private, he asked me if I wouldn’t mind going with him. Actually, he wanted to be “protected” if someone decided to put a move on him and asked that I act like if I was his lover, so guys wouldn’t try to go any further with him. He just wanted to see what it was like to be in this place. So there I was, trying to act cool, but instead feeling very confused, I didn’t know if I should join and be part of the action, or just watch and go nuts thinking about all the things I could do there.

My heart started to accelerate when I felt a hand brushing against my right leg. I tried to pull it off, but I didn’t want to deprive myself from the new experience. Slowly the hand travels up and down my leg until it gets so close to my genitals. My engorged tool jumped to the warm touch of the hand, and I decided to let him act freely, I wanted to be part of that world for one night. I wasted no time and got hold of that guy’s erection. He spread his legs to allow me free access. Soon he stood up and placed himself between my legs and started to play with my chest, my abs, and my legs. I placed my hands around him and took hold of his hard buns. He pushed his body against mine, and our erected poles entangled together, sending electrical waves through my whole body. I closed my eyes and imagined that Jorge was there touching me. I had to keep my fantasy going.
All of sudden I felt a leg brushing against my left leg. But I decided to ignore this one. I wanted to keep my dream going, and continued fantasizing that the guy embracing me was Jorge.

The guy on my left stayed there. He was persistent and even when I ignored him, he continued pushing his leg against mine. I felt bad not giving him attention but he didn’t seem to care. The guy in front of me noticed that and took hold of my hand and placed it on the leg of the guy to my left. He wanted to invite him to join. I decided to try it and to caress his leg with my hand. My mind started to play tricks on me. The guy to my left seemed to have similar characteristics to my dream man. His legs were hard, hairy and thick, just like the legs I saw on Jorge at the gym. I let my hand explore further up and landed on a set of perfectly defined abs. They felt cut and defined just like Jorge’s and when I touched his pectorals I went completely crazy. They were covered with a fine mat of hair that resembled those in my dreams. This guy was definitely closer to my vision of the ‘perfect man.’

To my luck, I noticed a shadow moving towards the guy in front of me and in seconds, they got involved in their own world. They walked away and left me with my Jorge look-alike man. I really wanted to think it was him, but I didn’t think it was possible because Jorge was very clear about not wanting to get involve at all with anybody. He just wanted to look, and it was obvious that this room was too dark for that purpose. My hand continued exploring until I found his hard-on. I played with it for a while, imagining what Jorge’s would be like.

It was perfect. It felt so hot to my touch, uncut but the skin wasn’t covering the mushroom head, just enough to form a ripple at the base. What made it different was that it was completely hard and curved up, making it delicious to the touch. I found my way down between his legs and my lips softly kissed the tip. It was obvious that he wanted more, but I wanted to take my time. I buried my nose in the thick nestle of hair, trying to recognize his scent, but he only smelled clean like soap. I engulfed the whole thing while my hands continued traveling over his body. I wanted to bury my face between his legs. I felt as if it was really him, “Jorge’ and I knew he would freak out if he knew it was me.

The further I got to explore the more nervous I got because everything matched Jorge’s body. I started to go up with my tongue tracing circles around his hard abs, and my hand to his neck and on the back of his head. When I touched his shaved head I had no more doubts. It was Jorge. I was in shock. My dream had finally come true and my emotions went wild. I didn’t know if I should continue. What if he wasn’t aware it was me?
Would he push me away when he found out? He made it clear one day when he told me he never fooled around with his friends. But all this time dreaming and waiting was worth the try.

All my doubts disappeared when he stood up and pulled me with him. His face got right in front of mine and he kissed me fully on the lips. His kiss made me tremble with desire and it was hard to deal with the fact that he was finally mine. But if I thought that was it, I just couldn’t believe it when he turned around and offered himself to me. In a soft voice he told me to take it slow. I was so glad I kept a condom with me and proceeded to put it on. I wanted to take him at once but had to exercise great patience.

I started slowly going in, slowly and tried to help him become accustom to the new sensation. Softly, I grabbed his ear lobes with my moth and teeth then I kissed the back of his neck. The scent of his cologne turned me on even more. My hips continued pushing in and he moved his body between my legs to let me get deeper. I had one hand on his chest close to his heart and the other one on his rod feeling how they pulsated simultaneously. I loved the expression on his face, his mouth open breathing hard, while his hands were placed at each side of my waist to keep our bodies together.
My blood was boiling, all of sudden an electrical shock went through my body when I felt the pressure between my legs grabbing hard on my shaft. I immediately knew what was happening to him and I hurried to get to the same point to match his shocking orgasm. His fingers dug in my buns, and I became so sensitive to his sweet torture. Out of me came all the feelings that I have had for him in these months and I wanted him to know that.

The sensation was overwhelming and I was speechless. I wanted to say something but no words could come out. We separated and he stepped out to the shower area. I stayed there just thinking about what had happened. I took a shower and when I met him in the locker room I couldn’t look directly at him, but the way he was checking me out told me that that wasn’t going to be the only time we would be together.