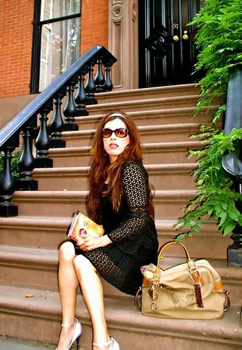 As I was saying last month I moved from Miami to New York only knowing one person who helped me out a bit. Having lived in San Diego, Los Angeles, San Francisco, and Miami, it was only time before I made this move to NYC. So in 2007 my journey in NYC began. I called Queens home. The area of Jackson Heights was near me which is where the gay section of Queens is. Next to Manhattan Queens is the next LGBT friendly burrough in NYC. That and inexpensive living is the reason why many of us choose to live there and love it.

I started dancing at the tranny parties and working my way around. Meeting more trannys than I had ever wanted to meet. You have to understand the tranny party scene in NYC, as in many other cities, is competitively fierce. The gurls can be friendly and nice but when it comes to the men the claws come out.

So I obliged. Little by little I started making aquaintences and getting along fine. After a while I got tired of the tranny party scene and headed into the gay scene in Manhattan. That was fine but not a place to meet gentlemen who buy you drinks and ask you to dance. In gay clubs you get bored because of that. So I worked that scene and then decided to move to the gay/trans scene of Queens, which is very Latino. It was fun, ghetto, and a little bit more dangerous. I mean these queens in Queens will cut you… lol All the while I decided to start my own webzine being that I had a lot of content what with my articles, videos, and pictures of all the hot and happening events in all of the city. So VivaLaRiviera.com was born. Party pictures, videos, and celebrity interviews amongst other things. Updated daily. Check it out people.

Of course living in Queens, the most ethnically diverse area in the world, I got to meet people from different cultures. You know in California you have a limited amount of cultures in the Latino community because most of us are Mexicans. But in Queens the numbers in each of the Latin communities is high. You have the Mexicans, Colombians, Ricans, and of course what ended up being my favorite los Dominicanos. Honey you don’t know big platano macho until you’ve been con un Dominicano. LOL.

Ahem… so yeah. Again I went to NY excited about Boricuas but ended up playing favorites con los Dominicanos. The best and the biggest are the go-go dancers. And yes they are real. Sorry mis Mexicanos but yeah…

New York is all they say it is. One of the best cities in the world, not that I’ve been all over the world but it is definitely special. There is always something to do. Spring offers some hot free shows in the morning with some of todays hottest artists, there are many free events to attend, and of course just walking the island is fun. It is actually a lot smaller than people think it is, I mean it is only an island, you know. Most New Yorkers don’t do the touristy things unless you have family visiting and you take them around. That was how I got to go see the Statue of Liberty, otherwise you don’t pay attention to those type of things.

With my webzine I was able to start attending all the major events the LGBT Community held. Doing the red carpet interviews was how I got to interview a lot of my favorites including Vanessa Williams and many of the gurls from RuPaul’s Drag Race. Some of the major events held there are the Glaad Media Awards, the Night of 1000 Gowns, the GLBT Expo, and my favorite the Tulips & Pansies The Headdress Afair, what made it my favorite was that all of the models there were skinny with small boobs, just like me. LOL I made some really amazing friends as well that I hope to be able to keep in touch with them as the years pass like I have with some very special people that I still keep in touch with from my years in Miami. Love you all.

In my last year there I started contributing to one of the gay rags there called Get Out Magazine and even started my own live web talk show with my bff Sassy. Monday Nights are a Bitch live web talk show can be found at justin.tv/divaslive and will begin broadcasting live again this summer so stay tuned for more on that. It is amazing that now we can produce our own talk show and broadcast it live on the internet for everyone to see. I luv it.

Unfortunenately or fortunately the winters take their toll. I was OK with the NY winters for the first three years. I mean it was fun having an experience living in a place where it got so cold that it snowed. Definitely something worth the life experience but like I said three years were cute and fun but by the fourth and worst winter in years in NY it was time to move on. That is one of the reasons why I decided to leave NY. The main reason though was because after being away so far from family I had to come closer.

My parents are only getting older and I’m lucky that they are still around so I come home to enjoy being with them. I loved my life experience in NY and will go down in my life history as one of the most wonderful things to happen in my life just like Miami and Los Angeles but at some point you gotta come home and Lassie I did. I am happy and anxious to see what doors open up for me here in LA. And thank you Adelante Magazine for being with me every step of the way. Hello Hollywood, I’m here.