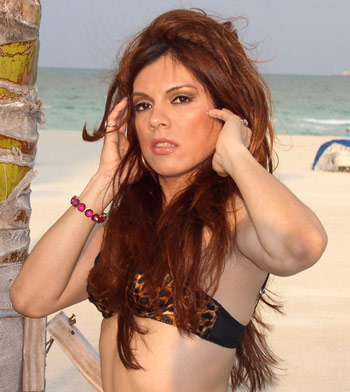 I was born in Tijuana, Baja California. I was raised in Escondido, Cali. I’ve lived in Los Angeles and San Francisco. As you can see I’m a West Coast gurl. But for the past seven years I’ve been in the East Coast. Miami for three years and now NYC for four. But this April I come home. That’s right my fellow Californians I’ll be home for Christmas err rather Easter. And this time for good. I hope … So I want to take this time to tell you a little bit about my journey and what I have learned and experienced.

Back in 2004 I got a little bored with LA and wanted to go explore a different city. A friend of mine had moved to So. Fla. so I decided this was my opportunity to give Miami a try. The only thing I knew about Miami was that Madonna used to live there and made part of her Sex book there, in pictures that is. So I decided South Beach was good enough for me. I saved up some money, barely enough to get an apartment, and left my apartment in Hollywood to my best friend and made my move. Never leave your apartment to your best friend by the way. They won’t pay and will abandon it and end up giving you bad credit. I learned the hard way.

So anyways I took a one way flight to Miami only knowing one person there. Of course I had visited it about three times and loved it but had only one acquaintance. Within a week I was living in my own studio apartment one block from the main beach and around the corner from the Versace mansion. Prices were a little bit higher than LA but not too bad and certainly worth the price. Well, since I knew no one there and my friend was living in Pompano Beach, about 30-40 mins. North of me I had to get out of the house and socialize.

I picked up all the gay rags and found all the clubs/bars near me where I could hang out and that seemed to be trans friendly. That is always an issue in the gay scene you know. I tried them all but Twist seemed to be the place where not only everyone went but that was the most trans friendly right there on Washington Blvd. right across the street from the Police Station. So Twist it was seven nights a week. Yes, that was the only way I was going to make friends. South Beach is actually a small beach community so it was not hard for a friendly tranny such as myself to make friends. This was where my South Beach adventure began.

I made several tranny friends of which some are still my BFFs even now that I’m in NYC. We started hanging out and introduced me to other places. Eventually I was invited to become a dancer at a bar in Hollywood, Fla. of course, that was starting to become a trans bar. And that is where I met all my friends. Trixies Bar was a hoot! It became the only trans bar in So. Fla. and we ruled the night. It started to get pretty busy and fun on the weekends. So this was my new home. All (most) of the gurls got along and we made some fun times that will always hold a special place in my memory. Those were the Trixies nights. Think Demi Moore’s Striptease movie, minus the snake of course. LoL. We had some good times and ran through men like … gurl I won’t even get into that.

And of course as anywhere I go I not only enjoy my time but I take care of the creative part of my life as well. I wrote for a couple of gay rags, did some celebrity interviews, and hosted an awards show. I actually found time to work on my paintings it was so relaxing there. And oh yes the men. Mmm… I was excited about the Cubanos when I got there but then of course I discovered the Argentinos and that did it for me. I had never met one in my life so needless to say I got to know a lot of Argentinos, in a biblical sense. Brazilians were delish too. Basically men from all over the world in that small little million dollar sandbox and all for me. You can imagine. Summers were extra hot and muggy, the kind where you start sweating as soon as you step outside the shower but the rest of the year was perfect. So warm and nice, I would ride around in my bicycle all over the beach. I survived a couple of hurricanes. Not too bad but still freaky when you live alone. Eek! So after three years the moving bug bit me again. This time I had set my sight on New York. The big apple was always in the back of my mind since I was a teenager it just always seemed impossible, except now that I was only a three hour flight away from it. I made really good money dancing at Trixies, which is now defunct by the way, so I decided it was time for New York, after I had visited a couple of times.

] Again, I knew only one person in New York but I made the brave move and relocated to Queens. Manhattan seemed too intimidating and expensive so I was glad to get a studio apartment in East Elmhurst walking distance from La Guardia Airport. I was paying same price but this one was located far from everything including the train, which here everyone takes the train to get around. And get around I did …