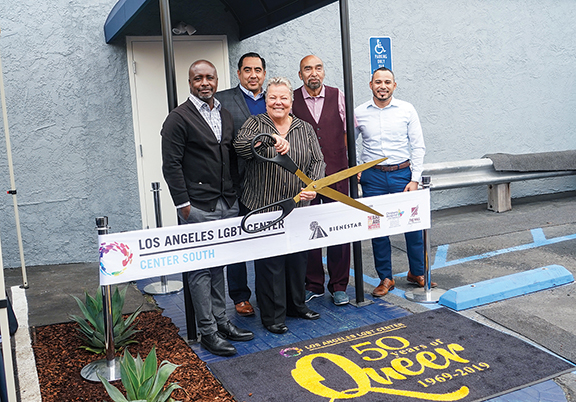 It’s known as Center South, a community space near Leimert Park which the Los Angeles LGBT Center opened in January.

There’s also a computer lab and a safe space to hang out.

“Even before we opened, local residents have been very curious and asking us what the space is going to be and what ‘LGBT’ means,” said David Flores, senior program manager of Center South. “So, we’ve already gotten the opportunity to engage and educate with neighbors about the importance of providing our services.”


Center South’s services are open to anyone living in South L.A., but there is a focus on addressing the health needs of young gay and bisexual Latino and Black men (ages of 12 to 29) and transgender women of color because they are most vulnerable to testing positive for HIV.Los Angeles County’s Department of Public Health revealed in its 2017 HIV Surveillance Report that South L.A. had the second highest rate of HIV diagnoses in the county. What’s more staggering is that 1 in 4 gay and bisexual Latino men will test positive for HIV sometime in their lives if nothing is done to curb the rate of HIV transmission. For gay and bisexual Black men, it’s more daunting: 1 in 2 will test positive for the virus sometime in their lives if the rates don’t change.

The creation of Center South is the latest step in the Los Angeles LGBT Center’s long-term commitment to care for LGBT people living throughout the city. More than 60 percent of the Center’s clients are people of color, and most of them are low or moderate income. The Center’s largest facilities, such as the Anita May Rosenstein Campus, The Village at Ed Gould Plaza, and the McDonald/Wright Building (where its Health Services and the Jeffrey Goodman Special Care Clinic are headquartered) are all located in Hollywood.

“But not everyone can travel a long way to come to us. In fact, in our community survey, many asked us to consider expanding our reach,” explained Los Angeles LGBT Center CEO Lorri L. Jean. “So, our first effort in that regard was a little over four years ago when we opened Mi Centro in Boyle Heights with the Latino Equality Alliance. Our second effort was slightly under two years ago when we opened our Trans Wellness Center in Koreatown with a handful of partners.”

Ryan Wooten, who identifies as half Latino and half Black, grew up near Leimert Park. He’s grateful for the Los Angeles LGBT Center expanding south.

“Having a center here in this location means accessibility. It means representation. It means community,” he said. “I would have to take two busses and a train to travel to the Center in Hollywood. I remember being on the train and thinking, ‘Why isn’t there a place to go in this [South L.A.] neighborhood?’”

On January 13, Center South held its grand opening. Nearly 250 guests joined in the all-day celebration, which included tours of the facility and a ribbon cutting ceremony. The 5,500-square-foot Center South is partly funded by the County Department of Public Health.

“I grew up a mile and a half from Center South so this is a homecoming for me in many ways,” said Mario J. Pérez, director of the County Department of Public Health’s Division of HIV and STD Programs. “It is our hope and commitment that the Center’s new programming will further advance efforts to stem the tide of HIV and STDs and help eliminate stubbornly persistent health inequalities.”

Center South will host several social networking groups on-site, which local young gay and bi Latino and Black men are invited to join, such as:


Center South is open Monday thru Friday from 10 a.m. – 7 p.m. All of the programs and services will be provided for free or at low cost. Center South may be reached at 323-860-3799 or centersouth@lalgbtcenter.org.

“I’m from L.A., and I’ve been waiting my whole life to see something like this,” said Paul Chavez who works in the Center’s Health Services. “There are out, proud queer people in these communities who have amazing lives, and now they have something here that they can adopt and make their own—a safe space for queer people of color.”