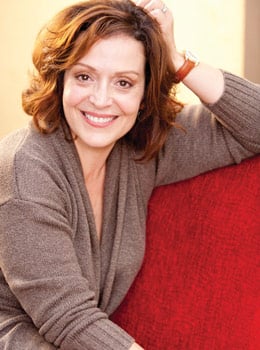 She may not be a household name but Cubana actriz Marlene Forte is one lucky lady. She has worked on many of todays hottest shows on TV such as Community, Castle and the Mentalist and has appeared in hit movies such as Real Women Have Curves and the 2009 Star Trek reboot, amongst others. Work, work, werk honey. All that and this summer she will star along side one of the hottest casts on TV in the continuation of the iconic, and one of this summers most anticipated shows, Dallas. The new and improved Dallas premieres in June on TNT and casts Ms Forte as Carmen Ramos, Ewing family cook. She’s not a maid, shes a cook. Okay! Marlene took some time off her busy schedule to chat with me about how she’s made her father cry, live theater and of course working with those hot boys of Dallas.

Samara: What got you into acting?
Marlene: My 4th grade music teacher put me on stage and I never looked back! We did an adaptation of Great Expectation and I didn’t even have lines but I looked out into the audience from the stage and I saw the footlights and the audience and I knew I wanted to be on stage!

Samara: What did your Cuban family think about your career choice?
Marlene: My dad cried when I told him I was going to be an actor! I didn’t study acting in college.  I studied English Lit and I was going to be a teacher or maybe a lawyer.  I had very good grades and recommendations so when I told my dad I wasn’t going to lawyer school or grad school, but I was gong to wait tables to have my days free so I can audition during the days, he cried.  I am the oldest of 3 girls and I was the first one in my family to go to college.  Acting was never a choice.  But I still remember that feeling in 4th grade and nothing ever compared.

Samara: Tell us about your love of theater?
Marlene: Live theater is the best! It’s immediate. It’s alive.  It’s different every night. It’s a communication with the audience.  When I finally decide to do this, I had to learn how to act, so I started taking classes.  But I got very lucky because I auditioned for a group that was just starting off called the LAB (Latino’s Acting Base) that small group turned into LAByrinth Theater company. I learned everything I know about acting with LAByrinth. Time is everything. Today that theater company and I have come a long way!

Samara: How was the process of getting cast on this show?
Marlene: Casting for Dallas was pretty easy for me.  Although it took me about 2 months to actually read the pilot.  I didn’t even want to audition for this because I didn’t want to be ‘the maid’ on Dallas.  My manager LOVED the pilot and send me the script even before he had an appointment for me. It took him two months to get me an appointment.  They saw everyone in LA before seeing me.  I’m not too sure why they didn’t want to see me but when Paulo finally got the appointment I read the script and LOVED it! Carmen is my character’s name.  I love Carmen.  She’s my mom!  She runs that house hold.  She is in charge.  And she is very opinionated. The words just fell off my tongue.  I wasn’t even nervous.

Samara: What other Latino characters are there on the show?
Marlene: Well there are a few latinos on set.  Starting with the writer-creator Cynthia Cider.  Jordana and Julie are both latina although Julie plays an anglo in the show.

Samara: So I hear the two young male leads are after your TV daughter?
Marlene: Both boys are in love with my daughter. It’s perfect for all sort of drama!

Samara: How is it working with such a hot cast?
Marlene: It is definitely a hot cast.  It’s very nice to go to work! Not only are they good looking, they are very nice! All the them! I really like this cast!

Samara: What can you tell the Latino community so they’ll tune in?
Marlene: I think the latino audience will love this show.  There are two very hot latina’s in the show and not to mention the boys! Also Dallas is very much like a really good novela! Love, deceit, back-stabing, sex, murder, money! I don’t think anyone is going to be disappointed! It’s got Larry and Patrick and Linda from the old show and great new young actors with Jesse and Josh and the girls!