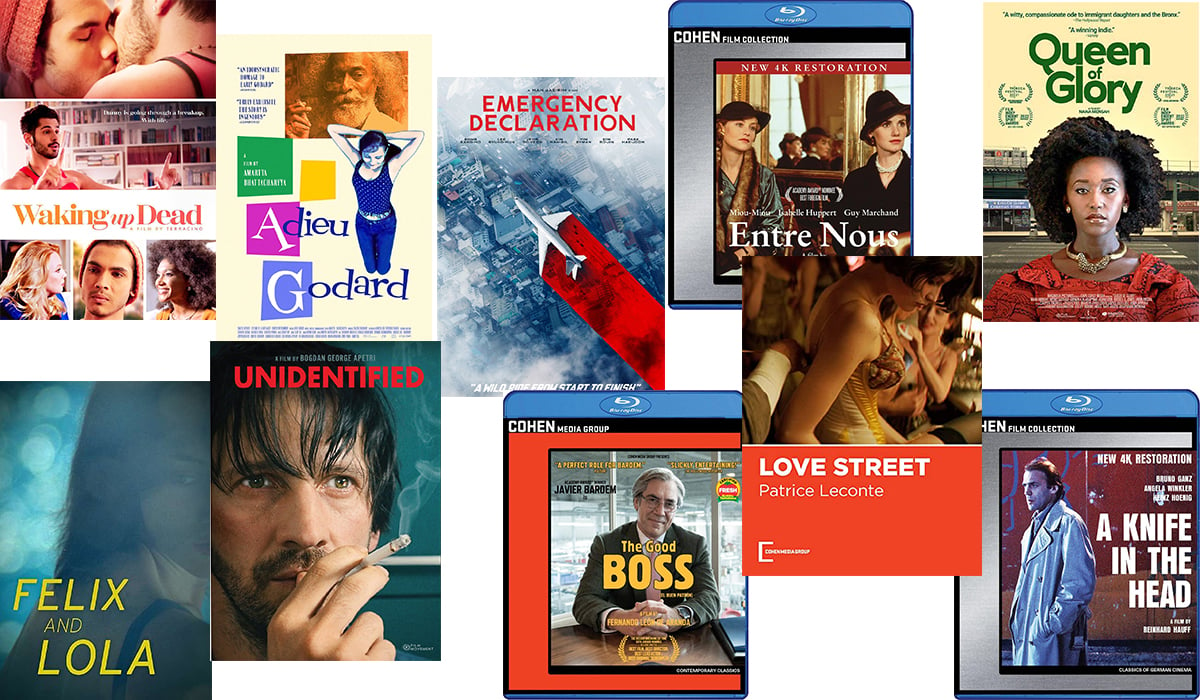 WAKING UP DEAD
Breaking Glass Pictures
Available on DVD & VOD Now
Actor Danny Maldonado, who was once about to conquer Hollywood. but now, just a few years later, his career has flatlined. When he receives a call in to audition for the lead role in the most talked-about new series in Hollywood, Danny vows to clean up his act, but is it too late?

THE GOOD BOSS
Cohen Media Group
Available on Blu-ray & DVD Now
Academy Award Winner Javier Bardem stars as Blanco, proprietor of Básculas Blanco, a Spanish company producing industrial scales in a provincial Spanish town, which awaits the imminent visit from a committee that will decide if they merit a local Business Excellence award: everything has to be perfect when the time comes. Working against the clock, Blanco pulls out all the stops to address and resolve issues with his employees, crossing every imaginable line in the process.

FELIX AND LOLA
Cohen Media Group
Available on Blu-ray & DVD Now
Bumper car operator Felix falls in love with Lola one night as she rides the cars round and round, alone. He’s touched by the sadness in her eyes. When she vanishes, he discovers that she’s tied to a mysterious past – a past that he will have to confront. How far will he go to set her free?

LOVE STREET
Cohen Media Group
Available on Blu-ray & DVD Now
In 1945 Paris, the Oriental Palace brothel is about to be closed down. Marion (Laetitia Casta) is one of the Palace’s prostitutes, but she dreams of a singing career. Petit Louis (Patrick Timsit) was raised in brothels and is the Palace’s handyman. He is madly in love with Marion, but knows she will never be his, so he tries to make her dreams of another life come true.

EMERGENCY DECLARATION
Well Go USA Entertainment
Available on Digital, Blu-ray & DVD Now
While investigating a terroristic threat that goes viral online, Korean authorities discover that a suspect has recently boarded an international flight bound for the United States. When a healthy passenger on the same flight suddenly dies a gruesome death of unknown cause, panic erupts both in-flight and on the ground. With steadily decreasing fuel and international refusals to offer aid, the captain and crew will be forced to take unprecedented emergency measures in an attempt to save the lives of their passengers.

UNIDENTIFIED
Film Movement
Available on DVD/Digital Now
Despite growing debts and a complicated personal life, police detective Florin Lespas is determined to crack a mysterious arson case that has been assigned to one of his colleagues and remains unsolved. Ordered to stand down by his boss, he continues his off-the-record investigation, relentlessly pursuing a suspect he insists must be guilty and resorting to increasingly desperate measures to find justice.

A KNIFE IN THE HEAD
Cohen Film Collection
Available on Blu-ray & DVD Now
An innocent bystander who survives a gunshot to the head by the police during a raid on a group of revolutionaries. In order to justify the shooting, the police claim he is a dangerous radical who attacked a policeman. The leftist revolutionaries in turn claim him as a hero and victim of police brutality. As Hoffman struggles to recover from the trauma to his brain and memory loss, he must try to piece together what really happened that fateful night.

ENTRE NOUS
Cohen Film Collection
Available on Blu-ray & DVD Now
in 1942, Lena, a young Jewish woman in an internment camp run by the Vichy authorities accepts a proposal of marriage by one of the camp workers in the hopes of escaping deportation to Nazi Germany. They escape on foot, crossing the Alps to Italy, and settle in Lyon after the war to raise two daughters. At a school event she meets another mother, Madeleine, a charismatic artist, and the two form a special bond that offers the promise of escaping the mundane domestic life they’ve grown dissatisfied with.

ADIEU GODARD
Film Movement
Available on DVD/Digital Now
Ananda is a dirty old man who lives in a small Indian village and spends most of his time watching pornography with his friends. One day upon returning from the store, he discovers that the DVD he accidentally rents is a Godard film. Intrigued by what he sees, Ananda begins watching all of the auteur’s greatest works, which inspires him to organize a Godard film festival in his town.

QUEEN OF GLORY
Film Movement
Available on DVD/Digital Now
Sarah Obeng, a doctoral student at Columbia, is weeks away from following her married boyfriend to Ohio when her mother suddenly passes away. Her inheritance? King of Glory, a small Christian bookstore serving the Ghanaian immigrant community in the Bronx. Tasked with arranging her mother’s funeral according to her family’s traditional expectations, Sarah simultaneously navigates her plans to relocate and the return of her estranged father, all while grappling with the bookstore. Sara must face her new responsibilities while figuring out how to remain true to herself..