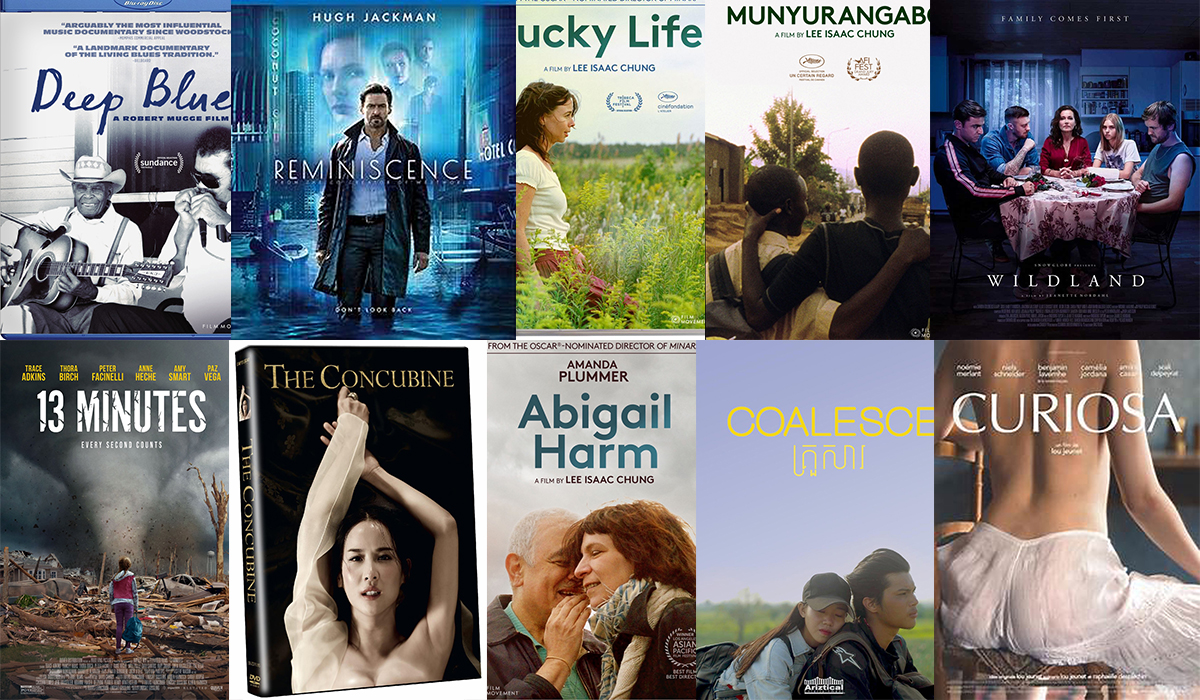 13 MINUTES
Highland Film Group/Quiver Distribution
In Theaters Now
The day starts out as usual for residents in the small Heartland town of Minninnewah. It’s springtime and big storms are just part of life. Nothing to get worked up about…until they are. Inhabitants will have just 13 Minutes to get to shelter before the largest tornado on record ravages the town, leaving the inhabitants searching for their loved ones and fighting for their lives. In the wake of total devastation, four families must overcome their differences and find strength in themselves and each other in order to survive.

CURIOSA
Film Movement
Available on DVD/Digital Now
Paris 1895. Pierre Louys, a young poet on the verge of fame, is madly in love with Marie de Heredia. Despite her mutual feelings for Pierre, Marie agrees to a marriage of convenience with his friend, Henri de Régnier. Driven by jealousy and regret, she returns to Pierre and enters a world of passion and desire played out in front of his camera

ABIGAIL HARM
Film Movement
Available on DVD Now
Abigail Harm reads books to the blind and lives alone on the outskirts of the city. Keeping her eyes turned away from everyone, she secretly watches, listens and hopes. One day, Abigail recalls an old story about a woodcutter who saves the life of a mystical deer and is granted his wish for a companion. Before long, this tale seems to come alive in Abigail’s own lonely world when a strange visitor mysteriously appears in her apartment.

DEEP BLUES
Film Movement Classics
Available on Blu-ray/DVD Now
In 1990, commissioned by Dave Stewart of Eurythmics, veteran music film director Robert Mugge and renowned music scholar Robert Palmer ventured deep into the heart of the North Mississippi Hill Country and Mississippi Delta to seek out the best rural blues acts currently working. Starting on Beale Street in Memphis, they headed south to the juke joints, lounges, front porches, and parlors of Holly Springs, Greenville, Clarksdale, Bentonia, and Lexington. Along the way, they visited celebrated landmarks and documented talented artists cut off from the mainstream of the recording industry.

LUCKY LIFE
Film Movement
Available on DVD Now
a group of friends travels to the beach in hopes of encouraging Jason, who has been diagnosed with terminal cancer. The journey is rooted in nostalgia and the desire for a meaningful farewell, although the friends avoid discussing Jason’s illness. Some time later, as Mark and Karen plan to have a child, the beach trip lingers as a haunting memory.

REMINISCENCE
Warner Bros. Home Entertainment
Available on 4K, Blu-ray and DVD Now
Nick Bannister, a private investigator of the mind, navigates the past by helping his clients access lost memories. Living on the fringes of the sunken Miami coast, his life is forever changed when he takes on a new client, Mae. A simple matter of lost and found becomes a dangerous obsession. As Bannister fights to find the truth about Mae’s disappearance, he uncovers a violent conspiracy and must ultimately answer the question: how far would you go to hold on to the ones you love?

COALESCE
Ariztical Entertainment
On Digital VOD December 14
In the capital of Cambodia, three young people, three perspectives, three routes. Songsa, an introverted teenager, is sent to the capital by his family to sell clothes in a tuk-tuk. Phearum goes into debt to buy a taxi and confronts the unexpected. Thy dives into the nightlife and dreams of joining a biker crew. Three ways of living, three destinies, three looks. Coalesce draws a portrait of a youth that faces a fast-changing world.

WILDLAND
Film Movement
Available on DVD/Digital Now
Following a car crash that kills her mother, seventeen-year-old Ida moves in with her estranged aunt Bodil and three male cousins.. The home is filled with tenderness and care, but outside its walls, the family leads a violent criminal life. When and accidental murder fractures their fragile loyalties to each other, tension builds as love and violence become impossible to separate.

MUNYURANGABO
Film Movement
Available on DVD Now
After stealing a machete from a market in Kigali, Munyurangabo and his friend, Sangwa, leave the city on a journey tied to their pasts. Munyurangabo wants justice for his parents who were killed in the Rwandan genocide, and Sangwa wants to visit the home he deserted years ago. Their friendship, however, is tested when Sangwa’s parents disapprove of Munyurangabo, warning that “Hutus and Tutsis are supposed to be enemies.”

THE CONCUBINE
Capelight Pictures
Available on DVD Now
Living a torturous life of poverty and barely able to survive, Hwa-yeon (Jo Yeo-jeong) decides to offer herself as one of the king’s concubines. Once inside the royal palace, two men are immediately seized by the woman — the Grand Prince Seong-won (Kim Dong-wuk), a megalomaniacal ruler drunk with power and lust, and Kwon-yoo (Kim Min-joon), who has everything to lose if his desire for Hwa-yeon is exposed. As political intrigue begins to infiltrate this love triangle, the palace is revealed as hell-like space of passion and obsession from which any of these characters will be lucky to emerge from still alive.