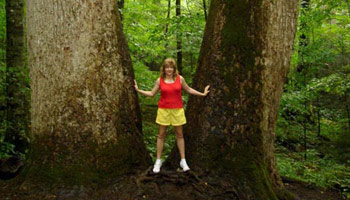 Dear EarthTalk: How much “old growth” forest is left in the United States and is it all protected from logging at this point? – John Foye

As crazy as it sounds, no one really knows how much old growth is left in America’s forested regions, mainly because various agencies and scientists have different ideas about how to define the term. Generally speaking, “old growth” refers to forests containing trees often hundreds, sometimes thousands, of years old. But even when there is agreement on a specific definition, differences in the methods used to inventory remaining stands of old growth forest can produce major discrepancies. Or so complains the National Commission on Science for Sustainable Forestry (NCSSF) in its recent report, “Beyond Old Growth: Older Forests in a Changing World.”

In 1991, for example, the U.S. Forest Service and the nonprofit Wilderness Society each released its own inventory of old-growth forests in the Pacific Northwest and northern California. They both used the Forest Service’s definition based on the number, age and density of large trees per acre, the characteristics of the forest canopy, the number of dead standing trees and fallen logs and other criteria. However, because each agency used different remote sensing techniques to glean data, the Forest Service came up with 4.3 million acres of old-growth and the Wilderness Society found only two million acres.

The NCSSF also studied the data, and they concluded that 3.5 million acres (or six percent) of the region’s 56.8 million acres of forest qualified as old growth—that is, largely trees over 30 inches in diameter with complex forest canopies. By broadening the definition to include older forest with medium-diameter trees and both simple and complex canopies, NCSSF said their figure would go up substantially.

In other parts of the country, less than one percent of Northeast forest is old growth, though mature forests that will become old growth in a few decades are more abundant. The Southeast has even less acreage—a 1993 inventory found about 425 old growth sites across the region, equaling only a half a percent of total forest area. The Southwest has only a few scattered pockets of old-growth (mostly Ponderosa Pine), but for the most part is not known for its age-old trees. Old-growth is even scarcer in the Great Lakes.

It is hard to say whether the remaining pockets of scattered old-growth in areas besides the Pacific Northwest will remain protected, but environmentalists are working hard to save what they can in northern California, Oregon and Washington. The outgoing Bush administration recently announced plans to increase logging across Oregon’s remaining old-growth reserves by some 700 percent, in effect overturning the landmark Northwest Forest Plan of 1994 that set aside most of the region’s remaining old growth as habitat for the endangered spotted owl.

Protecting remaining old-growth is important for many reasons. “These areas provide some of the cleanest drinking water in the world, critical salmon and wildlife habitat, world-class recreational opportunities and critical carbon storage in our fight against global warming,” says Jonathan Jelen of the nonprofit Oregon Wild, adding that as much as 20 percent of the emissions related to global warming can be attributed to deforestation and poor forest management. “A growing body of evidence is showing the critical role that forests—and old-growth forests in particular—can play in mitigating climate change.”