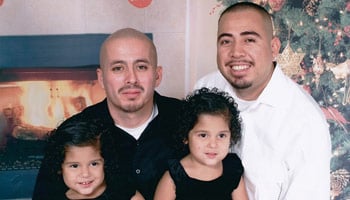 LGBT families respond to recent homophobic comments against the right for same-sex couples to marry and adopt.

In March Mexican singer Paquita la del Barrio stirred controversy worldwide with her homophobic comments in an interview promoting her Los Angeles concert. Paquita, who sings about women empowerment and sexist men, shocked audiences everywhere by saying that she disapproves of Mexico City’s new law granting gay and lesbian couples the right to adopt and marry. “It’s not in my taste,” Paquita said an in interview, “it’s better that the child die instead of that life for the little creatures.”

Raymond and Byron are much like any other typical Latino family living in Southern California. The couple met seven years ago in Los Angeles while Raymond was visiting his family from Chicago. It was love at first site and two days later, with much apprehension from his mother as he is the youngest of five children, Byron decided to move in with Raymond in Chicago.

“When I met Byron, I knew he was the one. I knew he was special. He was totally honest, something that is really hard to find,” says Raymond, a product of Catholic schools and the city of La Puente. “I knew I always wanted kids, I just didn’t know how, when, and with whom.”

About a year later, Raymond’s coworkers hosted an engagement party for Raymond and Byron. But the couple’s plans quickly took an unexpected turn when Raymond was diagnosed with multiple myeloma, a deadly form of cancer. The doctors didn’t give Raymond much time, so they decided to move back to California to be closer to their families.

When Raymond and Byron moved to California they decided to get registered as domestic partners but didn’t tell their friends and families. “Our families were really mad at us,” says Byron. “My mother was upset; she said ‘Se fueron a registrarse sin invitarnos.’ She wanted to be part of that significant day. It was important to them as well.”

In May 2008, after the California’s Supreme Court decision allowing same-sex couples to marry came down, Raymond and Byron decided to get married to protect themselves should something happen to Raymond, who was suffering from cancer. A short while after adopting their daughters, Jacqueline and Jasmine, they exchanged vows during a ceremony filled with more than 100 friends and family members. But the right for same-sex couples to marry did not stick in California, and instead, on November 4, 2008, Proposition 8 stripped LGBT Californians from the freedom to marry.

Since Raymond’s condition has become much better, both have become leading spokespeople on the importance of supporting family rights for same-sex couples. Their work with UCLA’s 13lovestories project has landed them interviews with el Show de Cristina and Primer Impacto.

There are hundreds of families much like the Moya family throughout the United States. In 2007, Census data collected showed that there are at least 270,000 children being raised by same-sex couples, not including single lesbian, gay or transgender parents. The Williams Institute at UCLA expects these numbers to be underreported, and believes that there are a lot more children being raised by gay and lesbian couples.

Since making the homophobic statement, Paquita asked the LGBT community for forgiveness in an exclusive concert and press conference, saying, “I was born to love all human beings. I have nothing against the gay community. I also never spoke badly of them. I’ve never been against you.”

Paquita’s comments are problematic because they often raise questions about gay and lesbian parents’ ability to raise children even though the American Academy of Pediatrics and many other studies confirm that “children who grow up with one or two gay and/or lesbian parents fare as well in emotional, cognitive, social, sexual functioning as do children whose parents are heterosexual.”

Raymond and Byron continue educating people by sharing their story in Spanish and English media and talking about the importance of supporting the right for same-sex couples to marry and adopt. They also continue encouraging others to join them in their efforts.

“We want to educate people that have not been exposed to our families,” says Byron. “We think it is important to get involved and talk to other people about equal rights for all.”

Currently, Equality California is going door to door in neighborhoods throughout California talking to people in English and Spanish about the importance of supporting the right for same-sex couples to marry. To learn more about the campaign or to volunteer please visit: www.eqca.org/site/volunteer