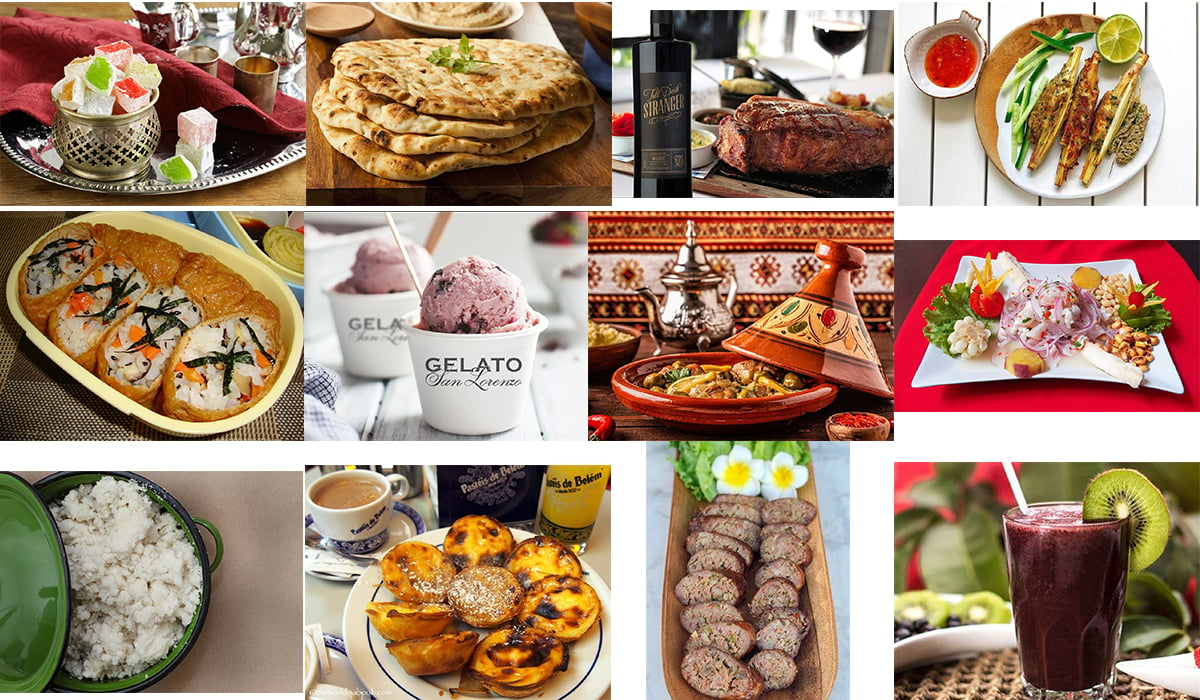 Exploring new and fine cuisine is such an important part of the travel experience. Most countries in the world have at least one signature drink or dish, but there are some that are so spectacular that I find myself thinking about them when I am back home. The following are my favorite specialties from 11 different countries.

1 – PORTUGAL, PASTEIS DE BELEM
the famous Portuguese egg tart
Originally created by monks at the Jerónimos Monastery in the 1700s in Belem Portugal these tarts really are something special. Especially if you don’t like things that are too sweet, these are so delicious because you can actually taste all the flavors and not just sugar. They are perfectly flaky with a creamy, buttery center with notes of vanilla. Definitely worth the 20 minute drive from central Lisbon!

2 – ARGENTINA, A GLASS OF MALBEC AND A STEAK
While you can certainly get a glass of red wine and a steak anywhere, it’s different in Argentina. Perhaps it is because Argentina takes both wine and steak very seriously. The marriage of the two is more than just something tasty. It is an essential part of their culture.

3 – BRAZIL, ACAI
Every time I go to Brazil, one of the first things I get is an acai from a local juice shop. It looks like a deep purple-black sludge, but is sweet with a mild tang. It is believed to have more antioxidant content than cranberry, raspberry, blackberry, strawberry, or blueberry. In fact, consuming acai might also reduce swelling, lower blood sugar levels, and stimulate the immune system.

4 – PERÚ, CEVICHE
Peruvian cuisine has become such a big player in the world, with Lima housing several of the best restaurants on Earth. While you can get every type of cuisine in Peru, and done well, the major stand out is ceviche, where it originated! I always go for the typical ceviche that Perú is known for which is trout, usually red onion, and hominy (corn).

5 – ITALY, GELATO
There are so many incredible foods that come out of Italy, and while the mozzarella is everything, and obviously the pastas are perfection, gelato is simply next level. If you have never had gelato in Italy, imagine the best ice cream you’ve ever tasted, where you can really taste the intricacies of the flavors, and it is about five times as smooth and creamy. That’s gelato.

6 – MOROCCO, TAGINE
If you spend any time in Morocco at all, you are bound to have at least one tagine, and maybe one a day. This incredibly common dish in Morocco is made within a kind of clay shallow bowl with a triangular ceramic lid that goes into the oven and kind of stews whatever is placed inside it. My go-to tagine is chicken with olives, potatoes, vegetables, and lemon. I love it.

7 – JAPAN, BEAN CURD
One of the things people love about visiting Japan, is enjoying the incredible attention to detail in the cuisine. Nowhere do I see this more than in the use of bean curd. It can take a lot of shapes, but my favorite is when it is made into a type of fabric, for lack of better words, where one can place herbs, vegetables, meat, etc. and steamed to perfection within the bean curd.

8 – TURKEY, TURKISH DELIGHT
I first heard about Turkish delight when I read “The Lion, the Witch, and the Wardrobe” by C. S. Lewis. So when I went to turkey, I was dying to try it. Turns out I love it. Essentially Turkish delight is a gelatinous cubes that are mildly sweet and taste like roses.

9 – LAOS, STUFFED LEMONGRASS AND LAO SAUSAGE
To make stuffed lemongrass” (Ua Si Khai), seasoned ground chicken or pork is carefully packed into the bulbous part of a lemongrass stalk which has been serrated lengthwise to create a “cage” or a net that holds the chicken in place. The stuffed lemongrass is then steamed, dipped in egg yoke, and deep-fried until golden brown. On a past Zoom Vacations tour to Laos, we had a cooking party where we learned to make this dish. It sounds difficult, but we nailed it.

LAO SAUSAGE, also known as Laotian sausage or sai oua, is made from coarsely chopped fatty pork seasoned with lemongrass, galangal, kaffir lime leaves, shallots, cilantro, chillies, garlic, salt, sticky rice and fish sauce. It is probably the best sausage I have ever had, which I think is mainly due to the lemongrass and kaffir lime leaves. It doesn’t taste greasy or fatty, and the herbs they use give it this uncommon “fresh” dimension for sausage. You have got to try this if you are coming to Laos.

10 – INDIAN, NAAN
When I travel to India, I throw notions of diets out the window, because I just want to enjoy all the great food—especially the naan. ALL the naan! Naan is meant to be pulled apart and held in hand for soaking up sauces and curries. It is believed that the origin of naan dates back to ancient times, where it was first introduced alongside the new cooking method of the tandoor by the Delhi Sultans. Let’s be honest, the tandoor was a great invention.

11- SOUTH AFRICA, PAP
Pap is a kind of porridge in South Africa made from maize meal and can be cooked to be runny, soft or stiff. It is perhaps most similar to grits, although less gritty. In terms of having it with meals, you would treat it the same way one would treat mashed potatoes, rice, or couscous.

f you are traveling to any of these destinations, try these local delicacies, and let me know what you think!

Bryan Herb is co-owner of Zoom Vacations®,
a US company that creates stylish international private events and gay group vacations to the world’s hottest destinations. Learn more about them at www.zoomvacations.com or call 773.772.9666.
Instagram.com/bryanherb
Facebook.com/bryanherb