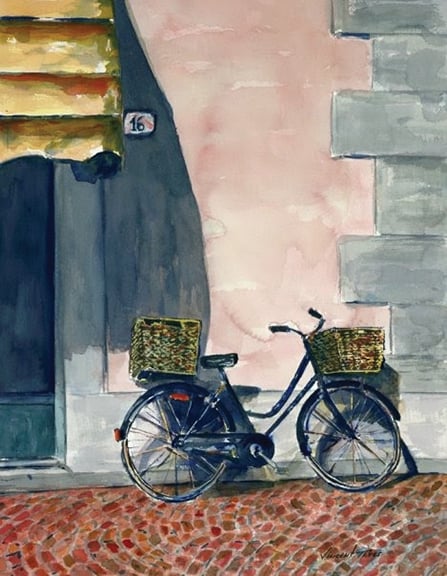 Vincent Takas is an accomplished Southern California watercolor painter who attributes his success to 25 years of employee development classes with the Walt Disney Company.

Mr. Takas teaches watercolor painting on cruise ships around the world on the Queen Mary 2, Queen Victoria, and Queen Elizabeth. Recent affiliation with the American Cruise Lines has presented him the opportunity to teach on the rivers of America as well.

“I enjoy finding emotions in simple things such asa bicycle in an European village or a clothesline spanning between two buildings and then I attempt to paint a timeless quality into the painting so that the image could have been painted last week or last century.”

“There are times when large chunks of time can pass while painting in my studio but it will seem like only moments, and when the focus of those moments is ended, I am sure that during those moments, I am in touch with a greater creator.”

Mr. Takas paints images that are part of our everyday life. Cityscapes, bicycles, and iconic landmarks make up much of his body of work. His style is loose and natural with staccato brush strokes that allows the viewer a ‘connect the dots’ approach to experiencing his paintings. Most of Vincent’s work have vivid primary colors which he accents with their complementary colors to create an instant contrast.

Mr. Takas is a past President of the Glendale Art Association. He also conducts demonstrations and workshops with localart associations.