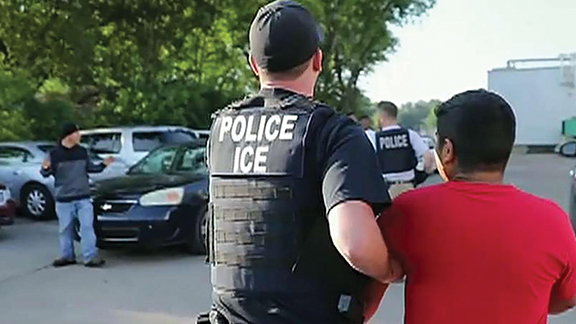 Wednesday, August 6, Stefany, a high school senior in Morton, MS, got a panicked call from her aunt. They were found by ICE agents hiding in Stefany’s father’s car with Stefany’s three-year-old younger sister, Ingrid. Two hours later, Ingrid was finally released to another aunt. Stefany says her little sister keeps asking, “Daddy, where is Daddy?” Stefany, the oldest of six siblings, also has to care for her six-year-old, autistic brother, Nery, who hasn’t eaten since their father was taken.

Later, video of 11-year-old Magdalena Gomez Gregorio of Forest, MS tearfully begging the government to return her father to her went viral. “I need my dad,” She said, voice trembling, “My dad didn’t do nothing. He’s not a criminal.”

Stefany’s aunt and father and Magdelena’s father were only three of the nearly 700 people detained by ICE.

ICE officials swept seven food processing facilities in Mississippi for suspected undocumented immigrants, ultimately arresting approximately 680 people. It is believed to have been the biggest single-day one-state immigration sweep in U.S. history. In a touch of irony, or perhaps a total lack of self-awareness, the raids happened just as President Trump was headed to El Paso to visit the victims of a mass shooter aiming to stop an “invasion” of Mexicans.

ICE officials explained that they had taken the following steps to prepare for the raids: release parents of young children (particularly nursing or pregnant parents), allow detainees a phone call, notify schools once the raids had already begun. However, they did not notify child protective services (CPS) nor did they ensure that each child would have a guardian when they returned home from what was, for many Mississippi children, the first day of school. Volunteers at a local gym near where one of the raids took place, turned the gym into a shelter for children who found themselves locked out of their houses and without parents. According to NBC, “Because of the lack of preparation for the impact of missing parents, local authorities had to improvise. One school district said it instructed bus drivers to make sure they saw a parent or a guardian at the bus stop before dropping off a child. In that district, children without parents at home were taken back to school to spend the night.”

Although about 270 parents were quickly released because they had young children and no one to care for them, ABC’s Serena Marshall said, “This kind of begs the question, why do the raids in the first place if you’re not going to make sure that there is proper protocol in place to handle these children, many of who [sic] are American citizens.”

When asked why they didn’t take further precautions, an ICE official said, “We are a law enforcement agency, not a social services agency.” Elaborating that notifying school ahead of the raids might have tipped off parents to the imminent raids.

Questioned about the raids by reporters on his way to two New York fundraisers, President Trump said, “this serves as a very good deterrent…  when people see what they saw yesterday… they’ll know that they’re not staying here… if they come into the United States illegally… they’re going to be brought out.”

If you are worried about your children in the event that you are detained in an immigration raid, NBC advises you appoint a stand-by guardian or file power-of-attorney forms. In the even you are detained, do not speak to ICE officials without a lawyer present.

If you are in need of an immigration attorney, please contact our office at (323) 857-0034 or our managing attorney at ally@americanvisas.net.