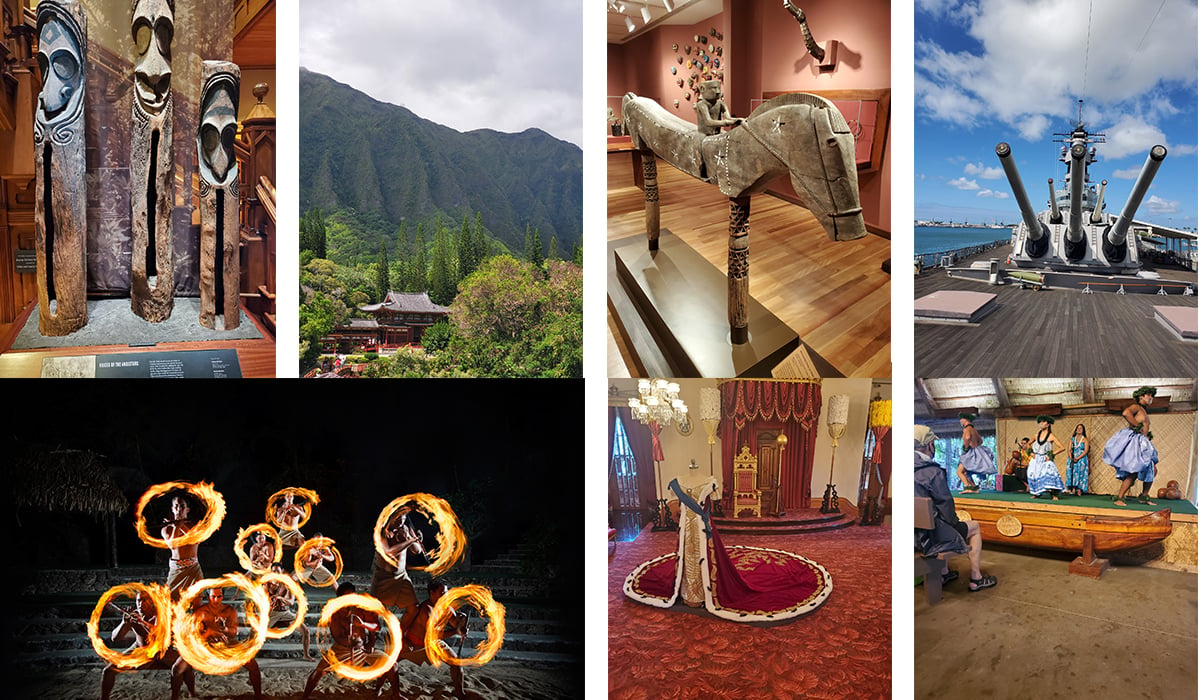 By: Scott Smith and Sandra Wells

Hawaii has been at or near the top of the list of the best states for COVID deaths per 100,000 population from the start of the pandemic. As of August 25, 2021, it was No. 1 with 40 (compared with California’s 165, while New Jersey had the worst record with 301). Physicians advised on the state’s decisions, starting with sealing off entry from anywhere right from the start unless visitors went into a two-week quarantine. Starting in July 2021, the vaccinated or those who qualified with a specific test could be exempted if they set up an account on the state’s Safe Travel site and received a QR Code before boarding a plane (https://travel.hawaii.gov/#/welcome). The four days we spent in Honolulu and up the coast in Laie in August proved that paradise is worth the hassle (the best resource on things to do: https://www.gohawaii.com/). One other tip: no matter the weather report, always bring a sturdy umbrella, a poncho, and waterproof shoes.

Experience a Day in Polynesia
Contrary to what cynics might think, the Polynesian Cultural Center https://www.polynesia.com/ is not a Disneyesque, touristy version of a traveler’s fantasy, it is one of the most authentic cultural institutions you could ever visit. Located 90 min. up the coast from Honolulu (take the PCC van nearest to where you stay for a $33 roundtrip), it is well worth the $140 we each paid for the Exclusive Gateway Buffet Package (there were plenty of delicious choices for any diet). This gave us entry to recreated villages staffed by students at a local college from Samoa, Tahiti, Fiji, Tonga, New Zealand, and Hawaii, where you could watch and even participate in the music and dancing, learn about daily life in the islands past and present, make crafts, sample foods, watch a traditional wedding, take a canoe ride, and learn some of the native languages (which sound like spoken poetry). You can’t possibly experience all of it in a single visit.

But as educational and fun as the villages were, the highlight is the 90-minute “HA! Breath of Life” stage show (which refers to the divine breath that creates a living soul). Be aware that photos are not allowed (the one accompanying this article is courtesy of the Polynesian Cultural Center). It is important to read the brief storyline in advance because the entire program is in the native languages. The show leaves one uplifted by a common culture that puts the highest value on taking care of everyone and appreciating their blessings, no matter what adversity they go through. It is a unique celebration of a joyous approach to life we should all embrace. But wait until the very end, when the Samoans perform the fireknife, twirling and tossing a flaming hooked weapon that has to be seen to be believed. We say this as long-time reviewers of shows in L.A., Las Vegas, New York: this was the most powerful, moving performance we have ever had the privilege to experience.

Art, Science, History, and Nature
For a regional art museum, the Honolulu Museum of Art https://honolulumuseum.org/ has a very impressive collection. Overall, it has more than 50,000 works going back 5,000 years to Egypt. It’s Asian group constitutes one of the strongest of any U.S. museum. Beautifully presented in a handful of two-story buildings around large themed gardens, we particularly loved the large Indonesian wood carvings, the imaginative metalwork from Africa, and the impressionist paintings.

The Bishop Museum https://www.bishopmuseum.org/ is world-famous for two things. One is its immersive planetarium, which was unfortunately temporarily closed. But its collection of Hawaiian artifacts is unrivalled, providing a panoramic view of the islands’ history and culture, from herbal medicines to bird-feather royal cloaks. There is also an informative section on other Pacific islands and an exhibition on why racist theories have no basis in science. In another building is the Science Discovery center, where kids of any age can have interactive experiences on everything from volcanoes to deep sea exploration.

Iolani Palace https://www.iolanipalace.org/ was a big surprise because we knew nothing about the history of Hawaii’s royalty. The building itself is gorgeous inside and was constructed on an ancient royal burial site, which had been the Kingdom of Hawaii’s government center since 1845. King David Kalakaua, the first king to travel the world, completed the new residence in 1882. But just 11 years later, the monarchy was overthrown by a private army sponsored by U.S. business interests and Queen Lili’uokalani was imprisoned in one room. It became the capitol of the provisional, then territorial, and finally state government until 1969 (Hawaii became a state in 1959).

The Kaneohe District is a huge, lush region along the coastal road going northwards from Honolulu, a favorite for movies set in rainforests. It includes the 400-acre H’omaluhia Botanical Gardens and the Valley of the Temples, most notable for the Byodo-in Buddhist Temple. It can be reached in an hour from downtown by the 65 bus line.

Remember Pearl Harbor: The Original 9/11
Americans know at least the headlines of World War II in Europe: D-Day, Hitler, the Holocaust, and that the Soviet Union fought on the Eastern front, enabling it to establish Communist regimes in many countries after the war. Few seem to know much about the War in the Pacific, except that it started with the unprovoked attack by Japan on the US. fleet at Pearl Harbor and ended with the atomic bombs dropped on Hiroshima and Nagasaki. In between, it was exceptionally brutal, as Clint Eastwood’s twin films “Flags of Our Fathers” and “Letters from Iwo Jima” depicted. Even the Nazis were nicer to prisoners of war, since they wanted German POWs treated well: on the Western front, only 5% of the captured Allies died, compared with a quarter of Japanese prisoners

The attack came on Dec. 7, 1941, resulting in the deaths of 2,403 Americans and wounding of 1,178, with 188 U.S. aircraft destroyed and four battleships sunk, as well as damage to four others (eight other ships were sunk or damaged). Fortunately, three aircraft carriers were away at the time, becoming the center of the counterattack. You should spend a full day at the 17-acre Pearl Harbor Visitor Center https://www.nps.gov/perl/planyourvisit/basicinfo.htm, including watching an introductory film outdoors, visiting the aviation museum, and taking an audio tour of a submarine (go early because it takes time to check in your bag for security reasons and to get around). The memorial to the sunken, but partially visible, Battleship Arizona, is a somber and inspiring site https://www.nps.gov/perl/learn/historyculture/battleship-row.htm, is only accessible by boat, so you need to reserve a time weeks in advance:
https://www.recreation.gov/ticket/233338/ticket/16

We spent a couple of hours on the Battleship Missouri, https://ussmissouri.org/# and a 35-min. guided tour is essential to fully appreciate Mighty Mo (be sure to also walk through the living and operational quarters, three football fields long). This was the ship on which the surrender of Japan was signed Sept. 2, 1945 (it was launched in Jan. 1944 and played an important role in the war’s final operations). There is a huge photo of that event on the Surrender Deck, showing Gen. Douglas MacArthur and the other military leaders from the major countries involved (another shows a kamikaze plane as it is about to hit Mo).

When you leave Pearl Harbor, you will begin to understand what it really means when you say “thank you for your service” (only 1.4 million Americans are on active service and just 19 million are veterans)