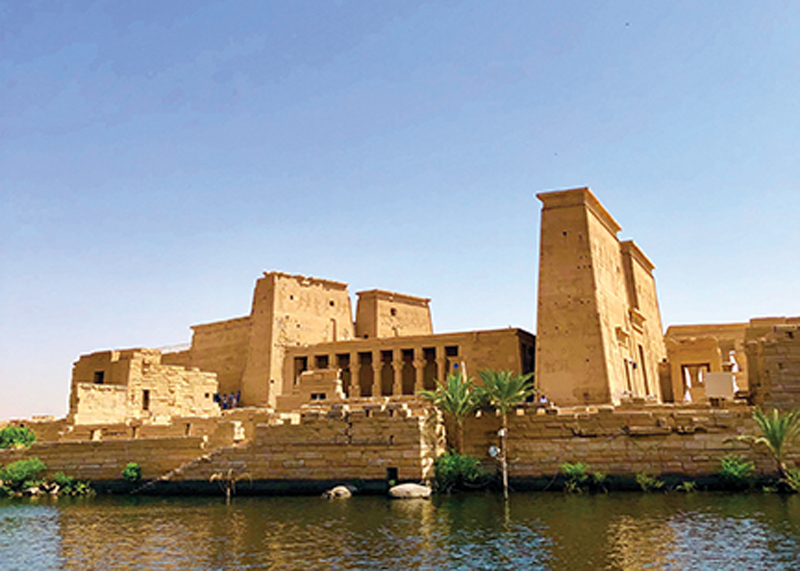 When people ask me what our most popular destination is that we offer, they are always surprised by the answer. For the past three years our trip that sells out every time is our trip to Egypt.  In fact, two years ago, our trip sold out within two days. So, we added another trip to Egypt back-to-back with the first. That sold out within a week. With that, we added another trip, and that sold out as well. So yeah, apparently there are a lot of gay people who really want to go to Egypt.

Having just been there with the group, I was struck by what the appeal is to go to Egypt. I have been able to travel to Egypt a few times, but seeing it through the eyes of people experiencing it for the first time is really special. In Egypt you have the opportunity to see unbelievable architecture, carvings, and other ancient artifacts that simply blow your mind.

For instance, you can go to queen Nefertari’s tomb in the valley of the Queens, and the colors are so rich and vibrant that it looks like it was painted last week, but it is about 3500 years old. Then, you go to a tomb not far from the pyramids of Giza, and it is has even more intricate carvings with some of the paint still intact as well, and this is 4500 years old.

Of course, the pyramids of Giza themselves are just spectacular. They are visually stunning, and what you learn while you are there is that they are absolutely perfect prisms. To this day, no one knows how they were built.  Scientists have tried a number of theories, and all of them have been debunked. The Great Pyramid of Giza is massive, and not only is it the biggest and oldest of the three pyramids in the Giza pyramid complex, but it is the oldest of the seven ancient wonders of the world, and the only one that is still visibly intact. Its present height is 455.4 ft, and each base side is 755.9 ft long.

The Egyptian museum has also been a must-see for years, with artifacts even older than the pyramids. What is exciting is that they have been building a new state-of-the-art museum that is set to open in April, 2020. With a price tag of $1 billion, the museum will restore and house some of Egypt’s most precious relics.

So, the reasons to visit Egypt abound.  That being said, some LGBT travelers may not wish to visit Egypt due to its political climate.  While Egyptian law does not explicitly criminalize homosexuality, it does have provisions that criminalize any behavior that is considered to be immoral or offensive to the teachings or thoughts of a recognized religious leader. While I understand that some people may want to boycott visiting Egypt because of this, I think boycotting is a complicated issue, and not one that I usually advise when aimed at a particular country.  For instance, there are gay and gay-friendly businesses and independent tour guides, etc. who need LGBT support.  Plus, our travelers act as ambassadors, giving friendly faces to the idea of homosexuality.  I could go on, but this is it is a nutshell.

Several of my travelers had Scruff and Grinder loaded on their phones, and everyone commented on the fact that there are many many gay people living in Egypt, and very active on these apps.  They also mentioned how nice Egyptian people were to our group in general. Of course we use the best hotels and Nile boat in Egypt, so it is not surprising that the local staff members are incredibly sophisticated, warm, embracing, and gay friendly. However, even outside of the hotels everyone with whom we interacted seemed totally cool, and that the fact that we were gay was not an issue at all.

So the good news is that it feels incredibly safe to travel to Egypt. The good news, is also the bad news because there are much more tourists than there were a few years ago. Locations such as Luxor, Giza, and Egyptian museum are pretty packed with fellow tourists. However, I certainly would not let that dissuade me from visiting Egypt.  There were still moments on our tour where we were the only ones in certain tombs and temples.  It was magical.