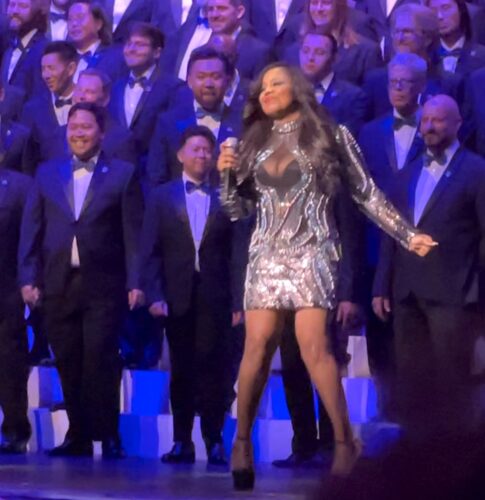 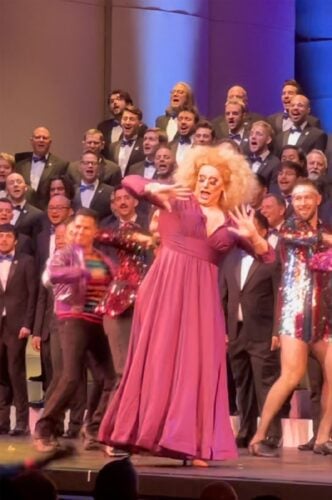 The Gay Men’s Chorus of Los Angeles performed “A Motown Holiday” with guest artist SHANICE and Thomas Hobson, Frank Lawson, Stu James and Phillip J. Lewis as The Motown Guys. The concert was held at the Alex Theatre in Glendale, California and played to a sold-out crowd on December 17 & 18, 2022. There must have been a couple hundred singers, dancers and accompanists that made the evening special.

The GMCLA performed the greatest x-mas music selections including Sleigh Ride, Frosty the Snowman, Rudolph the Red-Nosed Reindeer, White Christmas, 8 Days of Hanukkah, and others. They also performed other great songs like Money, and I’m Coming Out. It was all spectacular. SHANICE was flawless singing I love your Smile with the Chorus as backup to this 1993 Grammy-nominated hit.

“Choral music contributes to a sense of community and wellness, and that’s exactly what the Gay Men’s Chorus of Los Angeles accomplishes. The love and support that comes from this Motown Holiday Concert is what many members of the LGBTQ+ Community need this time of year, which can be particularly difficult for those struggling with sexuality, gender identity, and expression and dealing with their families and the relationships in their lives,” says Dr. Jerry Abraham, GMCLA Board Member.

The GMCLA was founded in 1979 when a small group of men opened the doors to a room at the Plummer Park Community Center in Los Angeles (now West Hollywood), waiting and wondering if anybody would show up. They had posted flyers around the neighborhood announcing the formation of a new gay chorus and this night was to be its first rehearsal. To their great surprise, 99 men showed up and a chorus was born.

While public understanding of gay life has evolved much since 1979, there is still fierce resistance to lasting change by opponents to LGBT equality. And the road to today has not always been easy. Through the height of the AIDS crisis, the Chorus lost over 150 members. Only a few original members remain. As a result, GMCLA has a deep history of service within the LGBT community, singing at countless memorials, making, and commissioning music that helps the community to mourn, to celebrate, to dream, and to prepare for victory.

For over 40 years, the Chorus has built an international reputation for musical excellence while remaining deeply rooted in service to the Los Angeles community. Hailed by the Los Angeles Times as “one of the last important links to a glorious tradition in music,” GMCLA has more than doubled in size to over 300 members, added professional and artistic staff, toured nationally and internationally, released fifteen CD’s, commissioned more than 300 new works and arrangements, and appeared frequently on national television. The Chorus membership donates over 60,000 volunteer hours annually to make GMCLA’s mission of musical excellence and community partnership a reality.