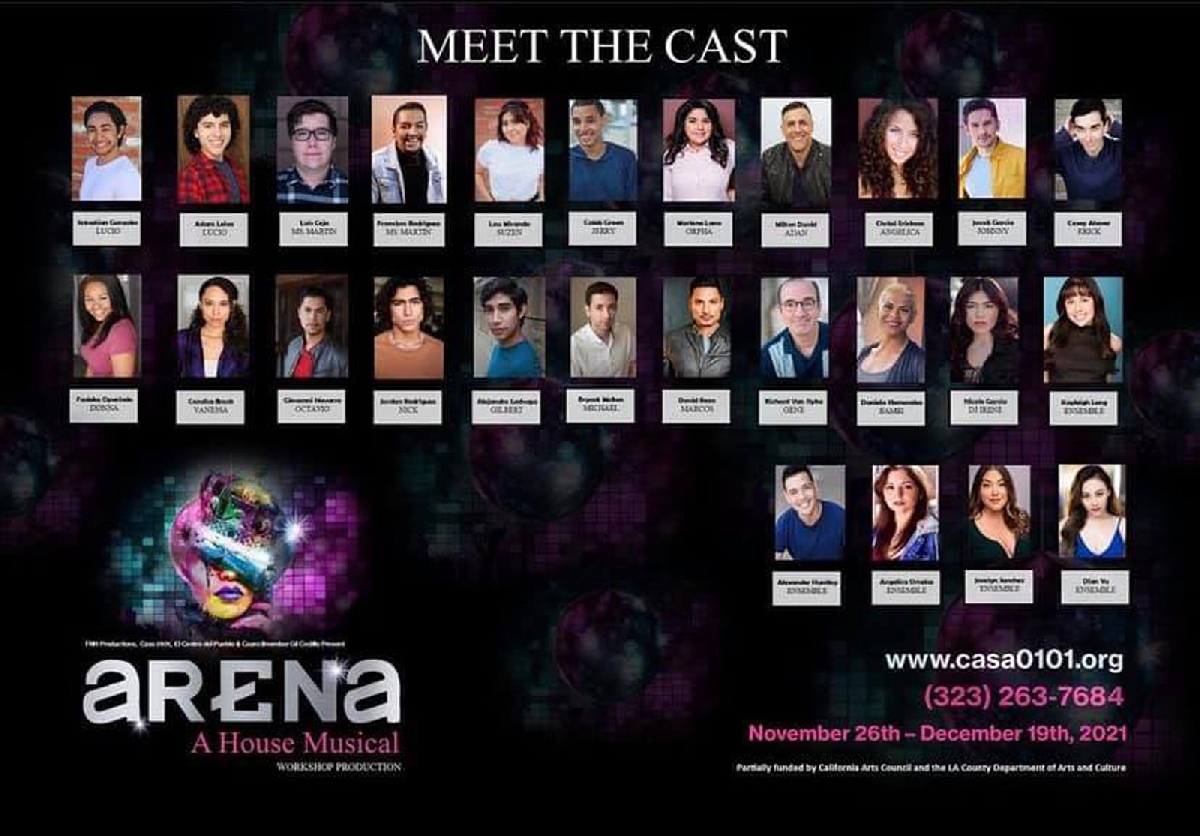 The story follows a Gen X young gay Latino man from East LA in his early twenties named Lucio Torrez looking to find his true self. Lucio was raised in the Apostolic Church, where his parents are pastors. He has a dynamic voice and is the music minister. Lucio has a closeted relationship with the church guitar player, and his parents find out. If he wants to continue to be in the music ministry, have a place to live and a family, his parents give him an ultimatum to go to EXIT, a gay conversion therapy group, or lose it all.

ARENA: A House Musical opens on New Year’s Eve 2015; the last night, ARENA and Circus Disco were open. After a monologue from leading character Lucio Torrez, we go back to the mid-1990s and follow Lucio’s “coming out journey” and the lifelong friendships, lessons, and moments that shaped his life.

This musical is an ode to the writer Abel Alvarado’s beloved Los Angeles, house music, and an amazing, fantastical place that helped many feel like they belonged. The show is for 18 years and older due to sexual situations and strong language.

In His Own Words: Abel Alvarado, creator of ARENA: A House Musical

“I first conceived the story for “ARENA: A HOUSE MUSIC-al” during the closing night of Circus Disco/ARENA Nightclub New Year’s Eve 2015. Circus Disco opened in 1975 and ARENA in 1990, so the night felt like the end of an era for me and the over 10,000 people gathered to bid farewell to these iconic places. Hearing the stories of so many friends of what these places meant to them resounded in me. ARENA was the first gay club I walked into as a young gay man in my 20’s and realized how lucky I had been to be surrounded by many other Latinos during my coming out experience. It was here; I made lifelong friends, was empowered, and built a network of support within those walls. Reminiscing with thousands of people made it clear that generations of the Latino LGBT community had found these places a source of strength. From this night, I was inspired to tell a small slice of history from my experience and the stories of friends and family.

The story is larger than what can be told in a 2-hour musical. During the intimate research, interviews, and outlining process, I realized the best way to build this story was through my personal experience. Since ARENA was the first gay club I walked into, the impact on me and many of my generation were unique to the era. The AIDS epidemic impacted the generation who came out during the 1990s. They experienced an increase of 130% of infections among Latino gay men in that decade. I had never seen stories reflect this or the contributions Latinos have made to advancing LGBTQ rights. As the story unfolded on paper and I began writing the book, it became clear that despite the turmoil of the era, there was a generation celebrating life through music and dance. I knew the story could not be told without the music of the time because it was music, under one roof, that brought many of us together and allowed people to live bravely and impact the world beyond ARENA.

The musical genre is one of the most collaborative art forms we have. The book writer, lyricist, and composer work together to create a roadmap of the story. It then goes through being workshopped and constructed with the director, music director, and actors who begin to bring the story to life. As we’ve added designers and choreography, the story is unfolding even further visually. When all these components come together, the story is ready to be seen after much refinement.
During the Workshop Production phase, audiences see the show, and the artistic and producing team can test all they have constructed. I conceived this story and wrote the book, and it is my vision that we will be able to tell a story worthy of the people it represents. The initial reactions have been highly positive and resound with many because ARENA gives a voice to a community often overlooked while creating a historical perspective. It also shows that this story is important and valid as a work of fine art.”