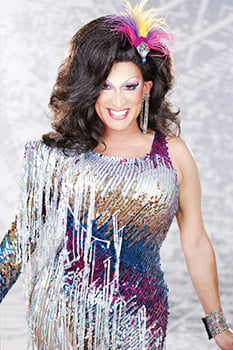 It is that time of the year folks. Just in time to kick off the holidays of 2013 Best in Drag Show is back! Best in Drag Show is the most fabulous, glamorous, ridiculously funny and yes even generous drag pageant spoof of the year. And yes they are proud of it. BIDS is the yearly benefit event for Aid for Aids, a program of Alliance for Housing and Healing. Each year celebrity judges award the best queen in drag.  Past judges and attendees have included Vanessa Williams, Lisa Rinna, Harry Hamlin, Melanie Griffith and of course long time supporter Ms Kathy Griffin. I had the pleasure of interviewing Host and co-founder Patrick Rush and the only Latina contestetant this year, the Boricua Mikey Cativo aka Mimi E. Enjoy! And see you on the red carpet Sunday October 6th at The Orpheum Theater in Downtown Los Angeles.

Samara: So tell us Patrick, how did Best in Drag Show get started?
Patrick: Best in Drag Show” is wayward daughter of “Battle for the Tiara”.  “Battle for the Tiara” was started by Alexis Pittman in the living room of his rent-controlled West Hollywood apt. It started as a joke. A bunch of guys dressing in drag to watch the Miss America Pageant one night. Turned into a small competition. Word spread and we slowly grew from Alexis’ apt. to a bigger apt. to a house in the hill, to a 99 seat theater, to the El Rey, then the Wilshire-Ebell and finally in our 10th year, the Wiltern (selling out 2400 seats). After Alexis Pittman passed away from AIDS, we decided to let the show go. 5 years later, Aid for AIDS approached Tom Pardoe about reincarnating the show. That’s how “Best in Drag Show” got started. Tom assembled as many of the original people from “Battle” that he could and we slowly tried to build back our audience. It’s now our 11th year and I think we’ve won back most of them, while building a new audience along the way

Samara: And how did it become what it is today?
Patrick: I think “Best in Drag Show” became what it is today because the audience feels the love and heart that goes into it. It also is what it is because of the audience. They are the most generous, most supportive, most forgiving (lol) audience in the world. Not only do they purchase tickets, but they continue to throw money and give donations throughout the night. Hearing them laugh, cheer and clap really keeps us going because by the time of the show, we are all so exhausted but recharged by their support.

Samara: You’ve had one of my favorite Divas Ms Vanessa Williams. Tell us about that?
Patrick: That moment has to be one of my all-time favorites. I couldn’t believe we actually got her to be a judge. Our friend Gabor (a former winner of BIDS,  Sunny Delight/Miss Florida) was the Desperate Housewives hairdresser and asked her to come. It actually came to me the morning of the show that year. I remember Alexis Pittman being PISSED when she lost her Miss America Crown.  Before Alexis died, he gave me the crown from the year he won the “Battle for the Tiara” and told me to give it to Vanessa Williams if I ever met her. I never quite figured out a way to pull that off and when I knew she was going to be there as a judge that night, I figured it was my shot. I didn’t tell anyone I was going to do it, so it could’ve been a disaster (especially if she didn’t want to come onstage). She could not have been nicer and more touched by the moment. She was very un-Diva like. Plus, just seeing her that close… she’s so unbelievably gorgeous and sweet.

Samara: Who are the judges this year?
Patrick: So far we have Holland Taylor, Kathy Kinney, Mireille Enos, Alan Ruck and Bellamy Young. We’re waiting to hear back on a bunch of others.

Samara: What are some of the craziest things the gurls have done on stage?
Patrick: Oh God… what haven’t they done? We’ve had cows, camels, elephants (I’m not talking about the contestants btw). Let me just tell you this, even though it’s not a real “beauty” pageant and the winner doesn’t really win anything, these gurls compete as if there’s a real prize and it’s a real pageant. I always enjoy a contestant who wants to win more than anything in the world because she never does.

Samara: Any last words?
Patrick: If you’ve never been, please come. It is a labor of love. We try to spend as little money as possible, so that most  of the money goes to help the clients of Aid for AIDS. It’s really a silly night with tons of laughs and a couple of tears (mostly mine). You will see things you don’t expect to see… and hope to never see again. AND, one year my dream might come true of seeing a contestant fall down the stairs. Maybe this year???

Samara: And now you Mikey. How did you get involved in the show?
Mikey: Four years ago a friend gave me a ticket to the Best in Drag Show and I sat there mesmerized. I knew I had to be on stage as a contestant, but it took me four years to work up the courage. In the meantime, I volunteered as a dresser and a dog (chorus girl).  The whole time I thought about my act and my character. I knew I could bring my own special brand of Latino flavor to the event and this year I went for it.

Samara: Can you give us any hints as to what you’re doing on stage?
Mikey: My character is Mimi E – Sheila E.’s cousin.  “Glamorous Life” is my theme song and this girl’s got a lot on her mind with big thoughts and big dreams. Let’s put it this way, my talent is a spicy mix of Shakira, J. Lo, and a bit of Ricky Ricardo. The energy will have you on your feet screaming for more.

Samara: Who or what has inspired you during this whole process you’re going through to get to the show?
Mikey: I have been inspired by Jeffrey Drew who encourages me every step of the way. Jeffrey is the director of the show and a past winner. He knows what it takes to pull together the fabulous costumes, memorize the dance steps, and build a memorable moment on stage. I love the creative process and am energized as I work through it with my fellow contestants. And, of course, I am always inspired by my wonderful boyfriend.  He is my rock. Even with a healthy dose of stage fright, he will be joining me on stage. Rob, I love you! I am also humbled as the only Latina contestant this year. 32% of the clients helped by Aid for AIDS and Alliance for Housing and Healing are Latino/a. This is a very special community and I am proud to represent as a Boricua.

Samara: What advice do you have for other gurls thinking of competing future BIDS?
Mikey: Just do it! The auditions are open and you should just do it

Samara: Any last words?
Mikey: Aid for AIDS does vital work for those who are suffering with AIDS and homelessness. Even as AIDS fades from the headlines, the epidemic is not over and people are struggling everyday to survive. It just takes a little run of bad luck to need some extra help. Who knows? One of us might be next.