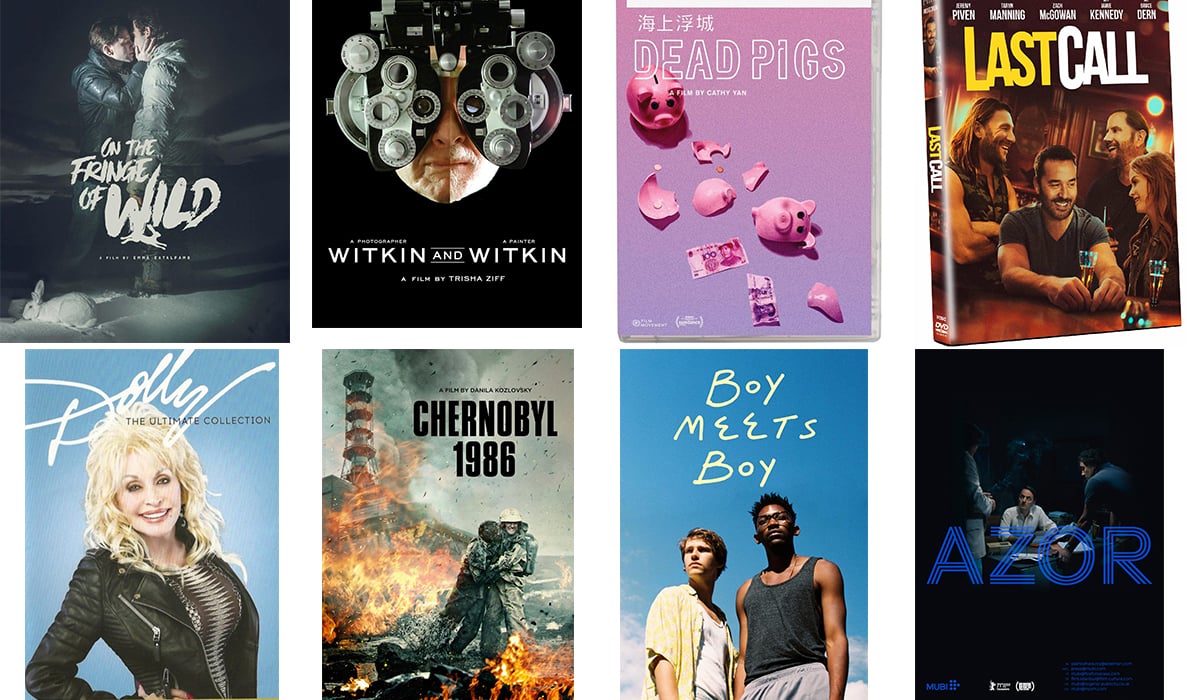 BOY MEETS BOY
Ariztical Entertainment, Inc.
On DVD & Digital October 26
Harry has been partying for 48 hours straight when he meets Johannes on the dance floor of a club in Berlin. With 15 hours left until Harry’s flight back to London the young men spend the day together wandering the city and experiencing the contrasts in their lives forcing them to confront their own truths and developing a connection.

CHERNOBYL 1986
Capelight Pictures
Available Now
After the explosion at the Chernobyl nuclear power plant number 4, the USSR and all of Europe is faced with an even greater threat – a possible steam explosion that would eject even more radioactive material into the atmosphere over the entire continent. Firefighter Alexey volunteers for what seems like a suicide mission: manually drain the plant’s reservoir before the melting reactor collapses into it. Risking their lives in service to their country, Alexey and his colleagues must navigate the labyrinthine passages of the plant’s underground, facing danger at every turn from the facility’s quickly failing infrastructure. With time running out, and the fate of all of Europe hanging in the balance, this team of ordinary citizens turned heroes must use all their strength and bravery to save their nation from complete devastation.

DEAD PIGS
Film Movement
Available on DVD Now
A down-on-his-luck pig farmer; a feisty home-owner defending her property; a love-struck busboy; a rudderless rich girl; and an American expat pursuing the Chinese Dream. Their fates converge and collide as thousands of dead pigs are found floating down the Huangpu River.

LAST CALL
IFC Films
Available on DVD Now
A local success story and real estate developer, Mick, returns home to his offbeat blue collar Irish neighborhood in the shadows of Philadelphia for a funeral and is obligated to stay to ensure his parents’ ailing family business gets back on course. Amidst all of this, he grows closer to his childhood crush who is also back in town, while enduring the constant ridicule from his old hometown crew. As Mick begins to reconnect with the neighborhood he grew up in, he finds himself at a crossroads when forced to either raze or resurrect the family bar.

ON THE FRINGE OF WILD
Breaking Glass Pictures
Available on DVD/VOD October 12
A 2000s “Romeo and Juliet” type romance between two teenage boys, set in a small Ontario town, where love does not win, but the surviving players grow to accept themselves as members of the LGBTQ+ community. Outsider Pictures
Premiers on DVD & TVOD October 19
Tucked away in an isolated country estate, four friends in their declining years reunite for one last gathering to celebrate their lives and their varied careers in the film industry. However, their peaceful holiday goes awry when a shady young couple harasses each member of the group, striving to coerce one of the friends to sell the vacation property so the couple may begin a swanky real estate development.

THE UNIVERSALITY OF IT ALL IndiePix Films
Available on DVD/Digital October 5
The Universality Of It All, a feature-length documentary by Andrés Bronnimann, explores this simple yet complex question with profound perspective and intimate detail. Told through the lens of the filmmaker’s longtime friendship with his college roommate Emad, a Yemeni refugee, Bronniman examines the subject of human migration and how it relates to such varied topics as climate change, colonialism, neoliberalism, globalization, identity politics, fertility rates, wealth gaps, trade wars, terrorism, and the media.

DOLLY: THE ULTIMATE COLLECTION
Time Life
Available on DVD Now
From her start out of Nashville in the ‘60s through her own spectacular variety shows in the ‘70s and ‘80s and beyond, Dolly has done it all and in 6 inch heels! Dolly: The Ultimate Collection includes some of the greatest star-studded episodes from her fan-favourte ‘80s variety show, a special Christmas disc, Dolly’s unforgettable 2009 “Live from London” concert, and more!

WITKIN AND WITKIN
IndiePix Films
Available on DVD/Digital October 12
Witkin and Witkin – This film explores the worlds of identical twins, Joel-Peter, a world famous photographer and Jerome, a painter and lifelong educator. An intensely human film from award-winning documentalist Trisha Ziff (The Man Who Saw Too Much) that addresses the philosophy of their practices, their art and relationship, and how women have shaped their lives. A film about perception and growing older, two artists working ion different media who shared a childhood but whose lives took very different directions. Filmed over five years, Witkin and Witkin documents the changes the two experience, as time tells its own distinct and disparate narrative.

AZOR
Now Playing in Select Theaters
Argentina, the late 1970s. Private banker Yvan arrives from Geneva with his wife Ines to replace a colleague who has mysteriously disappeared in military-ruled Buenos Aires. Moving through the smoke-filled lounges and lush gardens of a society under intense surveillance, he finds himself untangling a sinister web of colonialism, high finance, and a nation’s “Dirty War.”