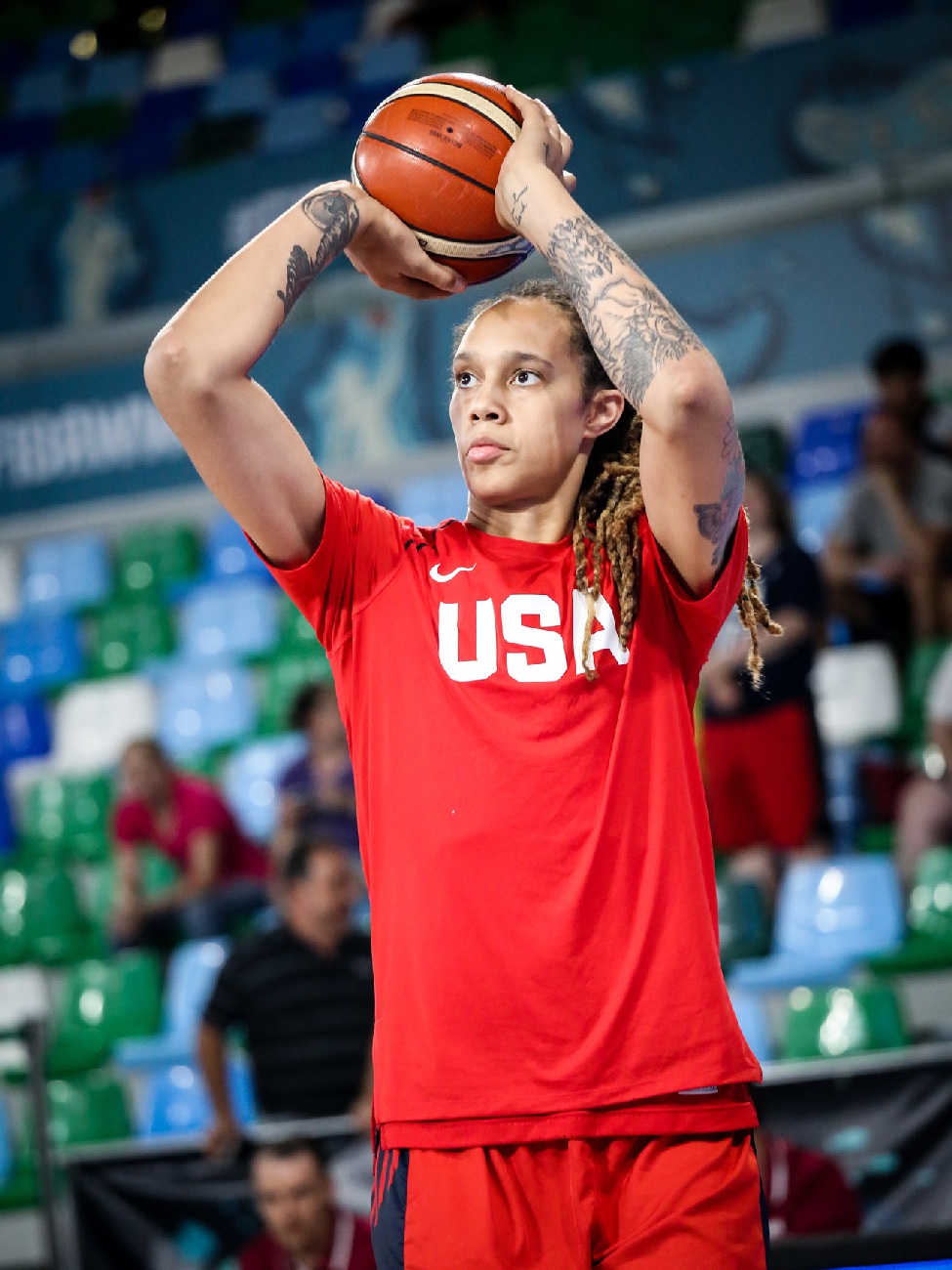 I thought the public conversations in the media about the Brittney Griner case, and especially during the coverage of the terms of her release exposed the worse in right wing politics. The conversations were ugly, largely racist and homophobic. Unfortunate these politics our community lives with daily.

It was wonderful and heart warming when Brittney was brought home, released from a Russian prison on December 9, 2022. The photos of her wife Cherelle in the oval office with President Biden, who secured her release and Vice President Kamala Harris said way more than a thousand words. The images sent a message to our community that we matter, that we are not invisible in the eyes of the U.S. President and those in “power” and that a Black lesbian had the full backing of the United States on the world stage.

As background, Brittney Griner is an open Lesbian and an American professional basketball player for the Phoenix Mercury in the Women’s National Basketball Association. She was arrested on February 17, 2022 and later convicted by a Russian court on August 4 and sentenced to nine years in prison for smuggling illegal drugs into Russia. “Illegal” according to reports was a small amount of cannabis oil in a vape pipe, which Brittney said was ‘accidentally packed’ while she was in a hurry to leave.

Griner is a two time Olympic gold medalist with the U.S. women’s national basketball team and a six-time WNBA All-Star. She is 32 years old, from Houston, TX and married to Cherelle Griner, her wife since 2019.

“It feels so good to be home,” Griner, 32, wrote in a lengthy message to family, friends, and supporters on her Instagram account Friday morning. “The last 10 months have been a battle at every turn. I dug deep to keep my faith and it was the love from so many of you that helped keep me going.” “I also want to make one thing very clear,” she wrote. “I intend to play basketball for the WNBA’s Phoenix Mercury this season, and in doing so, I look forward to being able to say ‘thank you’ to those of you who advocated, wrote, and posted for me in person soon.”

But within hours of Brittney’s release, the right wing outrage was on full display. To put her release in full context, she was traded in a prisoner swap for a dude named Viktor Bout, a notorious Russian arms merchant serving time in a U.S. prison. Brittney’s release was also being discussed alongside the release of a former Marine, Paul Whelan, who has been held in a Russian prison since his 2018 arrest on espionage charges. Supporters of Whelan’s release coupled the two together and expected the swap with Russia would include Brittney and Whelan for Bout. It was widely reported in the media that the deal Russia put forward was only open to Brittney for Bout or nothing. So the option of the two for one was never a viable deal.

So Brittney was released and Bout goes back to Russia. While the LGBTQ community largely celebrated the release the conservative right-wing goes on the attack, a two-fold attack pointed at our community and at Democratic President Biden. All over right wing talk shows, the rhetoric was toxic: All you heard was how the country left behind a Marine for a “lesbian” (essentially) and how there were upwards of 4,000 U.S. citizens held in prisons around the world who are not getting the same attention.

It is sad that a Marine is still left behind and we should do everything to help him get released. In fact, even Brittney says she will return to basketball and use her platform to call attention to those others held, including this Marine and support the President in his efforts.

“President Biden, you brought me home and I know you are committed to bringing Paul Whelan and all Americans home too,” she wrote. “I will use my platform to do whatever I can to help you. I also encourage everyone that played a part in bringing me home to continue their efforts to bring all Americans home. Every family deserves to be whole.

Representative Kevin McCarthy of California, who hopes to be speaker in the Republican-controlled House next year, said the exchange with Mr. Bout “made us weaker.” He added, “It’s made Putin stronger, and it’s made Americans more vulnerable.”

Fox News talk show host Tucker Carlson suggested that Whelan, the U.S. Marine was being punished for being a straight white male, and also said, “Whelan is a Trump voter, and he made the mistake of saying so on social media.” “He’s paying the price now. Brittney Griner is not. She has very different politics. Brittney Griner despises the United States.” Carlson was explicit about her identity — He continued, “Brittney Griner is not white, and she’s a lesbian.” (New York Times: Blowback Over Griner’s Release Exposes Depth of America’s Divisions).

It’s pretty obvious Ms. Griner’s case brought out conversations about race, gender and sexual orientation, gay-marriage and homophobia. The son of the former president said the Biden administration “was apparently worried that their DEI score would go down if they freed an American Marine,” using the corporate-world acronym for diversity, equity and inclusion. His father, the former president, took issue with Ms. Griner’s political views, declaring that she “openly hated our Country,” when Griner called for the national anthem not to be played during women’s basketball games.

Senator Tom Cotton, Republican of Arkansas said “…Americans welcome the release of Brittney Griner, but it shouldn’t have come at the cost of releasing one of the world’s worst arms dealers and creating a dangerous precedent for our enemies: detain Americans and Democrats will agree to set your worst killers free.”

A morning consult poll taken December 9-12, 2022 showed more than two-thirds of Republican voters (69%) opposed the deal that brought Griner home in exchange for convicted international arms dealer Viktor Bout. 51% of Republican voters “strongly oppose” the deal. Most Democrats favor the swap (64%), but the administration’s base of support isn’t nearly as ardent as Republicans’ opposition, with just 34% saying they “strongly support” it.

There were also ugly newspaper Headlines such as – Is Brittney Griner Worth It?: Pothead US athlete gets unjust sentence in Russia, whose drug laws she really did break. Is State Dept. giving her case special treatment because she’s a woke black lesbian? (The American Conservative, www.theamericanconservative.com).

Shouldn’t the release of an American citizen who is unjustly imprisoned by a foreign adversary be a moment for celebration whether you’re a Democrat, Republican, Green Party or Independent? Like the 2018 return of three men from North Korea, secured by President Donald J. Trump, or the 1991 freeing of Terry Anderson, an American journalist, after years of captivity in Lebanon. I believe the answer is yes.

We have to stay keenly aware of the tactics and games of right wing and homophobic commentators and politicians. They will use every opportunity to manipulate and leverage anti-LGBTQ sentiment against those who seek to protect our community, such as President Biden, VP Harris and Speaker Nancy Pelosi, to rally their base. They will use the “oh, what about me or them and cry foul” type tactics to leverage hate against us to simply further their positions. When you see it, call it out.

Organize and educate your family and friends about these homophobic tactics. Register to vote and stay involved in your local, state and in national politics.