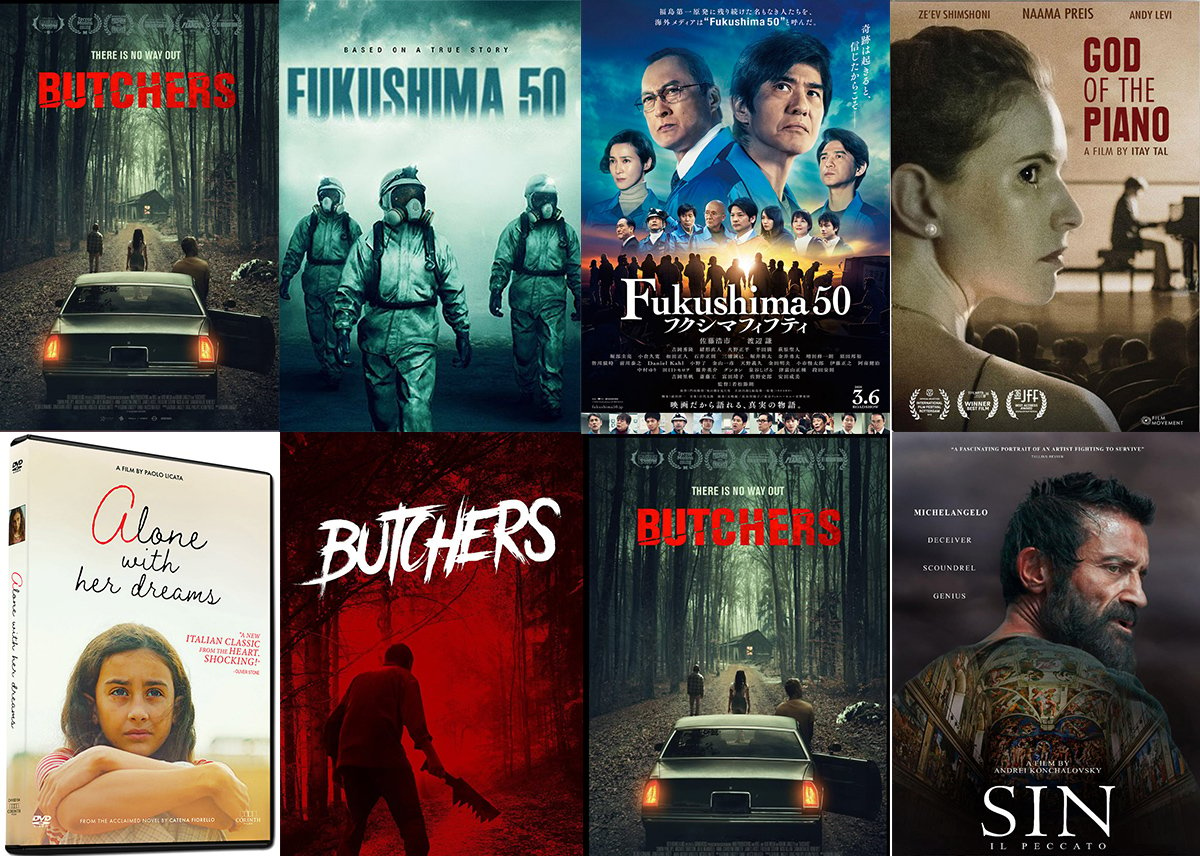 A family of sadistic butchers has dug into the back country and, from the deep freeze of winter to the dog days of summer, anyone who crosses their path is dead meat.

SIN (Il Peccato)
Florence, early XVI century. Although widely considered a genius by his contemporaries, Michelangelo Buonarroti (Alberto Testone) is reduced to poverty and depleted by his struggle to finish the ceiling of the Sistine Chapel. When his commissioner and head of the Della Rovere nobility Pope Julius II dies, Michelangelo becomes obsessed with sourcing the finest marble to complete his tomb. The artist’s loyalty is tested when Leo X, of the rival Medici family, ascends to the papacy and charges him with a lucrative new commission – the façade of the San Lorenzo basilica. Forced to lie to maintain favor with both families, Michelangelo is progressively tormented by suspicion and hallucinations, leading him to ruthlessly examine his own moral and artistic failings.

The film tells about the life path of the famous sculptor and painter of the Renaissance Michelangelo Buonarroti Florence, early XVI century. Michelangelo is a pious and argumentative artist. Although widely considered a genius by his contemporaries, Michelangelo Buonarroti (Alberto Testone) is reduced to poverty and depleted by his struggle to finish the ceiling of the Sistine Chapel. While painting the Chapel he is also pressured to simultaneously complete the statues which are part of the tomb designed and intended for Pope Julius II.

When his commissioner and head of the Della Rovere nobility Pope Julius II dies, Michelangelo becomes obsessed with sourcing the finest marble to complete his tomb. The artist’s loyalty is tested when Leo X, of the rival Medici family, ascends to the papacy and charges him with a lucrative new commission – the façade of the San Lorenzo basilica. Forced to lie to maintain favour with both families, Michelangelo is progressively tormented by suspicion and hallucinations, leading him to ruthlessly examine his own moral and artistic failings.

The critically acclaimed film tells the story of two strangers destined to intervene in each other’s lives after a misdial fates them together forever. Beth is a late-night janitor who accidentally answers a call from Scott who believes he has dialed a suicide prevention hotline. LAST CALL presents both ends of a harrowing phone call that has Beth navigating a life-changing conversation as she attempts to aide Scott within her limited means.
Scott (Daved Wilkins), a middle-aged, lonely and bitter alcoholic, calls a suicide prevention hotline, but accidentally dials the wrong number and gets Beth (Sarah Booth), a night-time cleaner, instead. She feels inconvienced at first, because after all, this is not her job. But when he tells her it’s the anniversary of his son’s death, something stirs inside Beth, who has sons of her own, including one that she’s just discovered didn’t make it to the sitter.
She tries to get Scott to talk about his daughter, but he tells her he thinks about dying. All the time. Although she’s not trained to handle this kind of situation, Beth tries to keep Scott on the line, hoping to help him through this difficult time.
This movie was shot in real time and is shown in split screen throughout their conversation.

NITRO RUSH
Max learns that a criminal organization has just recruited his 17-year-old son Theo to use him for the production and distribution of a new drug. Desperate to get him out of the situation, Max escapes from prison. He discovers that Theo and his best friend Charly have fallen under Daphne’s control, an alluring femme fatale, who is taking advantage of the teens’ expert computer skills to plan a bold and risky burglary. Quickly understanding he’ll be unable to persuade his son to walk away from it all, Max joins the criminal team to protect them. His driving skills and his athletic prowess will prove to
be invaluable assets in this action-packed sequel.

Imprisoned for eight years for manslaughter, Max learns that his son Theo, 17, is working as a hacker for a criminal organization headed by his old enemy, l’Avocat. When the latter is incarcerated in the same prison, it gives Max the opportunity to settle things with him. In the aftermath, Max escapes and goes to find Theo.
Under orders from Daphne, who is l’Avocat’s decision-maker, the teenager is in the process of getting ready to participate in a very risky operation to steal the formula for Nitro Rush, a powerful drug that provides a sense of invulnerability. Still angry at his father, whom he holds responsible for the death of his mother, Theo is deaf to Max’s warnings. To protect him, Max joins the criminal organization.

FUKUSHIMA 50
Japan’s Tohoku Region: at a magnitude of 9.0, the strongest earthquake in the country’s history strikes, triggering a huge tsunami and carnage that would end up killing thousands of people and displacing many more. It mercilessly engulfs the Fukushima Daiichi nuclear power plant in Fukushima prefecture, causing a crippling station blackout. Unable to be cooled, the nuclear reactors quickly turn into hydrogen bombs at the brink of explosion. If the power plant is abandoned, Japan’s destruction is assured. Facing a life or death situation, the power plant workers known as the “Fukushima 50”, including shift supervisor Izaki and plant manager Yoshida, remain on the site until the bitter end. As the world holds its breath, the Fukushima 50 fight for their hometown, their families, and the future of Japan.

MAMBO MAN
Corinth Films
DVD/Digital Feb 16
In 2017, after more than half a century since Castro’s revolution, Cuba opens her arms to the West and the Yankee dollar. Born into communism, JC (Héctor Noas) thinks himself a big fish in a small pond – a local music producer and promoter, farmer and small-time hustler who lives by his wits and imagination. To support his family and small circle of ‘business associates’ and maintain his local “Godfather” status, JC lives beyond his means – something that creates undeniable strain in his marriage.

MAYOR, from filmmaker David Osit, is a real-life political saga following Musa Hadid, the liberal Christian mayor of Ramallah, during his second term in office. Surrounded on all sides by Israeli settlements and soldiers, most people in Ramallah will never have the chance to travel more than a few miles outside their home, which is why Mayor Hadid is determined to make the city a beautiful and dignified place to live. His immediate goals: repaving the sidewalks, planning the town’s neon-bright Christmas celebrations, mulling “city branding” slogans with his aides in an effort to boost tourism…or dodging gunfire from an Israeli army fracas. His ultimate mission: to end the occupation of Palestine. Rich with detailed observation and a surprising amount of humor, MAYOR offers a portrait of dignity amidst the madness and absurdity of endless occupation while posing a question: how do you run a city when you don’t have a country?

ALONE WITH HER DREAMS
Corinth Films
DVD/Digital Feb 23
Filmed on the rugged and beautiful Sicilian coast, ALONE WITH HER DREAMS explores the universally timely themes of family separation, emigration, generational conflicts and feminine repression. Set in the late 1960’s, Lucia is left behind with her grandmother while her parents emigrate to France to find work. Lucia is greatly distressed that she must stay in Italy and struggles to learn her role in the tiny, traditional village under the watchful guidance of her stern grandmother, who Lucia struggles to understand. Unbeknownst to the young girl, her grandmother hides a hideous family secret which endangers Lucia’s well-being.

Filmed on the rugged and stunningly beautiful Sicilian coast, ALONE WITH HER DREAMS explores the universally timely themes of family separation because of emigration, generational conflicts and feminine repression, continuing the traditions of the Italian neorealist masters; Rossellini, Visconti, Olmi and De Sica.

Set in the late 1960’s, the film explores the issues of immigration, community values and family devotion through the eyes of a young girl, Lucia who is left behind with her grandmother, Maria, while her parents emigrate to France to find work. Lucia pains to be with her family as she struggles to learn her role in the tiny, traditional village under the watchful guidance of her stern grandmother. As Lucia enters womanhood, her childhood innocence is lost to a hideous family secret and her world of childhood fragility and heartbreaking nostalgia melts into adulthood’s poignant understanding.

GOD OF THE PIANO
FILM MOVEMENT
DVD/DIGITAL FEB 16
For concert pianist, Anat (Naama Preis), music is all she has. Having never been able to reach her father’s lofty musical standards, she rests her hopes on her unborn child. After her water breaks during a concert, she delivers a boy, who, devastatingly, is born deaf. Anat’s will to raise a musical genius who would befit her respected, musically accomplished family only becomes stronger, and she takes drastic measures to make sure her son becomes the composer her father always wanted. But when the boy grows up indifferent to his destiny as a great pianist, Anat will have to stand up to her father — and her own actions.

For Anat, music is everything. Having never been able to reach her father’s musical standards, she rests her hopes on the child she’s about to have. When the baby is born deaf, Anat succumbs to extreme measures to keep the dream alive.