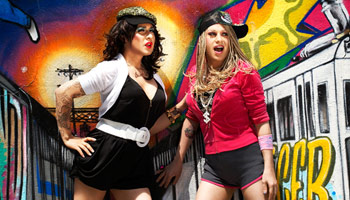 Hip-Hop has become some of the most mainstream music in the world what with every song on the radio that is being repeated all through out the day happens to have Hip-Hop influence. Even if you don’t like Rap you end up singing or humming it at any spur of the moment through out your day.

Well it is no surprise that two drag queens from NYC have taken advantage of the Hip-Hop popularity and have formed the first of it’s kind Drip-Drop duo, that’s Drag Hip-Hop. I believe they coined the phrase. Raven -haired Chic and blonde Sassy are two super talented, sexy, drag Hip-Hop artists that are breaking down stereotypes, walls, and anything that gets in their way to become part of the out Hip-Hop movement going on in this day. You have gay, trans, lesbian, and I’m sure many bisexual rappers but this drag duo is a first of it’s kind. We have to give it up for them and their unique style of presenting drag and Hip-Hop and making it work. Hip, Hip, Horray for the drag Queens of Hip-Hop!

Samara: When did you ladies first start doing drag?
Chic: We started doing drag our freshman year of college. By junior year, you could find Chic and Sassy running around campus in the city of Boston all the time!
Sassy: We met while attending Emerson College in Boston, MA. We had both started doing drag around then. Chic came to my dorm room to ask me if I wanted to perform with her at an open-mic night. We really didn’t know one another until that exchange. I was kind of honored that someone knew I was an aspiring drag queen and wanted to perform with me. I agreed and Chic & Sassy were born! We performed a lip-sync to “Two Girls From Littlerock,” a song performed by Jane Russell & Marilyn Monroe in the film Gentlemen Prefer Blondes. Guess who played whom?

Samara: How did the Hip-Hop come about?
Chic: We wanted to play with music, both had been fans of artists like Lil’Kim, Queen Latifah, and Beastie Boys, and decided that the rap sound would best actualize our political beliefs as well as fit with our aesthetic. Rap was born of an oppressed people and as gay, trans rappers, we thought it was the best medium to speak about our own struggles.
Sassy: We have both always been big fans of Hip-Hop, and we always wanted to explore it as an art form. We have experimented with various art forms (comedy, drama, singing, dancing), and we wanted to try something we had a deep passion for. For myself, I have always thought of Hip-Hop rhymes as the voice of the oppressed. Who in this world is more oppressed at this moment in history than men in dresses? Plus, I like the fact that it is unexpected. Chic & Sassy have always been unpredictable. We also like to be provocative. Audiences see drag queens and expect lip-syncing, but we like to surprise them.

Samara: Do you write your own lyrics/rhymes?
Chic: We do write our own lyrics. Coming from acting backgrounds, we understand the importance of language. At the same time, we believe that music is a universal language that affords us a new way to creatively speak our minds, share our beliefs and raise questions.
Sassy: Yes, we do write all of our own lyrics and music. We co-founded the NYC political comedy troupe “Gender Offenders,”
where we wrote skits as well as music. It comes very naturally to us to express ourselves through our rhymes.

Samara: Tell us about the ass song? I love that one.
Chic: “Ass Play” is a song about empowering all sexes and sexual orientations. Men have historically ruled over rap (as well as society in general), and we wanted to turn the tables. Instead of the usual male gaze that has historically sexualized women, we’ve turned our male gaze on men to sexualize them. And we just like ass!
Sassy: We are proposing a question to the audience and to society as a whole. “Is what’s good for the gander, good for the goose? and “What if the gander is dressed like a goose?” The chorus is “I like a nice tight ass, to lay my hands on it, I like to play with ass the way that men they play with tits.” We like to blur gender lines and roles.

Samara: How have people reacted to your hip-hop?
Chic: We’ve gotten a lot of really mixed reactions. Some folks really love it, and others are totally turned off by it. People often seem to not understand what we are doing. Most drag performers, especially outside of NY, use the art of lip-sync to express themselves. Chic and Sassy have something to say and our own voices are our greatest tools. Freedom of speech means anyone can express themselves freely. We like exercising this right and the beat of the music makes it fun.
Sassy: There is a growing gay “out” Hip-Hop community in Los Angeles and New York City, but most of the country equates hip-hop with masculinity. If you are not masculine, you don’t belong. We don’t want to “blend in” or assimilate or try to be something we are not. We are drag queens, we are rappers and we are glamorous. Usually people expect us to be funny, because, in their eyes, drag queens are clowns. Chic & Sassy are not clowns, and we do more than tell dirty jokes and lip-sync for straight girls’ bachelorette parties. We have our own voices, and they are our most powerful weapon.

Samara: What rap song are you promoting now?
Chic: We have a new video for “Sex Like A Man” being released very soon. This song, again, is a reflection of gender roles and societal expectations. Men seem to be able to have sex freely and without judgement. Whereas “girls” are expected to almost not have a sex drive at all. We are here to empower any and all feminine spirits. “Girl” Power!
Sassy: Our new single is called “Sex Like a Man.” The video should be out in August.

Samara: When does the whole CD come out?
Chic: With our performance schedule, day job obligations, and family obligations, it’s very hard to coordinate a time to get into the studio, but we are nearly done and would like to share our work with the world very soon! We hope to have a CD out by the end of the year!
Sassy: It’s called, “We Are… Chic’Speare & SassTronica.”

Samara: Any other rappers that you would like to work with?
Chic: Do you have Lil’ Kim’s phone number? How about Peaches or Gaga?
Sassy: Everybody! Of course our fellow out Hip-Hop artists: Soce, the Elemental Wizard, Bone Intell, Deadlee, Baron, and transgender rapper FoxxJazell. Also I love Peaches, Nicki Minaj, Princess Superstar, The Beastie Boys, Northern State. Of course, we’d love to collaborate with The Queen, Queen Latifah!

Samara: Any last words to your new fans?
Chic: Stay tuned and look for us on facebook and myspace! Thank you for your support!
Sassy: Chic & Sassy are what you thought was never possible, thanks to our fans. The CSC kick ass! We love you all!