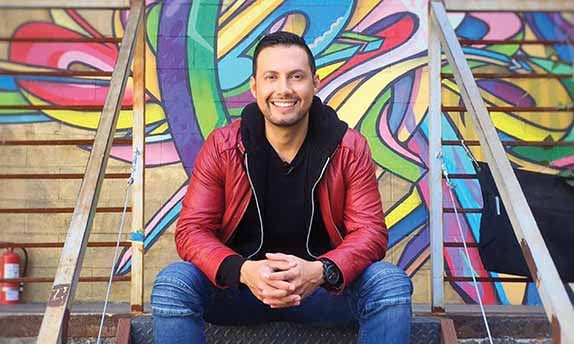 On October 11th of last year, I woke up at 4 in the morning to do a couple of interviews for Univision 34 Los Angeles. I had been invited to share my story as an openly gay man and talk about my podcast with the shows “A PrimeraHora,” and “Edición Digital California,” for National Coming Out Day.While I was getting ready, I would look at my clock, and I knew that in Miami, you were more nervous than I was.

A few days before we had recorded an episode for my Spanish-language podcast “De Pueblo, Católico, y Gay,” in it, Luis shared his story with me, as well as his fear of coming out. It was a different fear, because you had already had that conversation with your family and your close friends, however, this time you were going to do it on national television. People who identify as LGBT “come out” many times. The first time we do it, the entire moment in detail, is permanently engrained in us. But then, in our everyday, in every person we meet, in every new job we get, in every new space we occupy, once again we are faced with the decision to deny, admit, or omit our sexuality to someone.

I have known you for many years, and for many years I have the privilege of calling you a friend, but on that day, I was simply a fan. Even though I knew you well, even though we have shared many conversations and even though I have shared many dinners with you and your now fiancé, I couldn’t help but get emotional for what you were about to do. I know what it feels like to fear rejection from an audience. I know what your work means to you, all the hours you put in and I even know some of the sacrifices you have made to get to where you are at. I’ll never forget what I felt watching you that morning sitting on that couch, looking straight at the camera and taking a small, but profound breath before saying what I knew you were going to say.

Finally, a man like me on national television said, “I’m gay.” I have been asked before, when was the first time that I felt like I was represented on any media. I finally have an answer, it was on October 11th of 2018, when Luis Sandoval shared his story on Univision’s DespiertaAmérica.

Thank you, Luis, for giving us that representation that was long awaited. Thank you for not being a caricature or a stereotype just to fill up a space. Thank you for being honest and for being you. As a gay man that works in this industry, and that for a long time felt afraid of coming out at work, you gave me so much strength. I’m sure you gave strength to many more people as well. It’s an honor to be your friend. It is beautiful to see all that has happened since, the LGBT stories that you now cover and that take up an important space in your show, and all the work you have done without cameras as well. Walking at LA’s “Pride 2019” next to you and Renato is something I will never forget. I want you to know that Spanish Language television is better today, and it is more inclusive of the LGBT community and that is thanks to you and all those who have come before you, bravely facing their fears.

Luis Sandoval is an LA based reporter and producer for Univision’s DespiertaAmérica.