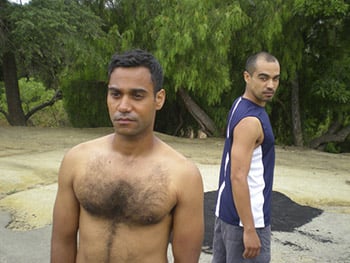 Most people would be satisfied working on a top-rated television show, milking that high paying gig as long as the Nielson ratings held out. Not so for former CSI: Las Vegas editor, Augie Robles. The AFI graduate started as a filmmaker in the early 1990s writing his own short films that made the gay film festival circuit. After 14 years with CSI, Robles returned to what he loves doing best, making films that fuse Latino images with gay stories.

Robles’ first post CSI production The Rookie and the Runner, is a ten minute short film about a gay Latino who ends up bargaining for something a little more hazardous than shin splints while running through Elysian Park. The short has screened in more than 20 festivals throughout America and Europe. Last month it played at Hollywood’s Egyptian Theatre in Outfest’s Fusion LGBT People of Color Film Festival.

Adelante caught up with Mr. Robles to discuss why he left the industry to make independent films.

Castel: So why did you return to indie filmmaking?
Robles: You can work your whole life in the business and never work on a top rated show. I was blessed to have that opportunity to play with the “big toys.” It was a good fit because they challenged me, and I expected a lot from myself.
No one knows what we do as editors; our work is the invisible art. I love the craft of editing but I wanted to get into the director’s chair, and the only way for me to do that was to write and direct my own movie.

I also have this political part of me that wants to see more images of Latinos in the media. There are very few people of color on TV. It’s gotten better since when we were growing up, but if we talk about gay people of color— you don’t see us at all. The industry is Hetro-normative to the 50th degree. I think that’s why actors are so closeted. It is that strong, that pervasive! I read somewhere recently that the four major networks still get an “F” rating for diversity. Just before every season hiatus, I thought that if I could work on my own film then I’d go back to editing CSI and not be this frustrated director. Often, during the hiatus, I’d cut short films for my friends but never my own. That’s when I decided I had to make a short film.

Castel: Tell me about The Rookie and the Runner.
Robles: It’s about a really hot guy being chased by two other hot guys in Elysian Park. The runner’s interested in them both, but one of them has bad intentions, and he doesn’t know which one is which.

Castel: Why did you make this film?
Robles: In CSI it’s about the cops always being right. With the Rookie, I flipped that idea around because I think cops going out there and entrapping people in the parks is wrong. I also really just wanted to make a gay action chase movie. But this is a fantasy because you don’t usually get away from the cops. If someone is entrapping you and you’ve put yourself in the position where the runner is in the film, you don’t get away . . . in that way it’s a fantasy, but what resonates as authentic, I hope, are the rituals around cruising and same sex desire.

Castel: Men do like a good sport. . . What’s been the audience’s response?
Robles: Nobody ever talks about the entrapment element in the film . . . they say things like “it’s sweet,” or it “doesn’t apologize for desire.” I’m not interested in making a coming out movie where someone is struggling with their desire. The runner isn’t confused about what he likes, he’s not ashamed of what he’s doing. That’s why there’s an innocence to it . . . it’s about anonymous sex, and how transgressive it is in our society. But at the core it’s a story about two guys making an imitate connection.

Castel: That’s so Sexual Outlaw by John Rechy. What’s your new film?
Robles: It’s a story about a middle-aged, alcoholic artist who had a lot of potential but winds up alienated and frustrated. He draws a figure of a man, and the man in the drawing comes to life and becomes his lover. Think of a gay episode of the Twilight Zone !

I want the audience to think: ‘Is this really happening, or is he going crazy?’ It’s also framed around the universal notion of falling in love. But what is it really like to fall in love? You do go a little crazy when you fall for somebody. There are studies about how the brain works when you fall in love, the initial pull is unreasonable. It’s called infatuation. For the artist, his life is so unfulfilled he prefers fantasy to the real thing.

I’m working with the visual artist Hector Silva. He’s going to do original drawings for us to use in the film. I think it’s going to be a really cool fit.

Castel: What’s the length and budget?
Robles: It’s a short, so less than 15 minutes, otherwise it gets a lot harder to program in festivals. A true budget is hard to peg since many things will be donated to us in terms of time and labor. But, the trick now is to do some quick fundraising. What I have to remember, because I hate asking people for money, is that people really liked the Rookie and there are investors out there willing to give money to see gay people of color on the screen. My film could be about a straight guy falling in love with a woman. But it’s about two Latino men. My work will always be infused with politics, style, and the craft.