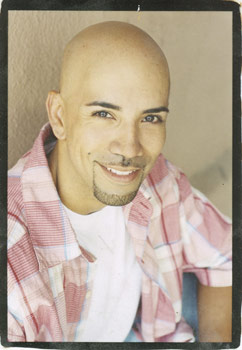 What makes a person write a book about their life? It’s the ultimate dare to bare your soul to the world. To come clean and be honest with your audience or anyone interested in listening. That’s what I would say. Well, Justin Hernandez, a former Chulo del Mes at Adelante and current blogger did just that. From go-go dancing and stripping in LA and NYC, Justin now writes the blog nakedinnewyorkcity.com. The site deals with his life, dating and otherwise. Although from NYC Justin spent seven years in the Los Angeles area and writes about all his past life experiences in the scene dealing with dating, alcohol and yes sex! I had a chance to chat with Mr Hernandez and discuss a little bit about his book. There were mentions of the Midtowne Spa, powerful music industry execs, and more… So read on for all the juicy details. And get your hands on this summer must read.

Samara: What made you decide to write a book?
Justin: I had been writing a blog entitled Naked in New York City for about six months and was getting good feedback on it.  I was told it was really well-written and I should consider writing a book.  When I thought it over, I realized that there was so much I wanted to say about my past, but I didn’t feel like my blog was the right place for those stories.  I wanted to show people what my life was like before the blog and what led me to start writing.

Samara: And what can you tell us about the title?
Justin: The title came to me after a night out with some friends.  I explain the scenario that led to the book title in the intro of Inside the Vortex, so I don’t want to spoil it for those who haven’t read it yet.  Let’s just say this book is a look at the perfect storm that my life has been in the past and what contributed to all the chaos!

Samara: What does your family think about how honest you are about your life?
Justin: I’m very fortunate to have a super supportive family.  I can talk to my folks about anything.  My parents are fully behind the book and hope it is successful, even though they haven’t read it.  My mom knows that I have been to some dark places and she told me if she read about everything I went through it would make her sad.  I respect her feelings, so I don’t force it on her.  Regardless, both her and my dad are always asking how the book is doing.  I have some other family members that I know purchased the book…I haven’t heard anything from them yet.  But as long as my parents are in my corner, that’s all that matters to me.

Samara: Is there stuff that you chose not to talk about and had to be left out of the book?
Justin: My intention was to cover all the major moments in my life, and I accomplished that.  There are a few funny stories, especially about some of the dates I had when I lived in Los Angeles, that I had to leave out.  I couldn’t really find the right place to put them in the book without interrupting the flow of everything else I had written.  So I chose to edit them out and they will most likely be posted on the blog throughout the summer.  It will be a good way to get people to check out the book as well as keep the online readers entertained.  I have a story about an afternoon I spent with a very powerful music industry exec that I think will make people laugh!

Samara: In your introduction you claim that “this is not a self imposed pity party” you own up to everything that has happened in your life. Can you tell us about that?
Justin: The one thing I have learned is that I have had a certain amount of accountability for the events that took place in the past that I didn’t always want to own.  It’s easier to point the finger and blame other people or circumstances around you.  No one wants to admit that they invited trouble into their life.  However, once I became self-aware of both myself and my actions, I realized that there is no shame in saying, “I messed up, I fell on my face, but I am a better person for having had those experiences.”  I think as humans we like to punish ourselves for embarrassing decisions, so I’ve learned to let go of that as well.

Samara: What do you consider to be your highest point and your lowest point in life, thus far?
Justin: The highest point without a doubt has to be this book.  For a year, I wrote, edited, and re-edited.  It’s probably as close to the birthing experience as I’ll ever come.  It’s a major thing to be able to exclaim, “I wrote a book!”  I’m a former stripper/go-go dancer, so relying on my looks and sex appeal has always been second nature to me.  Now, I’m being acknowledged for my writing and that feels amazing!  As for a low point, wow there are so many to choose from. Ha ha.  I guess I will say one of the lowest points was probably my last boyfriend in Los Angeles.  It was a terrible relationship.  He was an alcoholic and somewhat abusive.  Definitely not good for me.  I couldn’t figure out how I let the quality of my life get so bad.  But it was a turning point.  You know what they say… when you hit rock bottom, the only place to go is up.

Samara: Do you feel like the truth sets you free?
Justin: Absolutely!  I’ve lost so much sleep in the past because of all the secrets I was keeping.  Once I started being honest with others, and more importantly with myself, it was a huge load off my mind.  I began my journey towards complete honesty shortly before I left Los Angeles, but writing has definitely furthered it and taken it to a whole other level.  I’m a sound sleeper now.  I’ve missed everything from rainstorms to fights in the street right outside my window because I’m in a deep sleep.

Samara: So there’s a lot of the Los Angeles gay scene in the book right?
Justin: Yes.  I spent seven years in Los Angeles. Everything from my time as a server at the Abbey, my days of stripping at Midtowne Spa, and go-go dancing at different clubs in L.A.  It’s all there!

Samara: And I hear you were once an Adelante Chulo del Mes?
Justin: Oh yeah, back in 2007 I was a Chulo del Mes!  I begged them to feature me, ha ha.  And I was very grateful for the opportunity.  It was during my go-go and stripping days… those were wild and crazy times.  I worked at so many different places, but I especially loved working in the Latin clubs.  There was something special about dancing at Circus or Arena.  I think it’s just the warmth and love that we Latinos give off.  It’s always a great feeling to receive support from your own community, so once again, I’m very thankful to Adelante.

Samara: Tell us about your blog nakedinnewyorkcity.com?
Justin: It started out as this little project to keep me busy in my free time.  It was just me writing about my dates and looking for love in New York.  But I was going to keep it honest.  No matter how bad I wound up looking to the readers, I always wanted to write the truth and not sugar-coat things.  I wanted to be “emotionally naked.”  That’s how I came up with the title.  That, and it’s also a playful reference to my past as a stripper.  I still blog when I can because I love writing.  There haven’t been many dates lately though.  Putting out a book is a lot of work and leaves little time for men!

Samara: Where can people buy your book?
Justin: Best way to get Inside the Vortex is on Amazon.  It’s on paperback and Kindle.

Samara: Any last words?
Justin: Just a big thank you to everyone who reads what I write.  I hope that revealing my truths has inspired others. And remember, regardless of the circumstances or if the odds are stacked against you, there are no limits to what can be done in life.  I’m living proof!