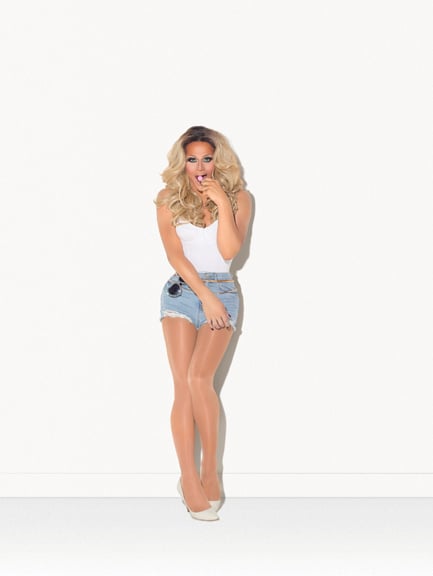 As you all know by now RuPaul’s Drag Race is back for a 7th season. And we Latinos are being represented by the super talented, beautiful and sometimes bitchy Ms. Kandy Ho’. She has talent, looks and gives you bitches enough drama to chat about on social media. You wouldn’t expect anything less from a Puerto Rican mami. Sure she started out with a five o’clock shadow until Michelle Visage pointed it out. But now our sistah is looking even more fierce. It’s all about constructive criticism bitches. I say top three for Ms. Ho’. And help a sistah out bring her to the states people. Y aquí les traigo a la deliciosa Kandy Ho’.

Samara: Where do you live at now?
Kandy: I’m still living in Puerto Rico but eventually I would like to move to the states. I was born and raised in Connecticut until I was 10 years old so coming back to the states has always been in the back of my mind.

Samara:  How did you get into drag?
Kandy: The first time I got into drag was to do Madonna at a talent show but I never thought I would do it again. A year later a couple of my friends came up to me and asked if I want to be Kimberly from the Pussycat Dolls at the Puertorican gay parade. I was a little hesitant at first but my boyfriend at the time told me to just try once again and if I didn’t like it just stop there, so I did it and I loved it and I’m still doing drag until this day.

Samara: Had you auditioned before for RDR or was this your first time?Kandy: I’m very happy to say it was my first time auditioning for “RuPaul’s Drag Race.” It’s really a big deal for me since I know a couple of girls who auditioned for many seasons and to just be cast the first time I auditioned is amazing.

Samara: Are you OK with people refferring to you as a Bitch or Bitchy from seeing you on the show?Kandy: I feel that once you’re in a reality show you expose yourself for people to see you however they want to see you, whether it’s a bitch whether it’s bitchy whether it’s stuck up people will love you and some people will hate you and I understand that. I’m not a $100 bill for everyone to like me, so I’m good.

Samara: How do you stay grounded? Are you spiritual or religious?Kandy: I have the best friends in the world to keep me grounded and let me know where I come from. Fame can be a tricky thing but I thank God that I know who I am and where I come from and that fame is not forever. I was raised in a Penecostal and Baptist Church, but I’ve always been free and my parents never held me back on what and how I feel, so that makes me blessed.

Samara: What new projects are you working on?Kandy: Right now I’m focusing on my performances because that’s what I’m known for, and little by little I’ll work from there. I haven’t been home for more than three days so when I get the time I’ll do more things. I don’t want to rush anything.