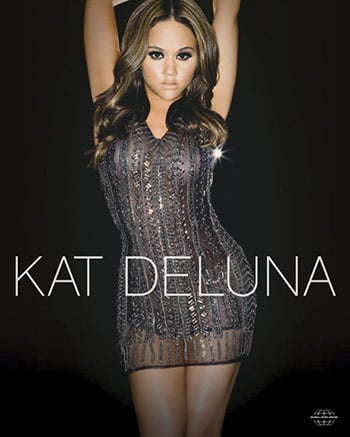 She’s been able to Whine Up the crowd and proved to be Unstoppable at a very young age. Now, singing sensation Kat DeLuna is telling audiences to Viva Out Loud, thanks to her sophomore album. The Dominican American is back on the music scene and is hoping to hit a high note with critics. America hasn’t heard much from Kat since 2009, but that’s because she’s been in high demand in numerous countries. The sassy artist is now gearing up for a huge gay tour with Club Papi where she will give the Lunatics a taste of her new music. I recently had a chat with Kat during her writing session. She filled me in on returning to the stage with Club Papi, what she really thinks about her gay fans and just who Pepito really is.

You’re once again teaming up with Club Papi for a tour. What can we expect?
I am really excited about this tour. We are very meticulous, lets do this, how are we gonna do it, which cities are we going to target? I can’t wait to be with my gays again, but it’s also a showcase of Viva Out Loud, the actual album and that’s why the tour is called Viva Out Loud, so it’s like two things in one. It’s almost like an album listening party for the whole tour. What better way to show it to my gays who have shown me so much support with my career?

What would you like to say to your gay fans?
Viva Out Loud means to live loud. Don’t be afraid of who you are. Thank you so much for all of the support! I am 120% behind them just the way they are behind me…I’m just excited! If you were to see me right now, you’d see my face has turned red because of how happy I am.

Let’s talk about your wardrobe for the tour. I know you’re going to wow us!
I’m working on something right now that can best be described as funkylicios. Laughs
You have to see it and I think it’s all about the vibe. They say that clothes give swag. No, I think you give the swag to what you’re wearing. I will be a little bit more daring than before. I always try to be fun and easy going. Do what you want. That’s always my thing. You have to feel good.

You have a new album coming out soon. Tell me about it.
It’s been a long time coming. I worked really hard on this particular album. It’s my American sophomore album, so it’s more like a musical experience the same as a growth experience. I know when I get on that a stage a lot of the fans that were behind me in ’07 when I first came out and then ’09 when my European sophomore album came out all together. The gays are in touch with everything! If there’s an album in Russia, trust me they know everything about it. That’s what I love. I definitely want to get on the stage this time around they’re going to see a Kat that has grown throughout the years. This is for the Lunatics. We are a family.

Who would you like to team up with in the very near future?
I really didn’t collaborate with a lot of artists on this album because when I started in this business, I did it the other way around. I’ve done like a zillion collaborations, which I have so much gratitude for. I love Pit Bull and would love to work with him on something crazy, but we would have to do more than just a song. It would have to be like a to be continued, to be continued, to be continued. I feel like both him and I represent the whole Latin/American generation in where spanglish meets with pop-culture and the world. That would be an amazing collab. One day I’d love to do a beautiful ballad with Celine Dion or Andrea Bocelli, you know I sing Opera as well.

You’ve had great success here in the states, but you’re enduring huge success in Europe.
Europe is another world. From nothing to oh my God! I already have two albums out there. Let’s not forget about my Asian and Eastern Europe fans. Those are very important countries that I love to go and visit. Eventually I just want to connect the world…connect the dots from where all my Lunatics are. I do have to confess. I have spent a lot of time out there more than I have in the states and that’s why I want to really concentrate and do a little bit more here, which starts off with a gay tour.

You’re constantly traveling. Is there something you take with you at all times, so that you don’t feel homesick?
That’s a good question. I love my teddy bear. His name is Pepito. When I was little I had a tiny bird and it lived for two days, but it was my first pet ever, so from now on, every pet or any teddy bear that I have, I call it Pepito. He comes along with me all of the time. I sleep with him and I hug him.

Is there something about you that people would be surprised to find out?
I still have one of those tape reorders to record my thoughts. Sometimes I just speak away, sometimes you can go back to those things and you can get a song out of that. Ever since I was 9, I would always walk around with that tape recorder and it’s never left my sight.