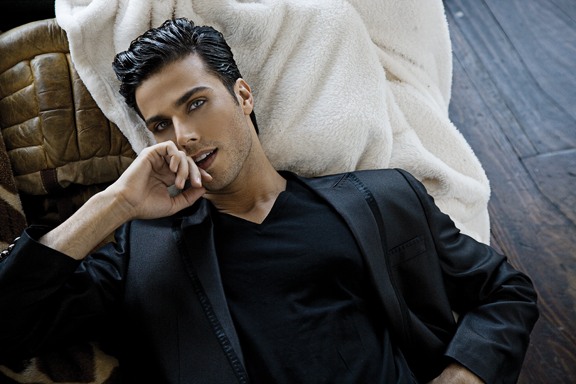 Kfir, Is a Class Act!
By S. Riviera, VivaLaRiviera.com
Photos by Ernesto Linneman

Kfir, just one name like Cher or Madonna. Although he’s a little more Elvis and Gene Kelly with his look, music and dance. He’s absolutely stunning, talented and has a vibe all of his own. He’s not the type to record a quick dance track for clubs to play he’s more about the longevity of music. Which is what I love about this class act. One look and hear at his “Cheap Thrill” music video and I was hooked. Channeling Gene Kelly with a girl looking like Audrey Hepburn and this cute adorable boy in a classic looking music video. He definitely stands the test of time. And now Kfir (pronounced kah-feer) who hails from Israel and is a NY based singer/songwriter is ready to release his new EP for all to hear.

Samara: Tell us about your music.
Kfir: This passion/obsession I had since childhood. Since I can remember I was surrounded by music. At home I was listening to my parents Pop, Rock, R&B and Folk sounds and at the ballet classical music. Though I was ashamed of my voice I didn’t really sing out loud until later in life. I discovered Opera while performing at the Metropolitan Opera house in NYC and fell in love with it as well. I started my own musical creation journey in 2005 after a bad breakup and certain death. I started writing poems and wanted to put music to them, around 2009 I got the chance to do so after joining the Phantom of the Opera tour. I started to be able to record professionally since I had a better income than a struggling dancer, which was the reason why I took that job in the first place.

Samara: I’m in love with your song and video for “Cheap Thrill.” You directed that right?
Kfir: Yes! Thank you! I started working on the track with Chris Rodriguez in Miami in 2014 and recorded it over few weeks. Since I started working on my own sound, I been collecting visual ideas for my work as well. I either see the direction in my minds eye or using influences from throughout my life till now. I grew up with MTV when music videos where telling stories and my favorite film director is Cecil B. DeMille with his big epics. I want to tell a story and convey a thought, though there’s always room for art and beautiful imagery. I think a bit of a story line is giving the video more of longevity and character plus its more interesting. So I worked on the story board then enlisted my good friend and choreographer Deon Ridley to choreograph it, Daphne Schmon is a professional videographer she did the backstage footage and all my promo videos for my campaigns while Peter D’mitriyev shoot it with his amazing crew following my story line to the t. My best friend & family Avi Edri did all the make up and hair so there’s not much negativity or ego. We all understand each other and bounce ideas around till we come up with the best solution to accommodate all. One thing about the creation of videos and music is that I am always involved in the writing process but I always find that the project has its on life and personality and I must accommodate that as well and be flexible and let it do what it wants to a degree just like a young child.

Samara: Tell us about the song and video for “Don’t Wanna Say Goodbye”
Kfir: My sister Hila was diagnosed with Leukemia back in 2011, six months after she got married and pregnant. After 2 years of fierce struggle with it she passed away in March 2013. The song is about her. She always had sunny personality and she always felt older to me even though I am 2 years older than she was. She was so smart, loving and kind to others. So when I wrote this song I didn’t want the production to be a downer. I want it to be sunny up beat but underneath it all have a very strong emotional current. I am also in love with late 50’s and early 60’s music and wanted to have that feel in it. Today I am working on my new EP with new producers and I think I am going to remake this one again to fit its full emotional potential.

Samara: Tell us about your new EP.
Kfir: I call it Must. In the last year and so I had many work struggles, failed auditions, low employment opportunities which is how I financed this whole project till now so it took a step back. A month ago, I created my first IndieGoGo campaign to raise some funds to finish this EP I started writing in 2014. I planned on using the new producers I’ve been working with in the last year but unfortunately few weeks ago one of the lead guys got extremely sick and now I have to re- think the direction of production. Few weeks ago (with guidance from above) while working on the campaign I became friends with an amazing master engineer Alex Psaroudakis, not only that he was so genuine and kind to show me the facilities he also introduced me to this up and coming young new producer called Pablo San Martin. Yesterday, memorial day I spent the entire day with Pablo in the studio creating the leading track to the EP. Pablo is so innovative and fresh sounding that creates a fusion of emotional sound that is very simple yet grand and epic at the same time almost like a soundtrack. So I am extremely excited to be working with him and hopefully the other producer and friend can re join us. This EP has seen so many struggles that’s why I call it “Must”.

Samara: And now your concentrating solely on the music?
Kfir: I keep saying yes only the music but of course the minute I start hearing the new sound I am inspired and all the images, dance and show ideas popping into my head!

Samara: Would you say music, dance and all your creativity is something spiritual or religious for you?
Kfir: I would say spiritual, I believe its all coming from above. Every time I can’t take it anymore and think its done I keep getting inspirations floating into my head, ideas, thoughts, lyrics, images I just can’t stop it! Its either I am crazy and still the little kid who thinks he can fly or its something given to me from above. I believe it was meant to be. I get it all from above.