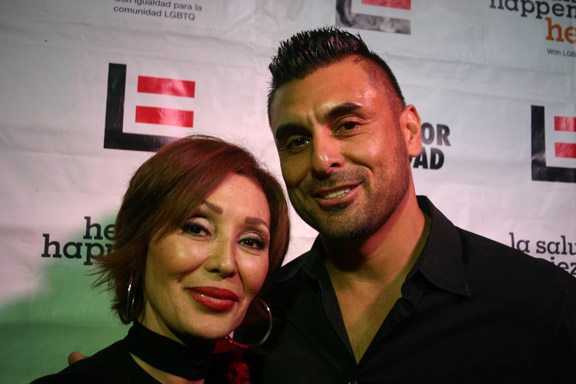 You wouldn’t think to look at or even listen to Eddie Martinez that he was once bullied in school for being overweight and having a high-pitched voice that coded him as gay to other students. But the confident, 47-year-old Executive Director of Latino Equality Alliance (LEA) was indeed bullied and body shamed. It was an experience that brought him to where he is today, an advocate for bullied teens whose organization’s mission is to promote equality for the Latino LGBTQ community.

Even something as innocuous as Martinez saying “Here!” when the teacher took attendance, provoked laughter and cruel remarks from classmates. “I had a real feminine voice so I would be afraid to raise my hand and speak.”

And though things are better now for young LGBTQ students than when Martinez went to school, a recent survey from the Gay, Lesbian and Straight Education Network reported, “LGBTQ students still face rates of violence much higher than to their peers.” And data from the Youth Risk Behavior Survey states that 34 % of lesbian, gay and bisexual students were bullied on school property, 28% were bullied on social media, and 13% did not go to school because of safety concerns.

As a child, Martinez also was overweight and relentlessly teased for that. He admits, “I understand what is to be bullied in P.E. classes and going home depressed.”

The activist has taken those former school day intimidations and turned them into lessons of empowerment for teachers, parents and students to take down bullying and encourage acceptance for LGBTQ youth.

Martinez, whose organization is housed in the new Boyle Heights LGBTQ Center, Mi Centro, explains how his anti-bullying program uses a strategic three-prong approach.  “What we do is public education in the schools, while building advocacy awareness with the parents, and promoting leadership development for young people.”

LEA counselors routinely visit with local middle and high school administrators, teachers and counselors to discuss LGBTQ rights, homo/trans phobias, bullying and health issues. Although, one would think educators should know all there is to know about bullying and LGBTQ issues, that’s not always the case.

According to The Gay, Lesbian and Straight Education Network, “Teachers report that they are less comfortable and less prepared to address the harsh conditions faced by transgender and gender nonconforming students.”

LEA’s goal is to bridge that gap between teachers and LGBTQ students by engaging them in a dialogue about issues that concern them. Martinez describes the relationship with the schools in the area as a “very supportive environment” and even brought the Gay Men’s Chorus of Los Angeles to sing with the Theodore Roosevelt High School choir.

In order to foster family support from parents, LEA staff holds “Bullying Prevention and Family Acceptance” workshops with members of the Boyle Heights’ Parent Center. Since 2014, more than 200 parents have participated in the workshop series that’s designed to create awareness on LGBTQ issues and advocacy. In a step towards family acceptance, LEA started an annual spring dance, a Youth Ball, where community members set up the event and parents prepare the food.

LEA’s third approach to anti-bullying is creating self-esteem for LGBTQ students by mentoring them and developing leadership skills.

“We really want to engage the youth and get them ready for the future,” explains Martinez. “One of my projects I want to see happen is a leadership institute, where we identify youth that come from challenging environments and guide them by giving them the tools and resources they need to graduate from high school and then go on to college.”

LEA sprang up after the passage of Proposition 8 because Latino communities were in favor of the anti-same sex marriage state constitutional amendment. “When Prop 8 passed, we looked at the electoral map and we examined all the precincts that voted in favor of Prop 8 and determined that communities like Huntington Park, South Gate, and Bell had voted up to 60% for it.”

Martinez recalls that “We didn’t have a unified voice as a Latino LGBTQ community and we weren’t at the table as we should have been with the whole “NO” on Prop 8 campaign.” After all, Los Angeles County is 48% Latino!

“So we needed to do a lot of educational work in the Latino community. In response to that outcome, we formed LEA in 2008. We went into communities like Boyle Heights and El Monte to engage people that lived there that weren’t supportive on marriage equality and had a dialogue with them about LGBTQ rights.”

It’s hard to say how much of an impact their campaign had, but polls show that in recent years there has been a significant increase in acceptance of homosexuality among Latinos. A Pew Research Center poll conducted in May showed that 56% of Latinos supported same-sex marriage. In 2006, only 30% were in favor.

Keeping up that momentum depends on the next generation. “That’s why we encourage young people to make healthy decisions, to not get caught up in the drug scene or over drinking. There are so many more options today than when I was growing up; you can get married, you can have a family. But how do we get them ready? We become role models. In order for them to make it, they have to see a future that they can be a part of and that they can be successful, happy, productive and have a voice in their community. In the past, a lot of LGBTQ kids didn’t have that. There will still be challenges, there always will be, but it’s definitely getting better.”

To support LEA or for more info, visit: www.latinoequalityalliance.org