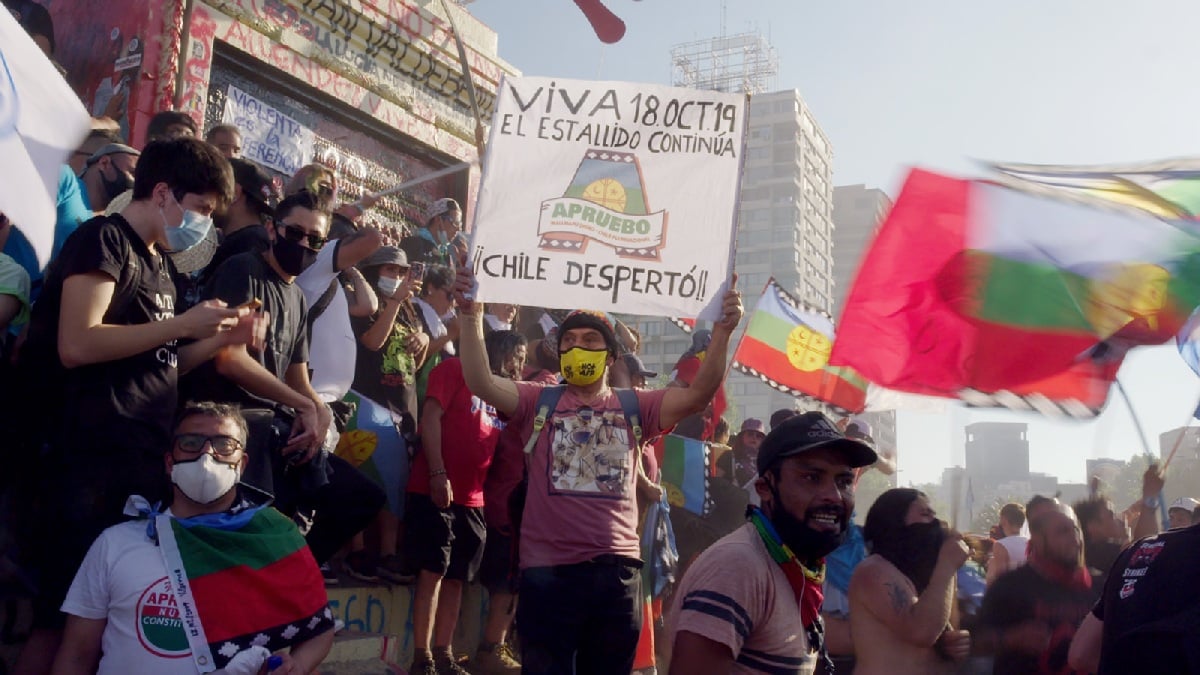 My Imaginary Country, opens with scenes that at first I thought were rocks on a sandy shore, until I realized it was concrete debris, property from streets. Written and dictected by, Patrico Guzman, a native of Santiago, Chile; his documentery is about the people, the protesters and the riots in this South American country. After Salvador Allende ruled the first sociallist presidency, Augusto Pinochet came into power and overthrough the socialist government and was there for many decades. It caused division and uproar in the country.

There are many scenes of violent protest against the police and government under the rule of Pinochet’s military dictatership. Throughout the film, many Chilean woman talk about why they are protesting and fighting back. Their reasons about not being helped from the government, saying women are forced to work hard laboroius jobs and come home with cracked hands to take care of their kids having to do their homework on the floors with no one to take care of them since 73% of the children born there are born out of wedlock.

Other reasons are about low wages with the government getting rich off cheap labor. People having to quit their jobs to take care of their elders and about changing their constitution. Civic responsibility is not taught in their schools, as another woman says, that they are taught not to talk about religion and politics. In one woman’s words, she says, they are igniting the fire to build a new Chile and that they know how to light fires, and quotes, ‘there are flames that consume, and flames that nourish.’

These woman are strong and brave to tell their sides, to stand up and fight back against a dictatership that was in rule for too long. Things needed to be changed. By the end of the film, a new young president gets elected and brings hope to the Chileans. So there is a chance for a better country and a brighter future.

With this film, these women standing up for what their believe in, shows that sometimes you do have to stand up and fight for what you want in life, in society. If an old constitution is only benefiting the rich or one class of people, then, yes, it needs to be changed for contemporary times, for all people. Who wouldn’t want this?

In order to have a working democracy, there needs to be balance with equality, unity, oppurtunity, with fair wages and giving these people opportunities to prosper in life. I hope Chile does get better for its citizens, as for all Latin America. Peace to all and peace and love to Mother Earth.

My Imaginary Country opens on September 23, 2022 in most major cities.