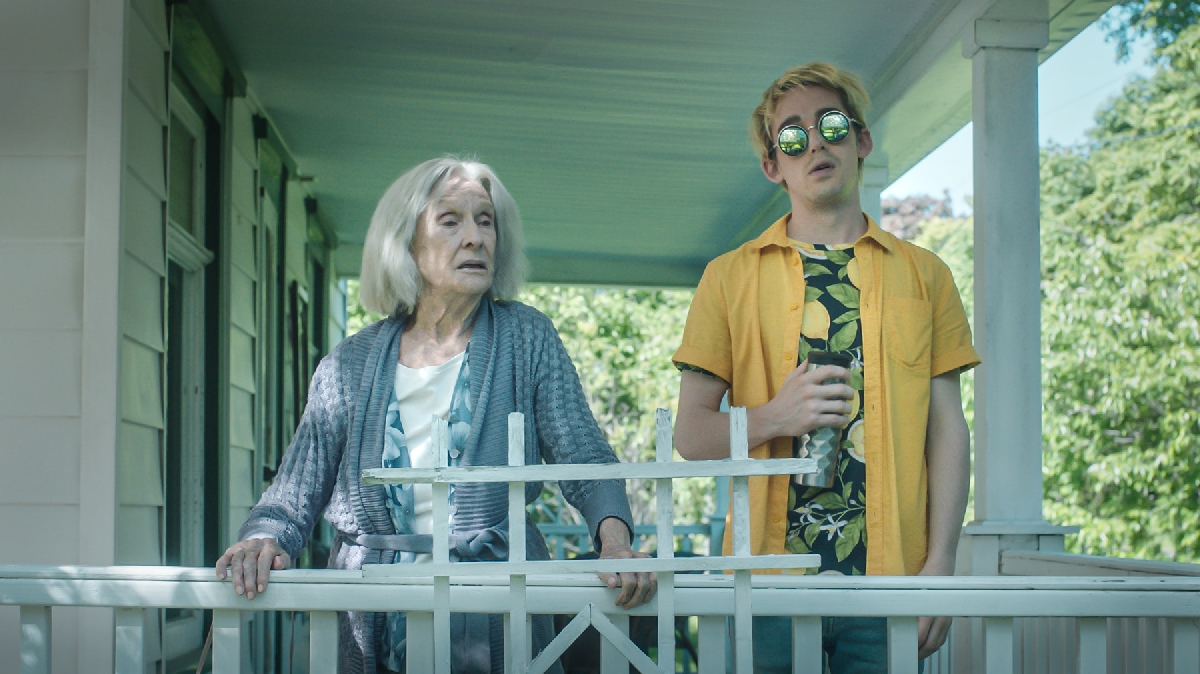 Jump, Darling, brings us a touching film written and directed by Phil Connell, his debut feature. The story starts with Margaret, an elderly woman, played by Cloris Leachman, who lives alone in the Canadian countryside. An Academy award-winning actress for 1971’s film The Last Picture Show, Leachman also won seven television Emmy’s and was nominated many times for various awards throughout her legendary 70-year career. Leachman’s character, Margaret, seems capable of taking care of herself, until she almost burns down her house when lighting the stove. Leachman is a hoot as the feisty granny with a dry wit. Leachman is more known for her classical comedic roles, Young Frankenstein, High Anxiety, and The Mary Tyler Moore Show than her dramatic performances. Her Oscar, however, was for a dramatic role in The Last Picture Show, which proves she’s adept at playing a full range of emotions. In Jump, Darling, Leachman brings her dramatic and comedic skills to a pinnacle. It definitely is her Swan Song performance before passing away in 2021 at the age of 94.

Margaret’s grandson, Russel, beautifully played by Thomas Duplessie, has had enough of his unsupportive partner who doesn’t like Russel performing in drag at gay bars. Russel decides to leave his sugar daddy to pick up his grandmother’s unused Jaguar. The self-centered diva’s not planning on staying in the small town, but when Margaret doesn’t recognize her grandson, at first, he decides he better stay until he can figure out what should be done for her. His mother wants to put Margaret in an assisted living facility, but, of course, Margaret refuses to give up her independence. Margaret’s courageous vulnerability is heart wrenching as she tries to do the simplest of things.

Russel takes over the responsibilities of taking care of the house and his grandmother, but after a while, he gets an itching to find some action. Clearly, his gaydar kicks in when he wanders into a bar that’s having it’s “gay night.” Russel flirts with Peter, the handsome bar back. At first Peter plays hard to get, but Russel is determined. When Russel signs on as the new and only drag artist at the bar, it’s deja vu all over again with the love interest who’s amused by Russel’s lip sync performances, but prefers a sexual partner who’s a little more butch. Thinking he may have a chance to make it in the small town, Russel starts stealing money from his grandmother to buy a wardrobe for his drag act and other shimmering accoutrements for his flamboyant decor.

Just as things start looking up for Russel, he meets Peter’s girlfriend. Pressing buttons is what drag queens do best and so the next time Russel goes to the bar, he does so as his alter ego, Fishy Falters, a cross between Ziggy Stardust and Hedwig, a gender bending punker. When someone asks Fishy if drag is a gay thing or a gender thing, Fishy answers, “Drag isn’t so much about who or how you fuck, as it is about saying, ‘fuck you!’. Fishy takes his punk attitude and lip syncs another great performance. Russel, as Fishy, finally wins Peter over.

Russel must decide between staying and making a life for himself in a small town with a closeted boyfriend and a grandmother who’s deteriorating or chase his dream of acting in the big city.

Jump, Darling will open at the Laemmle in Glendale on March 18 and in Palm Springs at the Camelot Theatre on March 25. Jump, Darling will arrive on DVD & VOD platforms including iTunes/Apple TV, Amazon, Google Play, Vudu, Vimeo, DirecTV, Dish/Dish Digital, and through local cable & satellite providers on March 29.