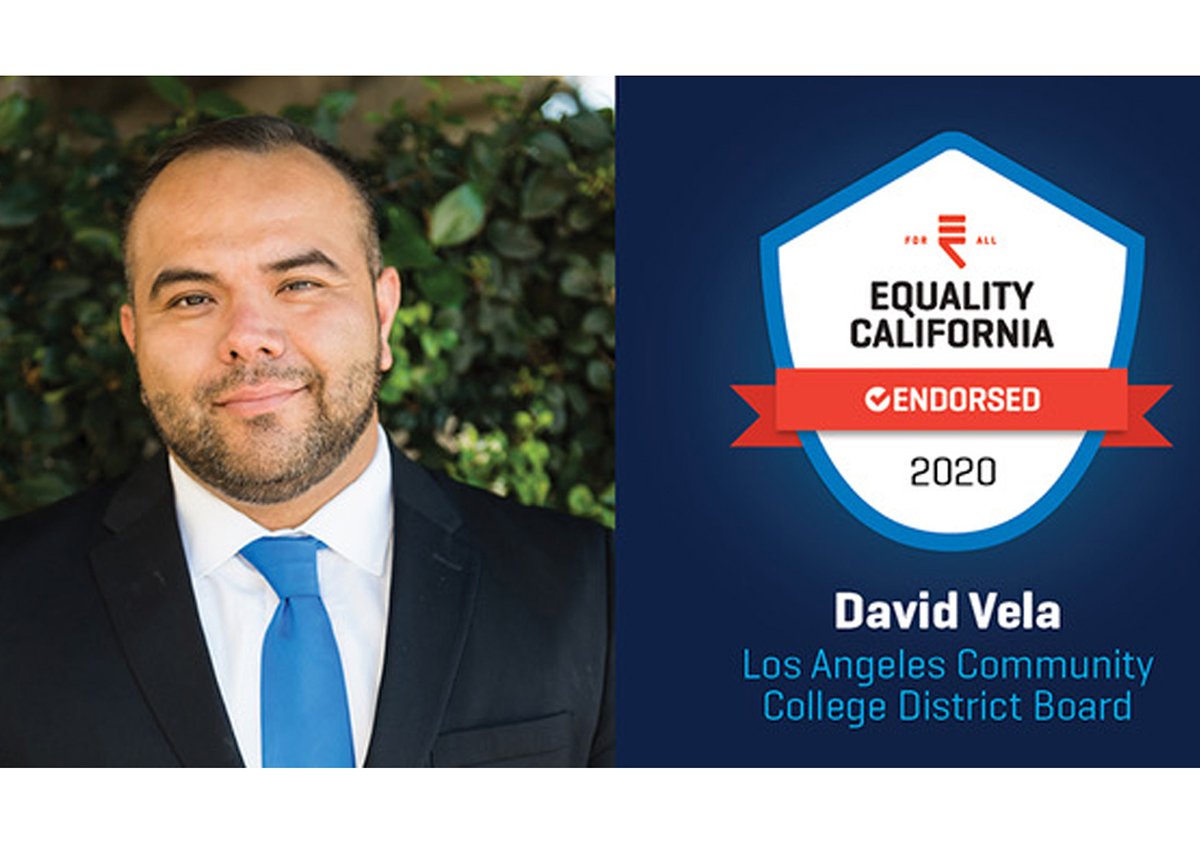 David Vela is widely considered one of the most outspoken Community College Board Members on LGBTQ+ + higher education issues in the nation. As the first and only openly gay Trustee on the nation’s largest community college district board, David Vela is highly regarded and a leading voice on student success.

Trustee Vela continued “More than ever, college students are identifying as LGBTQ+ and experiencing a lack of support such as food, housing, and health services”, Vela said. “I am committed now more than ever to fighting to ensure that all of our community college students are provided with the opportunities they need to succeed. I am proud to have earned the support of Equality California and its vast membership.”

“One of Equality California’s highest priorities is to build a bench of LGBTQ+ leaders across the Golden State,” said Equality California Executive Director Rick Chavez Zbur. “We are proud to endorse David Vela, a strong LGBTQ+ champion, for his reelection to the Los Angeles Community College Board of Trustees. David Vela is a proven leader on the Board of Trustees and we urge Los Angeles voters to cast their vote for David Vela.”

David is a founder of HONOR PAC, a Political Action Committee that supports Latino LGBTQ+ political candidates. David now serves as the first open LGBTQ+ Trustee for the Los Angeles Community College District (LACCD), representing 300,000 students, many of them who are LGBTQ+. David has been at the forefront in advocating for students and faculty as Chair of LACCD’s Legislative and Public Affairs Committee and Chair of the Chancellor’s Advisory Committee on LGBTQ+ Affairs. In this capacity, David has championed a second year of college promise, student housing, job training, job creation, LGBTQ+ Bill of Rights and completion of student certificates, transferring and A.A. degrees. He also expanded and built on the District-Wide Lavender District graduation. In addition David led the charge in creating state laws that look at college affordability, streamlining the application process, proper faculty ratios and financial aid expansion. Mr. Vela recently ensured that workforce dollars were kept in place and colleges continued to educate students amid the current pandemic. David Vela received his Bachelor of Science Degree from the University of California, Los Angeles, and holds a Master’s Degree in Public Policy with concentrations in Economics and International Relations. He owns his own Public Affairs company and lives in Montebello, CA.

Mr. David Vela has more than 20 years of experience in the public sector. In 2002, David served as Senior Legislative Assistant to former Assemblymember Jackie Goldberg, handling Labor, Transportation, and Economic Development. David also served as Senior Advisor to the Employment Development Department under former Governor Gray Davis’s administration. After his time in Sacramento, David spent 10 years as a Senior Deputy to Los Angeles County Supervisor Gloria Molina. In this capacity, David oversaw two billion dollars in capital infrastructure improvements in Unincorporated East Los Angeles. These projects included the East Los Angeles Civic Center, the Eastside Gold Line, and the Whittier Boulevard Streetscape project. In 2012, David served as the Chief of Staff to the Chair of the Assembly Committee on Labor.

From 2007-2015, David served on the Montebello Unified School District (MUSD) Board of Education as the first openly LGBTQ+ School Board Member. Mr. Vela is credited with implementing a near-perfect attendance program which improved the District’s Average Daily Attendance to over 96%. David contributed to increased API and AYP scores as well as a 94 % district graduation rate. Furthermore, Mr. Vela implemented College Bound Today — a college preparatory program, which matches mentors with high school sophomores to guide them through the college application process and championed dual enrollment for students at East Los Angeles College. David Vela has been a champion for linked learning and spearheaded one of the only pathways high schools in the United States, the Applied Technology Center. Mr. Vela’s tenure on the Board also included the successful passage of the first Project Labor Agreement (PLA) in MUSD history for an anticipated $600 million school bond to modernize classrooms and schools for the 21st century.