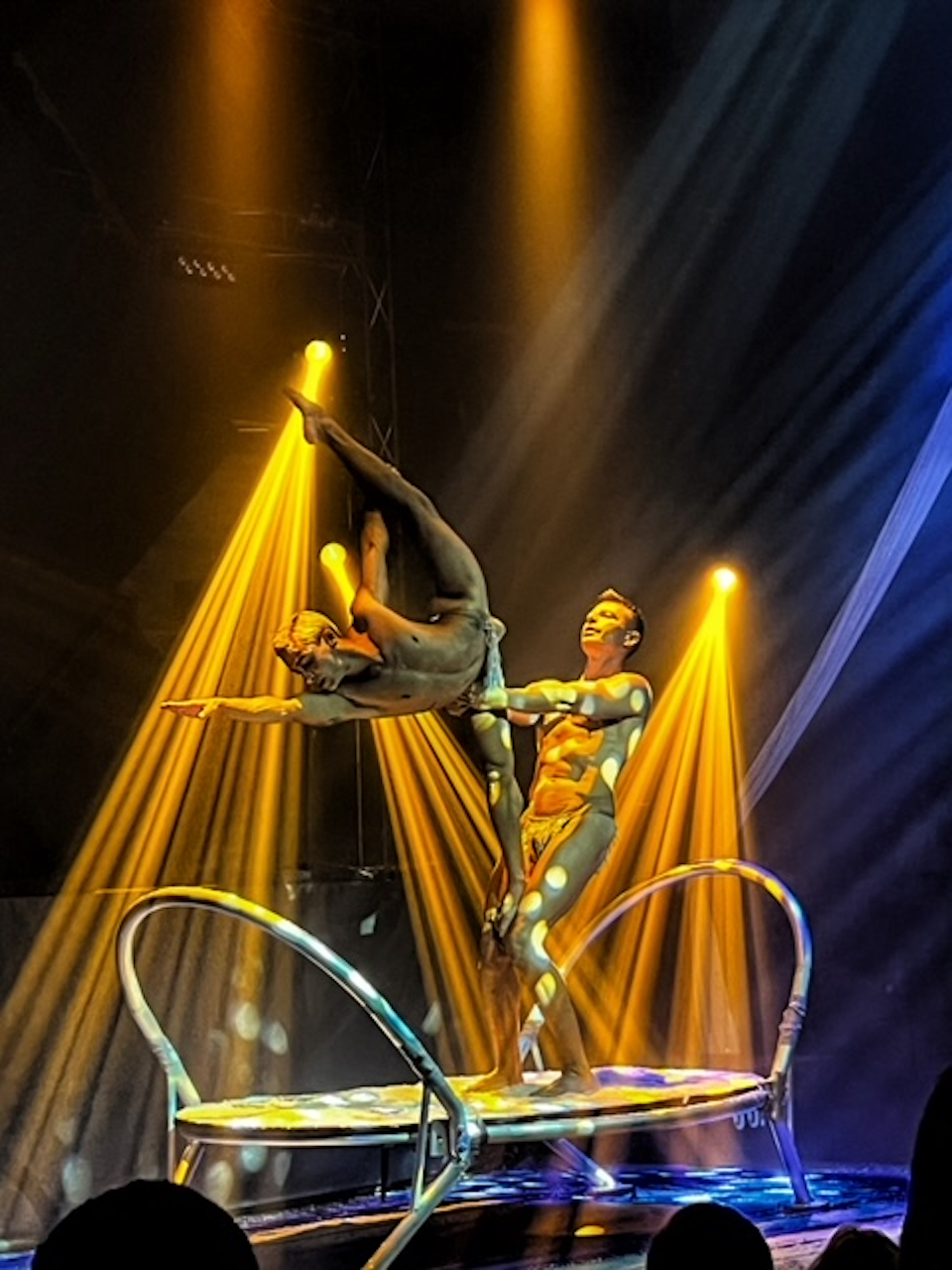 There are many reasons why people love to visit Puerto Vallarta, and AirOtic Soirée may be one new reason to get your next plane ticket. This is absolutely a world-class performance at Club Industry that combines a circus show with the excitement of a cabaret, all performed by stunning aerial acrobats with Adonis-like physiques. This performance is a stunning aerial acrobatics show celebrating sensuality, passion, and love.

The show started in 2017, following a performance on Italy’s Got Talent, where this circus company made it to the finals. It brings together the incredible gifts of the creator, Stephane Kier and his husband Kyle, along with the gifted and beautiful team that amaze the audience with their gymnastic skills and stunning bodies.

At age 6, Stephane started gymnastics and spent many years on the Italian Olympic Gymnastics team. At 17, he left the team to study fashion design in Paris, France and began street performing to earn income while in school. Through these sidewalk shows, he met several people in the entertainment industry and began working in television and theaters. To master the art of acrobatics, Stephane decided to attend circus school, while continuing his education in fashion. The genesis of the company came from an invitation to perform at a corporate event, where Stephane designed and produced the costumes for the performers, all of whom were studying at the French circus school.

In 2016, Stephane and Kyle conceived and developed a production with an LGBT focus, AirOtic, and debuted it on an Atlantis gay cruise. The production has traveled the world with a company that had over 150 talent members on cruise lines such as Norwegian, Royal Caribbean, and Celebrity, as well in venues in Barcelona and Sitges, Spain, Fort Lauderdale, Chicago, Provincetown, and is currently performing in venues in Washington DC, Palm Springs, and Puerto Vallarta.

“The show is a celebration of sensuality and love,” describes Stephane. “Right now, in Puerto Vallarta, we have an entire male cast, but in the other version of the show there is a girl, so there are acts between a boy and a girl and other acts between two boys. A lot of people come to the show that don’t know there is a lot of gay content. A lot of people come to the show, and they see that there is a sensuality between boys, and it’s done in such a way that it’s beautiful.”

As with many other industries, COVID and its related pandemic forced major changes for the company, as several of the ships and their crews were stuck at sea and had difficulty to disembark, leaving their talent stranded sometimes in different countries. Both passengers and crew of the ship became ill from the virus, and over 120 of the circus company’s talent were trapped on board or in other ports, creating a logistical nightmare to return them all to their home countries.

During the previous five-year run with the Atlantis Cruises, Stephane was introduced and came to love the city and people of Puerto Vallarta, as the ship always stopped at this gay-friendly city. Last November, he met with the owners of Club Industry and in February began the twice-weekly performances at this new venue.  Since its introduction, the show has sold out with its 150-person capacity theater, and the audience has absolutely loved the performances. There is a definite buzz around the city and most of the tickets are sold through the word of mouth of those that have seen it.

“Everyone can identify himself in one or more of the acts,” explains Stephane. “There’s one song ‘Creep’ in an act. We all go through some stuff being gay and growing up, and first we have to accept ourselves and then we have to try and make society accept us. So, I think every one of us gets emotionally touched by one part or another of the show.”

Stephane and Kyle started to create an LGBTQ show stemming from the company’s participation with Italy’s Got Talent in 2015, where they made it to the finale.  At the end of the breathtaking performance, Stephane got down on his one knee and proposed to Kyle. That video went viral, with more than 4.5 million views by the following day and a later call from the European Union to the Italian government to support LGBTQ rights.

“People should definitely come and check out the show,” says Stephane. “It’s a circus, it’s acrobatics, and all of our acrobats are very talented. But also, there is authenticity behind the show. We are who we are on stage, and we are enjoying what we do and we take a lot of pleasure in performing which really comes out when we do the show. We are sharing our passion, our freedom and our way of living with the audience.”

With the lifting of restrictions on the cruise industry, the circus company will likely return to some of the cruise ships in the future but hopes to create more productions where they will hold residency in venues around the world.

If you miss the show in Puerto Vallarta, it will be moving to a new venue in Mexico City at the ‘Love Polanco’ club starting in May. To connect or follow this circus company, connect with them on Facebook or Instagram @AirOticShow or their website http://www.airoticshow.com/