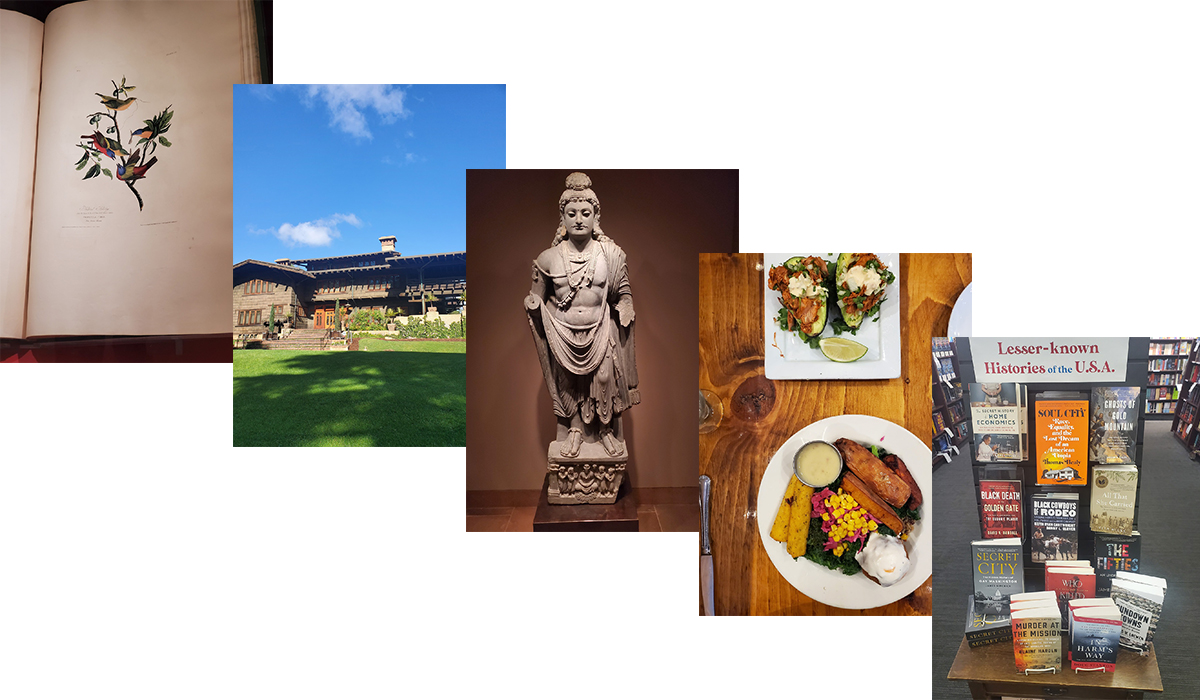 As VisitPasadena https://www.visitpasadena.com/things-to-do/ notes, there is a lot for visitors to do in this suburb of Los Angeles besides the New Year’s Day Tournament of Roses, with its flower-covered floats, and the Rose Bowl football game afterwards (the Bowl’s flea market is also a major draw on the second Sunday of each month). Incredibly, its 600 restaurants give Pasadena more per capita than New York City. It is also a center for advanced tech development, with the California Institute of Technology (made famous in the Emmy-winning comedy “The Big Bang Theory”) and the Jet Propulsion Laboratory, which has played an important role in the space program. And in its foothills is the 2000-acre Eaton Canyon Nature Center. Here are what we crammed into a couple of days there.

In our first Cool Things to Do in November 2020, we visited the Huntington Library, Art Museum, and Botanical Gardens
https://www.huntington.org/ when it opened its spectacular new Chinese Garden, one of a dozen areas covering 130 acres, focused on plants ranging from Australia to the world’s deserts. The library and art museum were not open then, so we recently returned to visit them. The library has changing exhibits of its 11 million items and we saw Miguel Cervantes’ Don Quixote printed in 1755, handwritten decipherments of encrypted Civil War cables, enormous volumes showing the birds of America hand-painted by John James Audubon, and a typed draft of Octavia Butler’s science fiction classic Parable of the Sower. The 42,000-strong art collection in several buildings focuses on European art from the 15h to the early 20th centuries and American works from the colonial period to the present. Among them are prints by Francisco Goya, the sculptures of Frederic Remington, and Thomas Gainsborough’s masterpiece in oil “The Blue Boy.”

Pasadena is known for dozens of specialty stores, such as Canterbury Records (L.A.’s oldest used record, CD, and videotape shop) https://www.canterburyrecords.com/ and Comics Factory (with one of the region’s best selections) https://www.comicsfactory.com/.
We could have been lost for days at the enormous Colorado Blvd. location of Vroman’s Bookstore
https://www.vromansbookstore.com/, the oldest and largest independent bookshop in SoCal and a frequent place for author signings and panels (there is a second store on Foothill Blvd.). The science books are especially strong, with titles like An Immense World: How Animal Senses Reveal the Hidden Realms Around Us and histories of earthquake prediction. Local travel and discovery books are full of surprises for those who think they’ve done everything, such as Secret Stairs: A Walking Guide to the Historic Staircases of Los Angeles. The LGBTQ shelves have the hilarious and shocking Bad Gays and the Hispanic section features the important An American History of Cuba. A volume hard to find elsewhere: Wake: The Hidden History of Women-Led Slave Revolts. You can peruse Dawn at Mineral King Valley before buying this history of how a legal battle between the Sierra Club and Disney over its development of a ski resort led to a new era of environmental law. There is a section devoted to books by and about Keanu Reeves and every kind of test prep book you might ever need.

We previously reported on the fascinating tours of Los Angeles neighborhoods by Laura Massino Smith which reveal we have the most diverse architecture in the world per square foot, thanks in large part to the influence of early film industry leaders from other countries. Her Architecture Tours L.A. https://www.architecturetoursla.com/ (book via [email protected] or 323/464-7868) focuses on a handful of areas, including one of Pasadena, which has 23 neighborhoods designated historically significant and so have preservation regulations. She tells you about the architects and owners and the details of the design elements and materials (redwood was popular in all homes because of its resistance to termites). We started the 2.5-hour tour at the city’s most famous landmark home, Gamble House, designed and built in 1908 by Greene & Greene and considered one of the finest examples of the American Arts and Crafts Movement in the early 20th century. Craftsman homes showed a variety of influences, including Japan (integrating landscaping with the building) and Britain (their artisans used stones and hand-finished bricks in reaction to the elaborately manufactured Victorian houses). She explained the distinctive aspects of other popular styles, such as American Colonial Revival and Tudor, and we cruised by the spectacular City Hall, Cal Tech’s symbolically decorated science buildings, the 22 lively blocks of Old Town, and the great estates of neighboring San Marino (where Huntington Library is located).

Sage Plant Based Bistro
https://www.sageveganbistro.com/ is widely regarded as the best gourmet natural food restaurant in SoCal. It is located in a brick entertainment complex near Fair Oaks and Union, so plan to park a couple of blocks away and walk. It has an unusually long menu of alcoholic drinks for this type of restaurant, as well as “mocktails.” The dishes we tried were hearty enough to share, including the Jackfruit Stuffed Avocado, the Buffalo Cauiflower Pizza, and the Bowl of Soul (roasted sweet potato, black beans, quinoa, grilled corn, sauteed kale, polenta cake, a mac ‘n’ plant-cheese ball, tossed in spicy buffalo sauce with spicy pickled cabbage, and garlic aoli). We were astounded at how fast the meals were served.

Norton Simon Museum
https://www.nortonsimon.org/ is a world-famous art museum, but somewhat locally underappreciated in the shadow of bigger names. It has 12,000 objects from the past 2,000 years in its collections, about 1,000 on display at any given time. The first ones encountered on approach outside are sculptures by Rodin. The first floor inside is most notable for its impressionists, especially Cezanne, Monet, and Matisse. Picasso, Peter Paul Rubens, and Diego Rivera are also well-represented. But the real treasure is in the lower floor, a truly extraordinary collection of sculptures from ancient Greater India 100-1400 A.D., with maps showing the timeline for the various empires in which they were produced. Many, such as the Bodhisattva Maitreja made of schist in third century Pakistan, are surprisingly pristine (see photo). Another exquisite small piece was the Bodhisattva Manjusri made in 9th century Kashmir of bronze with silver and copper inlay.