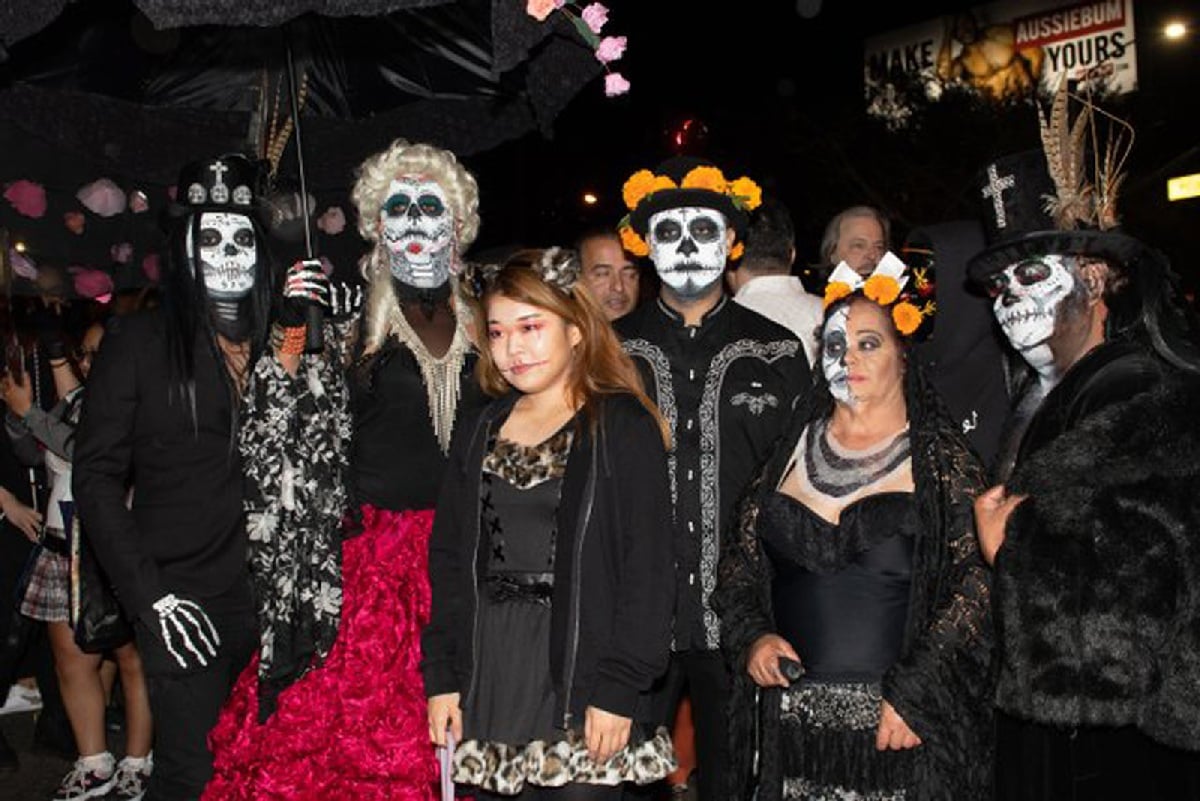 West Hollywood
https://www.visitwesthollywood.com/ is known worldwide for its Sunset Strip nightclubs and music venues (like the Whiskey a Go Go, Viper Room, Rainbow Gar & Grill, and Roxy Theatre), as well as restaurants and luxury hotels where celebrities are often seen. But it’s much more than that, as we know as residents, though most of us would prefer it not be such a popular destination, making the traffic worse and the streets abuzz at all hours. But with the initial announced revival of the world’s biggest Halloween street parade (an official city holiday) after skipping two years, we thought it was the right time to put the spotlight here. As it turned out, it was announced in late August that it would be cancelled again, this time because of the challenges of managing the crows. Whether it comes back at all remains to be seen, but lots of people from all over will no doubt show up in costumes for an informal strolling of the area and we’ve left the description as is below, hoping it will resurrect.

The boundaries are hard to understand because WeHo (as everyone here calls it) was put together from pieces of unincorporated parts of L.A. County in 1984. Very roughly, the western boundary is Doheny Dr.; the northern gradually drops from Sunset Blvd. to Fountain and ends at La Brea; the southern is a few blocks south of Santa Monica Blvd., running west until La Cienega, where it drops down to Beverly and ends at Doheny. You really have to look at a map to understand the details.

Halloween Carnaval
https://www.visitwesthollywood.com/halloween-carnaval/ has long had half a million visitors from all over the world and by 9 p.m. Santa Monica Blvd. between La Cienega and Robertson is so packed that you can hardly move (so best to take mass transit or a ride to get as close as you can as early as you can, then walk). You don’t have to join the street parade (or one on the sidewalks), but you can count on the pent-up creative energy of makeup and costume mavens being unleashed. Alas, there are no longer great local Halloween costume stores, so you need to go to Aahs! in Westwood, Adele’s and Hollywood Toys & Costumes, or Halloweentown in Burbank.

The Comedy Store
https://thecomedystore.com/ on the Strip recently celebrated its 50th anniversary and it continues to sell out many nights, so don’t wait too long to reserve seats to see stars of stage and screen and up-and-coming talent. You can see the names of those who have appeared written in white all over the black building. Among the hundreds: Marc Maron, Sandra Bernhard, Johnny Carson, Jim Carey, Dave Chapelle, Billy Crystal, Whoopi Goldberg, David Letterman, Eddie Murphy, Robin Williams, Richard Pryor, Kathy Griffin, Jerry Seinfeld, George Carlin, Cheech & Chong, Chelsea Handler, Michael Keaton, Garry Shandling, Sarah Silverman, and Chris Rock.

Where Humans Are the Companion Animals
West Hollywood probably has more pets per person than anywhere else in the known universe and they can pretty much go anywhere together they wish. We previously reviewed Urban Pet on La Brea and the indoor Citydog Club nearby on Santa Monica Blvd. WeHo also has one of the best public dog parks in the region (one enclosed area for the small ones, another for large), located on the west side of San Vicente a block south of Santa Monica Blvd. (the artificial turf is cleaned daily). Such parks have become popular for people who like socializing with those who share their love of our best friends.
Weho is also full of hotels that welcome pets of all kinds, but many restaurants with outdoor dining also cater to critters and their humans, according to a list on VisitWestHollywood. Among them are Shake Shack (see photo), which offers four-leggers a Bag o’ Bones (5 biscuits they make with vanilla custard and peanut butter sauce), Justin’s Queso, which serves the Kelly Barkson Bowl, and the Conservatory, with its Puppy Hour menu that includes filet tips and oat cookies.

Specialty Retailers and Services
The city is full of specialty retailers and service providers, from the previously reviewed Book Soup (“bookstore to the Great and Infamous”) to the 250 businesses in the Design District. Some other faves:
Block Party https://blockpartyweho.com/ claims to be SoCal’s largest Pride store, which is fitting given the city as the location for the original HBO series “The L Word” (2004-09) and the fact that about 40% of its citizens identify as LGBTQ. Known as the Bloomingdales of Boystown, it has a wild smorgasbord of every kind of well-designed clothing you need at great prices (some with hilarious slogans). There are also contact lenses that can change the color of your eyes, fragrances for men, cannabis to aid sleep, transparent backpacks in gorgeous colors, caps and hats covered in rhinestones, and fun books, calendars, artwork, and more.
Koontz Hardware is renowned as the place to go in SoCal if you need obscure parts or expert advice, making it a true destination for out-of-towners. Their available merchandise is so unusual and ever-changing that they don’t bother with a website and frustrated fans created this one to explain why they love it: http://koontzhardware.com/

Skin Perfect Medical Aesthetics
https://skinperfectmedical.com/skin-care/ is a new location for clinics that are highly-regarded for their medical-grade treatments that distinguish it from others (other locations are Whittier, Rancho Cucamonga, Glendora, Brea, Costa Mesa, and Lancaster). Sandra had a painless microneedling treatment, a non-surgical solution using the FDA-approved Skinpen to clear away wrinkles, fine lines, hyperpigmentation, and mild to moderate scarring. By making micro-channels in your skin, this prompts the body to release restorative properties to rebuild the structure of the dermis. The secret to increasing your collagen production naturally is revitalizing the semi-dormant cell receptors, with the skin becoming better over weeks and months. Skin Perfect also offers Botox, laser, ultrasound, and radiofrequency treatments, dermal fillers, and a thread lift that tightens skin as an alternative to a much more invasive and expensive facelift.

Alternative Treats
You can find somewhere in WeHo that will cater to your foodie obsession, no matter what it is. We refuse to spend a lot of money wining and dining ourselves on a restricted diet, but there are some places that can provide what you definitely can’t cook up on your own:
Cake and Art
https://www.cakeandart.com/ on Santa Monica Blvd. (see photo) has been baking its customized artistic cakes for over 45 years, so not just the city, but the entire nation, is addicted to their delicious recipes. Your fantasies, naughty or nice, become a reality when these geniuses use a special process to turn your photos or other pix into 3-D sculptures. Let them eat this cake, say stars such as Oprah, Britney, Cher, Dolly, President Bill, and Lady Gaga.
Vromage https://www.vromage.com/ on Sunset claims to be the first “vegan cheese” shop, with everything from goat chive to feta basil made from seeds and nuts, not only for the purest vegetarians and the lactose intolerant, but adventurous gourmands. You can order online, eat sandwiches and pizza inside, or ask master cheese-maker Youssef Fahouri to cater your party.